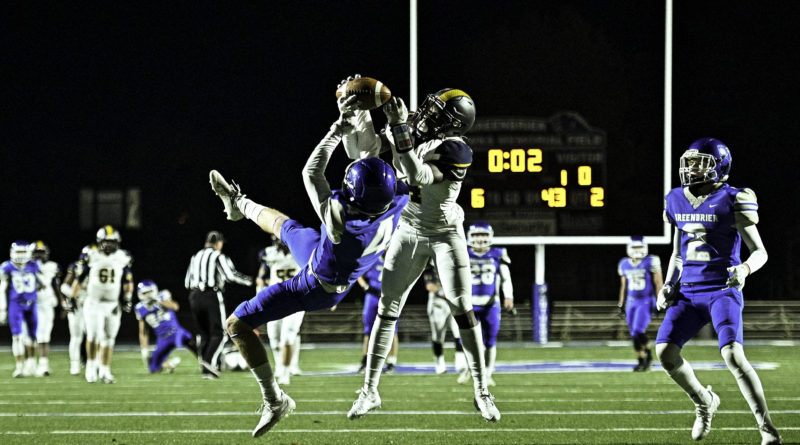 GREENBRIER — Cooper Wilcox stayed healthy long enough to get the Greenbrier Panthers to the semifinals of the Class 5A state playoffs Friday night at Don Jones Stadium.

Wilcox, the Panthers senior quarterback, suffered a shoulder injury on the 5-yard touchdown pass he threw to Jacob Mathis at the 11:57 mark of the second quarter. Wilcox never returned to the field and was replaced by sophomore Kane Griffin.

The touchdown pass gave the Panthers (12-0) a 7-0 lead, propelling them to a 14-0 victory over Wynne (10-2). Greenbrier will play Pulaski Academy a 56-25 winner over Magnolia, in the semifinals and Wilcox has been ruled out of the game.

At the time, Wilcox went out of the game he completed 9-of-10 passes for 68 yards and the Panthers had all six of their first downs in the first half.

With him out, Greenbrier didn’t pick up another first down until midway through the third quarter. As a result, the Panthers’ last nine possessions of the game ended with eight punts and one interception. The Panthers finished with 209 yards in total offense (141 rushing and 68 passing). Griffin completed 1-of-8 passes for zero yards and threw 1 interception.

“It was a different story when he was out,” said Greenbrier Coach Randy Tribble. “We lost a lot of experience. Cooper has taken all of the meaningful snaps and gets all of the reps in practice. The main thing was after he went out was we had to block a lot better because they had a lot of speed at linebacker. We were also trying not to turn the ball over.”

While Wilcox’s injury changed the complexion of the game, Wynne Coach Van Paschal had nothing but praise for his defense which kept his team in the game. “Our defense played hard and gave us a chance, but we had the turnovers early on and that hurt us. We didn’t make enough plays on offense.”

Wynne finished with 165 yards rushing and no passing yards as quarterback John Watson misfired on all four attempts and was intercepted once. Timmy Watson led Wynne with 88 yards rushing on 18 carries.

Wynne, which had nine first downs, lost four fumbles and turned the ball over on downs three times. Their best chance came with 7:02 left in the third quarter. A 20-yard run by Timmy Watson gave the Yellow Jackets a first down at the Greenbrier 18. After a 1-yard run by John Watson, an errant pitch to Alonzo Holmes resulted in a fumble recovered by Greenbrier’s Eli Weaver.

“I can’t say enough about our defense,” said Tribble. “If you shut out a team, you can’t lose.”

Greenbrier’s Keaton Whitley sealed the victory with 21 second left when he recovered an errant lateral in the end zone after Wynne’s Demarrius Maxwell attempted to lateral the ball to Javion Holmes on a punt return on a desperation play.

With Wilcox out for the semifinal game, Tribble said he expects Griffin to play better given that he will get all of the reps in practice, adding the Griffin normally doesn’t get a lot of work with the starting offense during the week.

Pashcal, with his team’s season coming to an end, said, “I’m proud of them. We showed a lot of heart and left it all on the field.”