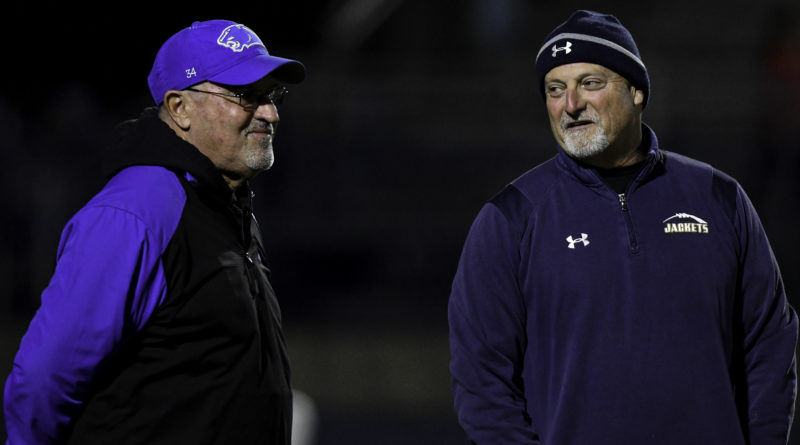 The Hornets’ offensive and defensive lines were dominant and Northside had no answer for the physicality on either side of the ball as Bryant led 28-3 at halftime.

The Bulldogs overcame a 21-point deficit to pull out the win and will host Conway with a state title game appearance on the line next week.

The Wampus Cats erase the bad feelings of a disappointing loss to Bryant in the regular-season finale two weeks ago with an easy win and a ticket to the semifinals.

The Charging Wildcats score with 11 seconds remaining to stun the Tigers after they had stolen the lead on a 90-yard punt return.

The Saints didn’t light up the scoreboard against the Panthers, but they didn’t have to as the defense pitches the shutout, giving up less than 30 yards rushing.

The Bruins offense resurfaced after an off night in a win over Harrison last week to cruise into the semifinals with an easy win over the Panthers.

For the second straight year, the Tigers are ‘upset’ by a 7A-Central team at home in the playoff quarterfinals.

The Panthers’ nine-game winning streak comes to an end in stunning fashion as the No. 4 seed Patriots dominate in the second half, going on a 31-9 run.

The Bulldogs again show why they have one of the best defenses, regardless of class, holding the explosive Cardinals offense in check on their home field.

The Panthers looked well on their way to an upset with a 21-point cushion but couldn’t contain the explosive Bulldogs offense in the second half.

The Patriots notch a statement win over the No. 1-seeded Hurricane and are now a win away from the state championship game.

The Grizzlies played with Bryant in early October but were outmatched Friday night from the beginning.

A month ago, a battered Greenwood team didn’t look capable of a long playoff run, but now the Bulldogs will host a semifinal game with 6A-West Conference foe Little Rock Parkview looking to avenge an earlier loss and get back to Little Rock for the second straight season.

The Wolves finish the season losing three of their final four games after starting 8-0.

The Hurricane finish the season on a two-game losing streak.

The Warriors, a No. 3 seed, are playing more like the program that has appeared in three straight state championship games as they easily advance to the semifinals to try to avenge a loss against White Hall.

The Wildcats jumped out a 28-0 lead and never looked back and now will be a favorite to beat Marion in the semifinals at home next week.

The good news is the Panthers are playing in the semifinals. The bad news is they will play without dynamic senior quarterback Cooper Wilcox, who didn’t play in the second half with a shoulder injury.

A magical season ends in disappointing fashion as the Warriors’ defense shuts down the Raiders’ explosive offense.

The Yellowjackets’ defense only gave up one touchdown, but the run-oriented offense never got going against the Panthers.

After two straight weeks off, the Lumberjacks had Trumann eliminated by halftime and now have a rematch with Stuttgart, which they handled easily in September.

The Redskins’ Connor Baker has run all over defenses this season but not Friday as the Senators pick up their 11th win in a row.

The Ricebirds’ offense explodes and will need all of that firepower to avenge an earlier loss to Warren next week.

The Mountaineers made great strides this season, but they were no match for the mighty Wampus Cats.

The Cardinals were ineffective against the lockdown Bulldogs defense but finish a great season with a conference title and their only other loss coming to Class 6A El Dorado.