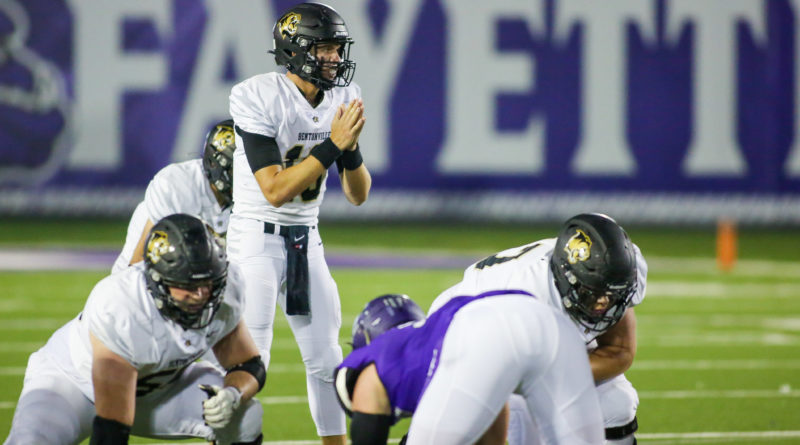 The first week of the playoffs offered some thrills and chills, but this week promises to be even more exciting as all of the better teams are playing and the field is evening. There are trips to the semifinals on the line in 7A, 6A and 5A and all teams are excited about the prospects of playing on Black Friday.

Below is a list of the Top 10 prep football games in Arkansas this week.

A matchup of two tradition-rich programs that win with physicality. North Little Rock has appeared in the Class 7A state championship game each of the past five seasons, and its only losses are to title contenders Bryant and Conway. North Little Rock won at undefeated Bentonville, 42-24, in the 2019 7A semifinals.

Charging Wildcats junior Malachi Gober has filled in well for departed star Kareame Cotton. Classmate Torrance Moore has run well behind a big, physical line, and NLR has several other backs that can carry the ball.

The defense is led by versatile lineman Braxton Johnson, who lines up inside and on the end. He battled a leg injury but has gotten healthier. NLR senior safety Jonathan Grayson picked off two passes and returned one for a touchdown and returned a fumble for a touchdown in a blowout win over Fort Smith Southside last week.

Bentonville had won 35 straight conference games until a close loss to another title contender, Fayetteville, in October. The Tigers also lost to Conway on a night they turned the ball over six times. The Tigers beat Liberty North, a Kansa City, Mo., metro program that has one loss and is ranked No. 3 in the SBLive Missouri Top 25. The Eagles are in contention to win the state title in Missouri’s largest classification.

Tigers junior running back Josh Ficklin, who picked up an offer from Memphis, also has the benefit of a big line. Junior Joey Su’a, an Arkansas commit, anchors the line. The offense also features senior receiver Chas Nimrod, a University of Tennessee commit.

The Panthers could be a dangerous draw for the 7A-West Conference champion Bulldogs.

The Panthers’ only losses came to title contenders Bryant, Conway and North Little Rock. After a blowout win over Springdale Har-Ber last week, the Panthers might be hitting their stride. A year ago, Cabot stunned favored Bentonville on the road.

Cabot relies on big-play receiver Braden Jay (1,125 receiving yards) to make big plays lining up all over the field. Senior quarterback Grant Freeman (1,862 yards passing) has improved steadily throughout the season and classmate Mason Bell bolsters a solid run game. Defensively, Cabot is deep on the line and aggressive.

The Bulldogs have one of the top collections of talent in the state. Isaiah Sategna (more than 1,300 yards receiving) is one of the top receivers in the country and recently flipped his commitment from Oregon to Arkansas. His classmate and good friend, quarterback Bladen Fike, is having a monster season, passing for nearly 3,000 yards, and just received an offer from Middle Tennessee State. Sophomore running back Omar Murray is one of the best young backs in the state.

Defensively, the linebacking corps is stellar with Indiana commit Kaiden Turner and Arkansas commit Mani Powell. Senior cornerback Jaxon Taylor is a ballhawk and returned a key interception for a touchdown in the big win against Bentonville last month.

Undefeated Bigelow is one of the favorites to advance to Little Rock and the state championship game, but Hazen won’t be intimidated. They’ve already knocked off title contender Clarendon this season.

Bigelow is led by senior quarterback Keithlen Brown, who has racked up nearly 1,700 yards of total offense. Senior running back Hunter Alexander has accounted for 1,072 yards on the ground.

This will be Bigelow’s first game in two weeks after ending the regular season with a bye and last week winning by forfeit over Mineral Springs.

The Grizzlies stood toe-to-toe with the three-time defending Class 7A champions in early October. The Hornets needed a goal-line stand on fourth down in the fourth quarter to preserve a 35-17 win.

Northside features two of the best running backs in the state in seniors Ty Massey and Sundquist Church. Both players have eclipsed the 1,000-yard mark this season.

Bryant’s offense is bolstered by a talented group of senior linemen, including Division I recruits Will Diggins and Brooks Edmonson. Junior running back Chris Gannaway (838 yards rushing) has improved, as has sophomore playmaking receiver Mytorian Singleton. Singleton caught the go-ahead touchdown pass against Conway late in the game to seal the comeback win. Senior quarterback Carson Burnett can run and pass and his performance was also an aid in the Conway win.

The Wolves broke a two-game losing streak by rolling past West Memphis in a first-round 6A playoff game last week.

The Wolves have used a run-oriented attack all season to gouge opponents with a big offensive line including one of state’s best in Chase Jessup. Both senior Tevin Hughers and junior Justin Crutchmer have run for more than 1,000 yards, but the Wolves’ offense has become more dynamic with the recent addition of sophomore quarterback Easton Hurley, who passed for more than 200 yards last week.

El Dorado’s high-octane attack runs though senior QB Sharmon Easter, who has passed for nearly 3,000 yards with 36 touchdowns and just 4 interceptions and rushed for 702 yards. Running back Shedarious Plummer has run for 934 yards and 17 TDs.

Hurricane fans want to know which team will show up: The one that won six straight conference games and topped El Dorado or the one that lost to middle-of-the-pack Marion in giving up more than 300 yards rushing?

The Hurricane are paced by senior quarterback Ryker Acebo, who has passed for nearly 2,900 yards and 36 touchdowns. Receiver Kavon Painter (969 yards and 15 touchdowns) is his favorite target.

Parkview is talented and deep with seven players who have received Division I scholarship offers. Senior quarterback Jaylon White, an Ole Miss commit, is feeling better after being hampered by a leg injury the first part of the season. He has passed for 1,613 yards and 14 touchdowns. Senior running back James Jointer, a University of Arkansas commit, has run for 1,138 and 14 TDs.

This will be a clash of one of the best defenses regardless of class against an offense full of stars.

The Bulldogs have been iron-clad on defense all season, and they dominated high-flying Farmington 31-17 last week. Standout defensive back Braylon Johnson took the opening kickoff 99 yards for a TD and they never looked back.

The Cardinals didn’t play their best last week after getting ahead of Greene County Tech 26-7 and barely hanging on 26-21.

Junior Arkansas baseball signee Martavius Thomas had a good game at QB, completing 16 of 20 passes for 241 yards and two scores. He ran 11 times for 95 yards. Senior receiver Brandon Copeland (112 yards receiving and a TD against GCT) is a big playmaker, as is senior running back  Jacoriae Brown (10 rushes for 70 yards and a TD).

Both teams had to come from behind to pull out playoff wins last week. The Panthers trailed 28-14 before prevailing 31-28 on a 34-yard field goal by Bradley Turnage with just over a minute to play. Wynne outlasted Hot Springs Lakeside 47-34.

This is a contrast in styles. Greenbrier is multidimensional and can score quickly. Dynamic senior quarterback Cooper Wilcox has passed for 2,144 yards and 25 touchdowns. He is also dangerous running the ball, totaling more than 50 yards and a touchdown against Maumelle. Junior speedster wideout Carter McElhaney is a threat for the big play and Jacob Mathis, who also plays linebacker, is a reliable pass catcher. Senior Nick Huett has been a big contributor at running back and linebacker. Linebacker Eli Weaver had eight tackles last week and stopped Maumelle’s final drive with an interception in the end zone.

The Yellowjackets run the flexbone to perfection. Diminutive senior slotback Carl Washington (125 yards rushing against Lakeside) is hard to tackle and senior fullback Kobey Davis is a bulldozer, terrorizing Lakeside for 145 yards rushing and a touchdown. Senior quarterback John Watson orchestrates the offense and ran for 85 yards and two scores last week.

Many pundits were high on LRCA as they entered a first-round road game with Vilonia. The Warriors answered the call and drilled the Eagles 53-29. The Warriors, who have been to the state title game each of the past three seasons, now travel to undefeated Nettleton, who are much more inexperienced in the postseason than LRCA but did take care of Hot Springs with ease, 33-14.

LRCA is explosive with senior running back Jayvean Dyer-Jones, who ran for 205 yards and three touchdowns against Vilonia. Sophomore quarterback Walker White has passed for close to 1,800 yards and is a major college prospect already.

The Raiders counter with their own dynamic duo. Senior Cameron Scarlett is a dual-threat QB who has Division I interest. He ran for 78 yards and a touchdown last week, and classmate running back Koby Bradley is peaking at the right time as he dominated the Trojans for 281 yards and four touchdowns.

Expect a lot of quick-strike big plays and offense in this one.

Cedaraville makes the long trip from the River Valley to the far reaches of northeast Arkansas for this game that features two great offenses.

First, Cedarville’s Darryl Kattich might be the best running back you haven’t heard of. The senior has run roughshod over opposing defenses with 1,915 yards and 19 TDs. He has caught 14 passes for 249 yards and three TDs. Kattich is also a beast on defense with 70 tackles, 2 sacks and 2 interceptions. Senior fullback Hayden Partiain, who also plays linebacker, is a nice complement at fullback, running for 1,045 yards and nine scores.

Hoxie QB Cade Forrester committed to Arkansas-Monticello and has completed 63 of 96 passes for 1,251 yards and 19 TDs with no interceptions. He has rushed for 957 yards and 11 scores. When he passes, Forrester connects with sophomore receiver Kayden Glenn, who has 25 catches for 667 yards and 10 TDs. Glenn also is the team leader in interceptions with six.