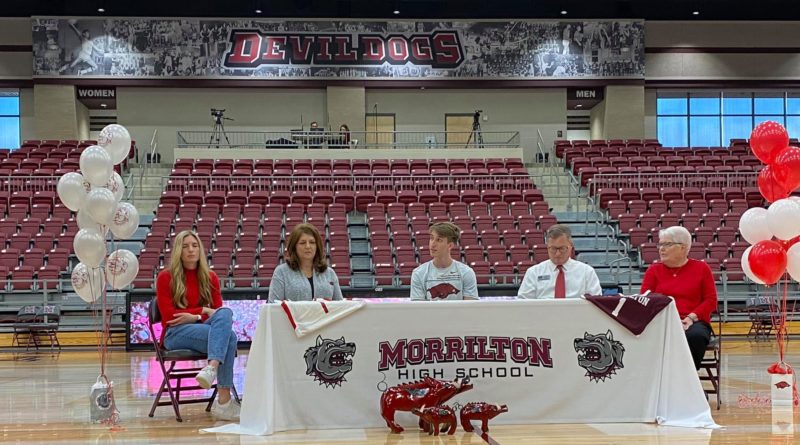 When Joseph Pinion moved from Atkins to Morrilton in seventh grade, there wasn’t reason to believe he’d stake his place in Devil Dogs lore.

“I was a skinny kid and couldn’t do a lot of the drills or move side to side,” Pinion said. “I wasn’t much to talk about. I was made to what you see now.”

What college basketball coaches saw as Pinion moved past the awkward tween years into high school was an athletic 6-foot-6 sharpshooter who would eventually lead his adopted hometown to the Class 4A state championship game. Arkansas coach Eric Musselman offered Pinion a scholarship in April of 2020, after his sophomore season. Pinion committed to the Hogs last fall after considering Baylor, Kansas and others.

Last season, he averaged 17.2 points, 6.4 rebounds, three assists, two steals and one block per game. He shot 58 percent from the field and 40 percent from three-point range.

Last Wednesday, after more than a year, he was officially able to sign his letter of intent. In doing so, he made Morrilton athletic history as the first Devil Dogs basketball player — boys or girls — to sign with Arkansas.

“It’s a real blessing, and I feel really thankful to be the first person from Morrilton to play at Arkansas,” he said. “There have been so many great athletes that have come through Morrilon, so it’s a blessing. I hope more kids from Morrilton get a chance to play there in the future.”

Pinion’s basketball exploits have made him popular in the town with a population of just over 6,600. He says he can’t go too many places without getting stopped to talk about the signing or Morrilton’s upcoming season. He smiles and acknowledges all of the well wishes and discussions.

“I feel like that is the least that I can do for what they have done for me,” he said. “I came here, a little seventh-grader, and the support, the help I’ve gotten (in Morrilton) to develop my skills means the world to me. I’m always glad to talk.”

Pinion, who is ranked a four-star recruit by some recruiting services and is in the ESPN Top 100, is in good company. Musselman has assembled a class that ranks as one of the best in the country and includes Magnolia’s Derrian Ford and North Little Rock’s Nick Smith.

With Ford and Smith as well as five-star wing Jordan Walsh and four-star wing Barry Dunning, competition will be fierce, but Pinion sees how he will fit.

“I feel if I can come in and shoot the ball like I normally do, it will be good for me,” Pinion said. “That opens up the floor for the rest of the guys.”

With his signing official, Pinon is moving on to his next mission — winning a state championship for the Devil Dogs. After falling in last year’s Class 4A state final, Morrilton is hoping to win a boys state title for the first time since 1991.

“I just never want to feel that feeling again,” he said of the disappointment following the loss to Mills in the title game in Hot Springs.

While Pinion had a standout junior season, he was forced to wear a brace after suffering a knee injury. He said the brace limited him throughout the season. As he has recovered, he has graduated to a knee sleeve that “feels more natural” and he expects to play even better without the feeling of being encumbered.

“I had been fighting the brace all year, and it didn’t let me move like I need to,” he said. “I fought back from it and prayed about it to get as comfortable as I could in it.”

It’s a good bet that with just 140 miles separating Morrilton and the Arkansas campus, many familiar faces will be cheering on Pinion at Bud Walton Arena over the next four seasons. Pinion said he knows the hopes of many in the town rest on his shoulders.