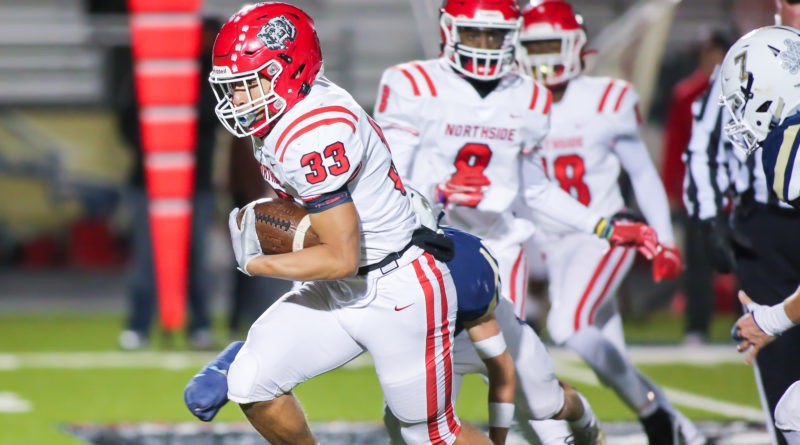 CENTERTON — After losing three of their final four 7A-Central Conference games down the stretch, it appeared that Fort Smith Northside would be limping into the state playoffs. But having to hit the road for an opening-round battle with 7A-West foe Bentonville West on Friday night, the Grizzlies did anything but limp.

Northside ran for 407 yards with its dynamic senior tailback platoon of Sundquist Church and Ty Massey, trampling the host Wolverines, 47-21.

“Our two backs are pretty good,” Grizzlies coach Mike Falleur said with a grin. “They are both hard-nosed kids, that come to work every single day. That’s what I love about them. But you have to give credit to those guys we’ve got up front, those offensive linemen. They have really done a great job of controlling the line of scrimmage.”

“We haven’t play very well since we lost to Conway a month ago, but I’m really proud of our guys for the way they came out, in the cold, and got after it,” Falleur said. “We were able to move the ball, offensively, all night, then took advantage of some turnovers. We do need to do a better job of tackling, which we will work on this week. But really proud of the way these guys played.”

The Wolverines (6-5) didn’t do themselves any favors, turning the ball over on four consecutive drives in the first half, and finding itself in a 40-7 hole at the intermission.

“It all started in practice this past week,” said Church, who rushed for 204 yards on his 21 carries. “We put it in our mind on Monday that we were going to work hard all week and come out and play hard. We’re not ready to stay home, so we are going to keep working.”

The Grizzlies ran the ball 12 of the 13 plays on the game’s opening drive, as Church capped it with a 1-yard run midway through the opening quarter.

The extra point was blocked, which enabled West to take a 7-6 lead on the ensuing drive, as quarterback Jake Casey hit Carson Morgan with a 7-yard touchdown pass.

Church and Massey continued to alternate carries, but it was a 12-yard pass from Walker Catsavis to his tight end, Julian Martinez, that got the ball in to Wolverine territory. From there, Massey scored the first of his three touchdowns on a 33-yard scamper, putting the Grizzlies back in from, 13-7.

That’s when the momentum shifted in favor of the visitors. West’s next drive came to abrupt end on the second play after a Wolverine fumble was pounced on by Northside’s Julius Thomas at the West 41. Five plays later, Massey scored again – this time from 12 yards out – to make it 20-7 with 10:13 left in the first half.

A strip-sack by Grizzlies defensive end Jacob Praphan then allowed Thomas to recover his second fumble of the game, setting up yet another Massey touchdown run.

After the third West fumble in as many drives, Catsavis connected with T’kavion King on a 30-yard scoring strike to make it 33-7. Catsavis completed 4 of 8 passes in the game for 74 yards to go with the two TDs.

“We also had to mix in a few passes to make them honor out run game,” Falleur said. “Walker did a good job of getting it to our receivers.”

Following a West interception, Mauri Smith ran a reverse for 25 yards to add another score for Northside before the break.

Church ran for 187 yards in the first half alone, while Massey racked up 134 of his 147 yards by halftime.

“The way we rotate has just become second-nature to us,” Church said of his teamwork with Massey. “We both put in the hard work and dedication, and just work well together. I really don’t like to get tackled, so when I’m running with the ball I just go as hard as I can and try to stay on my feet. I try to run hard every play. But I can’t thank my team enough, my O-line, for putting in the hard work.”

Church added another 11-yard Grizzlies touchdown on their first drive of the second half. With Northside leading by 40, Falleur pulled his starters.

West did score a pair of late touchdowns, as Dakota Gaines ran in from the 1. Less than a minute later, Braden Jones recovered a Northside fumble in the end zone for the game’s final points.

The win earns Northside a trip to face Bryant, the state’s top-ranked team next Friday.

“I’m just tickled to death with everybody on our team tonight, but now we have to look forward to a big challenge next week,” Falleur said about facing the Hornets. “We’ve played them this year, and it was a pretty competitive game. We are just going to have to go in and play our game, not make mistakes, and just see what happens.”