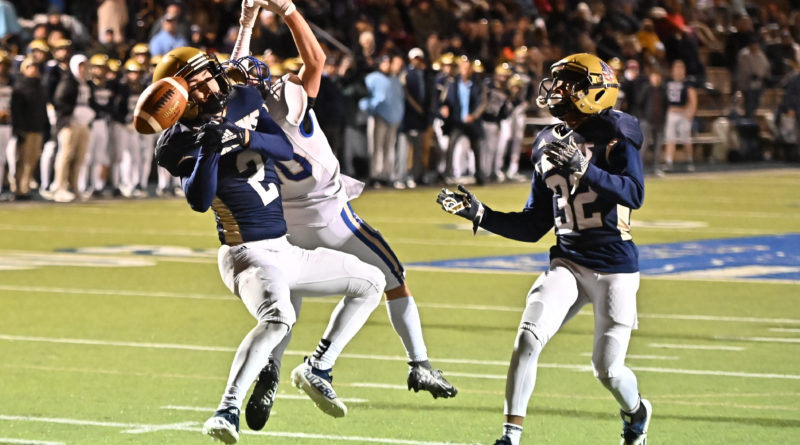 LITTLE ROCK — Patton Whicker came up with three interceptions for the Pulaski Academy Bruins (10-1) with his last two helping seal momentum in a 36-21 victory over the Harrison Goblins (7-4) in the first round of the Class 5A state playoffs at Rector Field at Joe B. Harcher Stadium on Friday night.

With the Bruins holding a 22-14 lead early in the fourth quarter, Whicker intercepted Harrison’s Logan Plumlee at the Bruins’ 34 with 11:06 left in the game.

The Bruins kept the ball for eight plays, moving to the Harrison 29 before Joe Himon was stopped for a yard loss on fourth and one with 7:15 to play.

Two plays later, Whicker came up big again, when he picked off Plumlee again and ran it back 29 yards to the Harrison 11 with 6:32 left in the game.

Three plays later, Charlie Fiser, who ran for 42 yards on nine carries, scored from eight yards out with 5:11 to play. Vaughn Seelicke’s kick was good, putting the Bruins up 29-14.

“I was so proud of Whicker tonight,” said Pulaski Academy Coach Anthony Lucas. “He had been so close, and I told him he was going to get an interception tonight and he got three.”

Three plays later, Ben Smiley sealed the game with a 55-yard interception return with 4:29 left. Seelicke’s kick was good and the Bruins had a 29-14 lead before Plumlee completed a 59-yard pass to Dylan Block to set the final margin with 2:11 to go.

“Smiley got his first and it was a pick six and that was great to see,” said Lucas.

The defense was the reason the Bruins advanced to meet Magnolia in the second round.

The Bruins had four interceptions, stopped the Goblins three times inside their 30, held them to minus-12 yard rushing thanks to two bad snaps that resulted in a loss of 41 yards.

“Our defense played well,” Lucas said. “They weren’t perfect, but I’m proud of how they played. I know they say defense wins championships, and I can see why tonight.”

Plumlee led Harrison by completing 27-of-39 passes for 299 yards, but was intercepted four times. Block caught 7 passes for 116 yards and 1 touchdown and Sloan Barrett caught seven for 98.

The defense had to play well on a night in which Pulaski Academy’s offense was uncharacteristically off. Despite finishing with 23 first downs and 350 yards in total offense, the Bruins had three turnovers (two interceptions and one fumble) and were turned the ball over on downs four times in the second half.

“Offensively, we were not where we needed to be tonight,” said Lucas. “I know we get used to putting up big numbers and winning under the mercy rule, but we had all those turnovers that stopped us.”

Fiser completed 23-of-30 passes for 201 yards and 2 touchdowns and was intercepted once. John Mark Charette led the Bruins with 11 catches for 110 yards and 1 touchdown. Himon rushed 20 times for 92 yards.

Harrison Coach Joel Wells said, “We had to keep things simple and not let them operate at the pace they like to. We had to make them work for things.”

The Bruins led 22-6 at halftime in a game highlighted by missed opportunities for both teams.

The Bruins had 3 turnovers, including two lost fumbles by Himon and Jaylin McKinney. Harrison was stopped on downs at the Pulaski Academy 21 and had a snap sail over punter Plumlee’s head resulting in a safety.

The Bruins needed six plays to get into the end zone on its first drive of the game when Himon scored from one yard out at the 10:48 mark. Himon was stopped on the two-point conversion leaving the score at 6-0 Pulaski Academy.

On Harrison’s first possession of the game, the Goblins lined up to punt, but the snap sailed over Plumlee’s head, who downed the ball in the end zone for a safety.

The Bruins answered with a 10-play, 62-yard drive in which they overcame consecutive holding penalties. McKinney, on a reverse, picked up 29 yards. After Fiser was dropped for a loss on second and one, an offsides penalty on Harrison gave the Bruins a first down and Fiser threw over the middle to Charette for a 15-yard touchdown at the 3:59 mark. Himon ran in the conversion to make it 16-0.

Harrison kept the ball for nine plays, marching from its 37 to the Bruins’ 21 before consecutive passes by Plumlee fell incomplete, ending the drive with 26 seconds left in the first quarter.

After Himon fumbled and Plumlee was intercepted by Whicker, the Bruins needed seven plays to get into the end zone when Fiser threw 8 yards to Charlie Barker on fourth down. Himon was stopped on the conversion, leaving it at 22-0 with 9:38 left in the second quarter.

The Goblins finally got on the scoreboard when Beck Jones ran in from four yards out on fourth down to cap off a 13-play, 51-yard drive at the 4:03 mark. The two-point conversion was no good, leaving the Bruins up 22-6.

The Bruins got inside Goblins’ 10 before McKinney fumbled at the Goblins 2 at the 2:07 mark.

After forcing a Harrison punt, the Bruins got down to the Harrison 12 before Fiser’s pass was intercepted by Kaden Quant with 11 seconds left in the half.

“That was aggravating because we had a drive going and fumbled and then we held them and had another drive going before we threw an interception,” said Lucas.

Harrison started the second half with a 10-play, 54-yard drive that ended with Plumlee throwing 12 yards over the middle to Barrett at the 7:35 mark. The duo connected for the two-point conversion to make it 22-14.

Pulaski Academy answered with a seven-play drive that ended at the Harrison 32 when Himon was stopped a yard short on fourth and two.

Harrison then marched to the Pulaski Academy 26 in six plays before Brodey Gilliam was stopped for no gain on fourth and one by Mason Schueck and Whicker.

The Bruins held the ball for seven plays marching to its 44 before Fiser’s pass to the Himon fell short.

“We didn’t have to be perfect, but had had 4-5 mistakes that cost us,” said Wells. “We had ample opportunities, but we had the turnovers.”