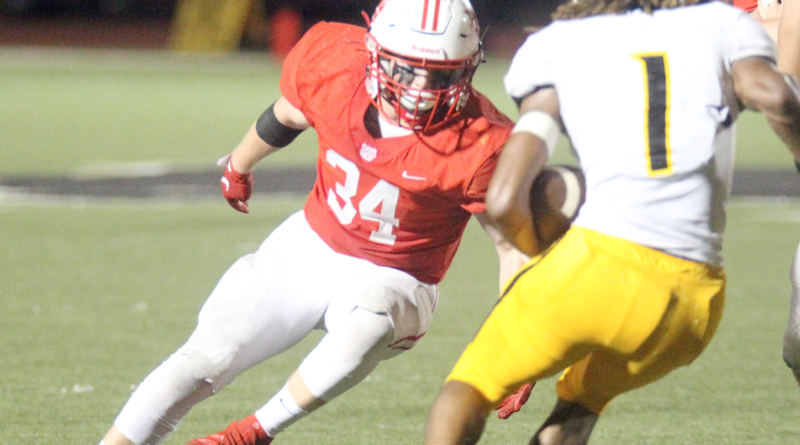 Ten weeks down and a new season is upon us as the playoffs begin this week. Over the course of this week, we will be releasing five contenders for each class along with a sleeper. Here is the list for Class 3A:

After winning it all in 2018, the Bearcats have their most complete team since — arguably even better, particularly on defense. They have outscored in-state opponents 409-94 with their only defeat coming at the hands of Texas 2A powerhouse Timpson. Booneville won its first conference game by way of forfeit, then stormed through the 3A-4 region to win the school’s fifth straight conference title.

It seems for years a ‘Ray’ has been in the spotlight, and we get a double dose this year with brothers Randon and Rylen, who have paced the flexbone attack by combining for 1,870 yards and 34 touchdowns. Randon is averaging 10 yards per carry compared with Rylen’s eight.

The Bearcats have a favorable draw, beginning with Salem, and will host up until the semifinals in a playoff bracket across the board that expects to produce plenty of action each round.

Charleston is one of four unbeaten teams in Class 3A as the winner of the 1-3A, a conference that boasts three eight-win teams. The Tigers start the postseason with a bye but will be challenged in the second round by Osceola or Centerpoint, most likely followed by a date with defending champion Harding Academy in the quarterfinals.

Junior quarterback Brandon Scott has put up 2,201 yards of offense and 24 touchdowns with classmate Brevyn Ketter as a reliable backfield mate leading the team in rushing (708 yards, 11 TD). Ketter ranks first on the team in receiving, hauling in 27 passes for 472 yards to go with five scores. The Tigers defense also has had plenty of shining moments, posting two shutouts and four games allowing 20 points or fewer.

The back-to-back state champions are on a mission to 3-peat but will have to do it without the dynamic duo of Caden Sipe and Ty Dugger, both of whom put on a show in last year’s title game. Arkansas baseball commit Kade Smith took over under center for the departed Sipe and has completed 70% of his passes for 2,087 yards to go with 25 total touchdowns. Andrew Miller, one of the top stars from last season, has been stellar, averaging 9.2 yards every time he touches the ball, and he has found the end zone 25 times. Jackson Fox leads the receiving corps in all categories with 734 yards on 44 receptions and seven scores.

Other than losses to Class 5A’s Valley View and Memphis-area powerhouse Briarcrest Christian, the Wildcats have hardly been challenged with a defense that has not allowed more than 18 points per victory. With the depth of Class 3A being what it is, they will not have an easy path but certainly have to be one of the favorites.

Marcus Haddock’s squad is on a revenge tour of sorts after giving up 71 points to Harding Academy in the state title game a year ago. The 10-0 Owls have been dominant, outscoring opponents 433-103, only being pushed by Class 4A’s Crossett in Week 3, winning 15-13. It would be a safe bet to say the Owls should have no problem advancing to the quarterfinals where they will likely meet Hoxie in what would be a rematch of last year’s muddy semifinal game in which McGehee prevailed 18-12.

The Owls are powered by skilled two-way players Jody Easter and A.J. Jordan, both heavy contributors on last year’s squad. They hold down the back end of the defense and are as reliable as you could ask on the offensive side.

After winning back-to-back conference titles, McGehee is fully expecting to play in its second state final in as many years and third since 1999.

Few, if any, teams in Arkansas can match the speed of Prescott. After semifinal round exits in 2018 and 2019, then a five-point loss to runner-up McGehee last season in the quarterfinals, the Curly Wolves are hoping to cross the finish line in 2021. Other than squeezing by Centerpoint 50-41, no opponent has come within 26 points of them. They welcomed back six starters on the defensive side and hardly have a weak link, allowing just 15 points per game.

Jaylen Hopson, who possesses multiple Division I offers, is one of the most electrifying players in the state regardless of class and has averaged 166 yards rushing per game while scoring 26 total touchdowns. Junior quarterback Carston Poole completes more than 70% of his passes, throwing to favorite targets Jacaylon Zachary (4.5 speed) and Omarion Dickens (28 YPC), who both have more than 500 yards receiving. H-back Caleb Harris is another solid weapon who has offers from Ole Miss, among other Division I schools.

With 3A being the deepest class in the state, there are many options here — Cedarville, Paris and Hoxie, just to name a few. I give the edge to Centerpoint mainly because of the experience, plus they showed they can play with Prescott, not only competing with them, but leading the Curly Wolves 35-12 with 3:29 left in the third quarter before falling 50-41. That started a three-game losing streak, but the Knights were able to close the regular season strong with wins over Genoa Central and Bismarck.

Quarterback Josh Lawson, a three-year starter, has multiple weapons, including quick receivers C.J. Fox and Kaden Owens, to go with a reliable offensive line led by all-state left tackle Garrett Alexander. The question for the Knights is can they finish games, especially being dealt a tough draw? If so, it would not be shocking to see them make a deep run after a trip to the quarterfinals last season.