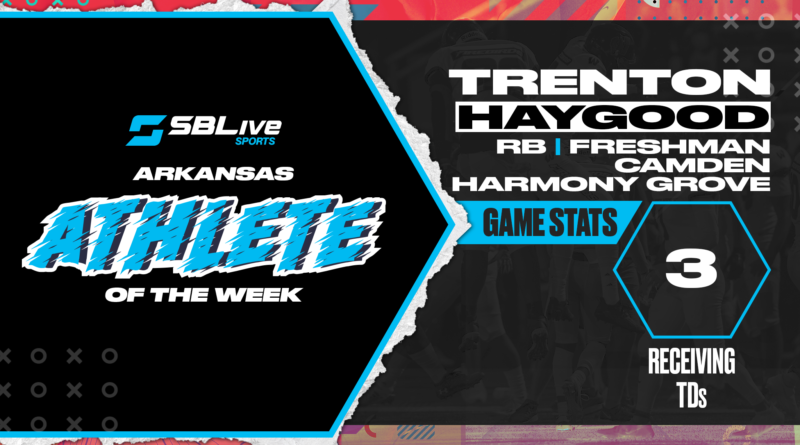 Congratulations to Camden Harmony Grove running back Trenton Haygood for being voted SBLive’s Arkansas High School Athlete of the Week for Oct. 25-31!

The freshman caught 3 touchdown passes in the Hornets’ 41-30 win over Rison.

Haygood received 29.34% of the vote, beating out Lincoln’s Kale Jones who finished second with 23.63%. Benton’s Lacy Bohannon finished third with 13.43% and Malvern’s Braylon Watson finished fourth with 7.71%. There were over 91,000 votes tallied this week!

Westphal won the Class 5A West Championship in Vilonia in 15:43.70.

Pielemeier won the Class 5A South Championship in Hot Springs in 18:28.00.

Wasemiller won the Class 6A Division of the Mountie Classic Conference Championship in Rogers in 18:58.40.

Betts won the Class 6A Division of the Mountie Classic Conference Championship in Rogers in 16:01.80.

Patterson won the Class 5A West Championship in Vilonia in 19:11.40.

Verdin won the Class 5A Central Championship at War Memorial Golf Course in Little Rock in 16:27.90.

Phelan was named MVP of the Class 6A state tournament with 42 assists, 2 assists and 14 digs in a 3-0 victory over Springdale Har-Ber in the state finals.

Benford had nine kills for the Lady Wildcats.

Garrett had 10 assists and 7 digs.

Supine led the Blazers to their seventh consecutive state championship with a 3-0 victory over Brookland. She finished with 10 kills, hit .400, and had 3 blocks.

Kom was named MVP of the Class 3A state tournament after contributing 7 kills in a 3-0 victory over Hackett in the state finals.

Robinson had a match-high 6 blocks and 5 kills.

Mendenhall had 7 kills and 18 digs.

Allison led the Lady Tigers to a 3-0 victory over Life Way Christian. Head Coach Kaylie Pyles said she “does everything for us” and based on her performance, Pyles is right. Allison had 4 aces, 8 kills, 1 block, 15 assists and 11 digs.

The senior threw for 271 yards and 5 TDs in the Bulldogs’ 42-14 rout over Rogers Heritage.

Farmer rushed for 177 yards and 3 touchdowns and threw for 97 yards and 1 touchdown in a 33-21 victory over Batesville.

The senior caught 9 passes for 143 yards including a 55-yard TD, in the Bulldogs’ 42-14 rout over Rogers Heritage.

The senior caught 2 TD passes and returned a punt for a 53-yard touchdown in the Bulldogs’ 42-14 rout over Rogers Heritage.

The senior threw for 170 yards and a touchdown, and added an 18-yard rushing TD in the Hornets 24-12 victory over North Little Rock.

The sophomore caught five passes for 72 yards, including an 18-yarder that set up the final touchdown, in the Hornets 24-12 victory over North Little Rock.

The junior caught five passes for 88 yards and 2 touchdowns in the Lumberjacks’ 42-17 win over Hamburg.

The senior returned the opening kickoff for an 85-yard touchdown, then added a 16-yard TD reception, in the Cardinals’ 31-28 win over Hot Springs.

The senior tallied 11 tackles and several QB pressures that led to two interceptions in the Lions’ 20-7 win over Gurdon.

The junior rushed 19 times for 103 yards and 2 TDs, while also catching a touchdown pass, in the Bulldogs’ 42-0 win over Van Buren.

The senior rushed for 165 yards and a touchdown in the Wolves’ 42-41 loss to Benton.

The senior racked up 18 tackles in the Panthers’ 21-8 loss to Joe T. Robinson.

The senior racked up 160 yards and 2 touchdowns in the first half in the Badgers’ 49-22 win over Bauxite.

The senior tallied 141 yards of total offense and 2 touchdowns in the first half in the Badgers’ 49-22 win over Bauxite.

The sophomore completed 20 of 28 passes for 185 yards with a touchdown and a 2-point conversion, and also ran in another score, in the  Wampus Cats’ 35-7 win over Little Rock Catholic.

The junior threw for 2 touchdowns in the Sand Lizards’ 27-7 win over Waldron.

The senior picked off 2 passes and scored a pair of touchdowns in the Sand Lizards’ 27-7 win over Waldron.

The sophomore threw for 5 touchdowns in the Hornets’ 41-30 win over Rison.

The senior had three catches for 131 yards and 2 TDs in the Tigers’ 49-7 win over Springdale.

Farmer rushed for 177 yards and 3 touchdowns and threw for 97 yards and 1 touchdown in a 33-21 victory over Batesville.

The senior quarterback passed for 321 yards and a touchdown in a 40-19 loss to Malvern.

The freshman running back carried the ball 25 times for 176 yards and two touchdowns, plus a two-point conversion in a 37-36 win against Lavaca. He also added a 79-yard kick return touchdown. Defensively, he tallied eight tackles and two interceptions.

The senior receiver caught nine passes for 131 yards a touchdown in the Wildcats’ 52-51 over Searcy.

The senior quarterback passed for 269 yards and two touchdowns and more than 90 yards rushing in the win.

The junior running back led the Wildcats with 115 rushing yards and four touchdowns.