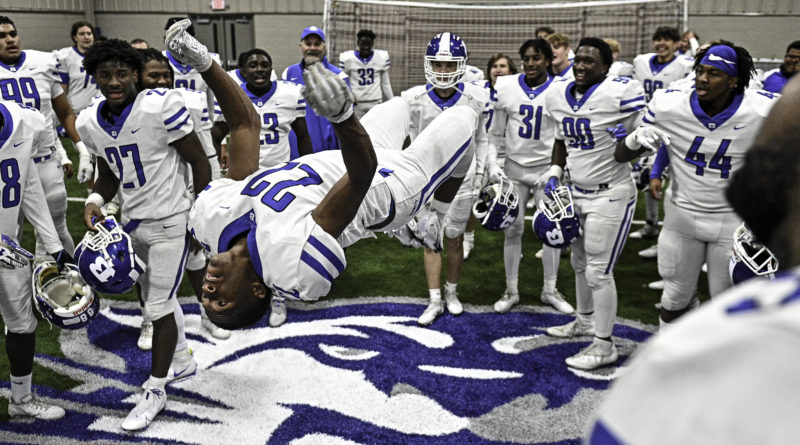 “Sometimes it’s better to be lucky than good,” said Bryant coach Buck James. “We didn’t play well. We didn’t play smart, but when we were down, we didn’t quit.”

The Hornets won on a night in which they turned the ball over four times, were penalized 11 times for 95 yards and were stopped on the goal line in fourth quarter, trailing 23-17.

“How many times were we in the red zone and didn’t score?” said James. “I bet the ratio on penalties was 15-1. We didn’t get a lot of breaks tonight, but our kids kept their heads down and kept chopping the tree down.”

Conway appeared to have Bryant on the ropes when it had first-and-10 on the Hornets 33 with less than three minutes left in regulation, holding a 29-24 lead.

However, Boogie Carr, who rushed for 152 yards on 22 carries, was stopped for a loss of two on first down. On second and third downs, Jaylen Chambers was stopped for no gain forcing Bryant to use its last time out with 1:26 left. Facing fourth and 12, Conway coach Keith Simple elected to go for it and Devyn Olmolo’s pass to West Boudreaux was good for nine yards, three yards short of the first down.

“We had some injury problems,” said Fimple, who did not elaborate on the players in question. “We decided to to go for it and keep the ball.”

When asked if he was surprised Conway didn’t try and punt the ball away, James said he didn’t think about it.

Singleton caught 8 passes for 138 yards in the victory.

“Carson is a winner,” James said. “I always tell him, he doesn’t have to make the big plays. He just can’t get us beat and he didn’t get us beat tonight.”

“What can you say?” Fimple said. “We knew they had no timeouts left and they were going to throw down the middle of the field. It’s a credit to them and you can see why they’ve won so many games in a row.”

The Hornets appeared to be down when they were stopped on four consecutive plays from inside the Conway 4 with 8:39 left, trailing 23-17. Chris Gannaway, who rushed for175 yards on 27 carries, carried for three yards to the 1 before being stopped for no gain one second down. Burnett tried the middle on third and fourth down and was turned away.

Conway took the momentum from that stand and used a 46-yard run by Carr along with two personal-foul penalties by Bryant to set up a 15-yard run by Manny Smith with 7:32 left. The two-point conversion was no good and Conway led 29-17.

Bryant then answered with an eight-play, 65-yard drive that ended with James Martin, who rushed for 44 yards on seven carries, scoring from two yards out with 4:42 left. Stephen Fuller’s kick made it 29-24 setting up the final heroics.

After Conway took a 7-0 lead on a 4-yard pass from Omolo to Rome Fields at the 9:43 mark of the opening quarter, Bryant kept the ball for 10 plays, driving from its 15 to the Conway 18 before Burnett was intercepted by Traland McClure at the 5:51 mark.

Conway kept the ball for four plays before being forced to punt.

This time, Bryant kept the ball for 9 pays before settling for a 33-yard field goal from Fuller with 15 second left in the first quarter after an illegal formation wiped out a first-down run on fourth and one by Burnett that would have given the Hornets the ball inside the Conway 5, making the score 7-3 Conway.

After another Conway punt, Bryant kept the ball for nine plays, but Gannaway fumbled at the goal line and Conway recovered in the end zone at the 7:26 mark.

Conway took advantage, keeping the ball for seven plays on the 80-yard drive with a Omolo throwing 14 yards to Manny Smith over the middle at the 5:16 mark. Adrian Mejia’s extra point was good and the Wampus Cats led 14-3.

Two plays later, Conway’s Preston Prock hit Burnett from behind and Ethan Winningham picked up the loose ball and returned it 40 yards for a touchdown. Mejia’s extra point was no good and Conway led 20-3 at the 4:47 mark.

Fuller’s squib kick bounced off a Conway player and he recovered at the Bryant 45 giving the Hornets at chance to get close, but two plays later, Garrett Sanders intercepted Burnett  and returned it 27 yards to the Hornet 31.

However, the drive stalled with Mejia missed a 45-yard field goal with 17 seconds left in the half.

Bryant closed to 20-17 with 3:46 left in the third quarter when Burnett scored from six yards out and threw to Jordan Knox for the two-point conversion.

Conway answered with a 13-play, 64-yard drive that ended in Mejia’ kicking a 29-yard field goal with 42 seconds left in the third quarter making it 23-17.

“Friday nights in the 7A Central come down to momentum swings and execution,” Fimple said. “My kids are resilient and all of our goals are still in front of us and we have a lot of big games left to play.”