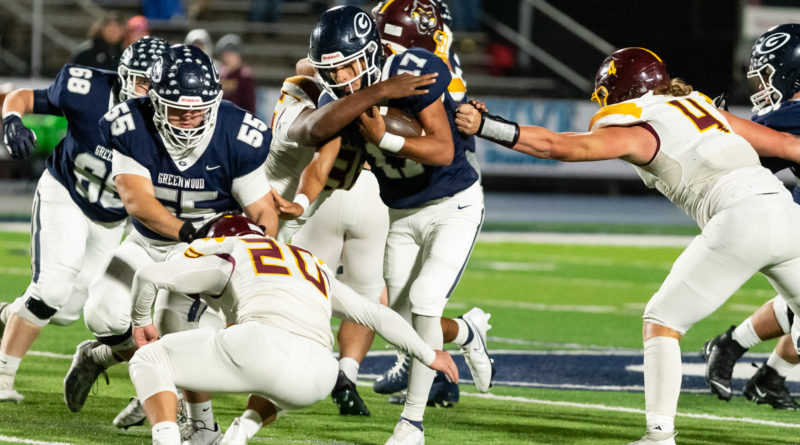 Down by 12 in the fourth quarter, the Hornets rally to pull out the miraculous victory and notch their 39th straight in-state win and their third straight 7A-Central Conference title.

The Wampus Cats had control of the game until the end of the fourth quarter and watched their eight-game winning streak disappear and the Hornets celebrating a league title on their field.

The Bulldogs win their first outright conference title since 1963 with their third straight mercy-rule win and now set course to try to land in Little Rock and play for a Class 7A state title.

The Charging Wildcats slam Cabot for the No. 3 seed in the 7A-Central and could be a very tough out in the Class 7A playoffs.

The Saints clinch an undefeated 1-4A Conference title and will play at home for the duration of their playoff run, which will most likely end in Little Rock.

The Bruins win another Class 5A-Central Conference title and are ready to defend their Class 5A state championship.

The Tigers blast their rivals and could be primed for a deep playoff run as the No. 2 seed in the 7A-West.

The Panthers make it three losses against the 7A-Central elite and will host Springdale Har-Ber with a trip to Fayetteville looming for the winner.

The Patriots spoil the Hurricane’s party as they now have to share the 6A-East Conference title after running the table for the first six games.

The Patriots finish strong and now looked tuned up for a long playoff jaunt.

The Yellowjackets picked up a forfeit win from Marion for the Patriots playing an ineligible player the first week of the season but then were upset by the Raiders on Friday night to prevent them from winning a 5A-East Conference title.

The Grizzlies will be a dangerous No. 5 seed in the playoffs and might get a rematch with Bryant, which they pushed, in the quarterfinals.

The Bulldogs were one of the surprise teams of the season and could continue that with a deep playoff run.

The Bulldogs, who have many injured players back, pulled off the surprise of the night by pummeling the Wolves, who have been one of the best teams in the state all season.

The Warriors have gotten back on track offensively as of late but will have a tough draw playing at Vilonia in the first round of the Class 5A playoffs.

The Wildcats finish on a roll and thanks to Marion own a share of the 6A-East Conference title with Jonesboro.

The Eagles will have to wait at least another year to snap their 18-year conference-title drought after losing the big Judge’s Cup game to Greenbrier.

Coach Randy Tribble’s group completes one of the great regular seasons in school history by going undefeated, winning a 5A-West title and smacking rival Vilonia for the Judge’s Cup.

The Lumberjacks pick up a forfeit win against Helena-Central and will go without a game for two weeks as they wait on a bye in the Class 4A playoffs next week.

Robinson got hot after losing in the opener to No. 6 Pulaski Academy and has been one of the top 4A teams since.

The Raiders earned a little respect statewide by exterminating ‘Delta Swarm’ and now can really elevate their reputation with a deep playoff run.

The Cardinals roll past Alma and could prove to be a tough out in the Class 5A playoffs as a No. 3 seed.

The Ricebirds’ only loss in the regular season was to No. 21 Warren.