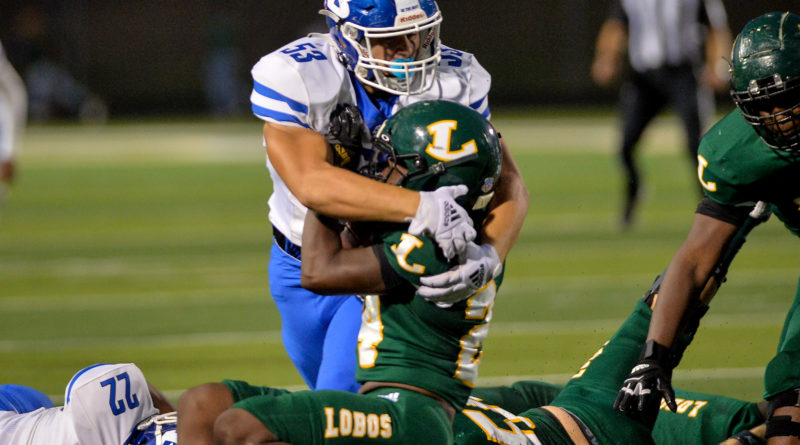 Over the next few weeks, we’ll be taking a position-by-position look at some of the top players in Arkansas high school football. This list focuses on the defensive linemen.

There are hundreds of standout football players in Arkansas, and these lists are not intended to be comprehensive. Use the comments section to discuss the other defensive linemen worthy of fans’ attention in 2021.

The Arkansas commit is ranked as the No. 5 player in the state and the No. 67 defensive tackle nationally. He garnered 14 college offers, before choosing to play at Arkansas. As a junior, he played multiple D-line spots and got snaps as a wildcat QB in short yardage. “With his athletic size and ability he could see [action] in a lot of different spots,” said Maumelle coach Kirk Horton. “He does whatever it takes.”

The Arkansas commit is ranked as the No. 10 best player in the state, and the No. 117 defensive tackle nationally. Averaging 6.8 tackles a game, with 2 sacks and 5 tackles for a loss. “JJ plays hard and is a fundamentally-sound defensive player who gets after the quarterback and chases down plays,” said Greenland defensive line coach, and former Razorback All-American, Jermaine Petty.

Eastman is averaging 5 tackles a game, with 3 sacks totaling minus-20 yards, and 10 tackles for a loss. “I just love his motor – he’s a motor guy,” Cardinal coach Jake Monden said. “He’s a high-energy kid that is always at the point of attack. He’s a guy you’ve got to account for on every snap because he plays so hard.”

Barker is averaging 5.3 tackles per game, with 9 sacks for minus-79 yards, and 14 tackles for a loss. “He’s just a great kid,” Cardinal coach Jake Monden said. “Definitely one of the biggest leaders on our team – he really leads that front group. He’s got some great football ahead of him.”

Brownlee is averaging 7.6 tackles per game, with 5 sacks and 11 tackles for a loss.

Siddons is averaging 7 tackles a game with 42 total, with 9 sacks and 10 tackles for a loss, and 5 QB Hurries. “He is a kid who has great athleticism for his size,” said coach Josh Watson. “His best attribute is his physicality. Whether it’s at tight end or defensive end, he is just bringing it.”

Wells currently has a Division II offer from UA-Monticello and an NAIA offer from Arkansas Baptist. As a junior last season, he had 37 tackles, 5 for a loss and four sacks, while forcing and recovering one fumble.

Colquiett currently  has 57 tackles, 26 tackles for loss, 5 sacks, 21 QB hurries, and a forced fumble “Titus is an outstanding football player,” said Warriors coach Eric Cohu. “Certainly,  he is one of the best defensive linemen in the state. He was All-State his junior year and is currently having a great senior year. Dealing with the death of his father just a couple of weeks ago has definitely placed a lot of emotional trauma on Titus. He continues to play hard for his father each week knowing that he was his biggest fan.”

Jenkins averages 5.2 tackles per game with 5 sacks and 6 tackles for a loss.

The team’s Week 3 Defensive Player of the Week has 49 tackles, 11 tackles for a loss and 6 sacks. “Caleb is a hard working, honorable young man who has a promising future ahead of him,” Mills coach Cotez Lee said. “Caleb’s size, physical nature and coachable disposition are his strongest features. He will be a force to be reckoned with for the next two seasons as he is becoming a standout at both defensive end and defensive tackle.”

The team’s Week 5 Defensive Player of the Week has 44 tackles, 13 tackles for a loss, 4 sacks and a forced fumble. “He is a hard-nosed fighter for us, boxes in his free time and has future aspirations to pursue that career just as much as football,” Comets Coach Cortez Lee said.  “He also competes in track and field where he has become a top 300-Meter Hurdler of the conference. He is a highly respectful young man that leads by example. This is his first season on the Mills football team but he has made immediate contributions from the defensive end position.

Brooks is averaging 9 tackles a game, with 2.5 sacks and 9 tackles for a loss.

Traylor is averaging 5 tackles a game with 7 sacks and 14 tackles for a loss. After a victory over Van Buren earlier this season, Van Buren coach Crosby Tuck said, “He caused us more problems than anything that happened out here. Unbelievable football game out of him and we struggled to come up with an answer for him.”

Crawford is averaging 6.5 tackles per game with 5 sacks and 7 tackles for a loss. “He’s long, plus he’s super smart. He has a 4.0. (GPA),” Valley View coach Sean Cockrell said. “I think he’s still growing. He’s almost 6-foot-5. His dad is 6-6, so I think he’ll always have his hand on the ground. He is playing a little bit of wide receiver/tight end for us, too. He moves well and he runs good routes and can catch. That may be another possibility for him as well.”

Love is averaging 4.2 tackles a game with 7 sacks and 14 tackles for a loss.

Averaging 4.8 tackles a game with 3 sacks and 12 tackles for a loss.

Mercer is averaging 5.7 tackles a game with 11 tackles for a loss. “He is very athletic …. He has contributed in a major way the whole time,” coach Neil Evans said.

An all-conference performer last year, helping lead the Hornets to the state championship. He has been a main cog on the Bryant defensive line. “He has played well and I think he is one of the best in our league,” Coach Buck James said.

A Division I recruit, he was names all-state as a junior, after racking up 68 tackles and 8 sacks. He continues to be a force on the Charging Wildcats defensive line.

The three-year starter is averaging 8.2 tackles per game with a sack and 2 tackles for a loss. He starts at defensive end and tight end. The only time he comes off the field is on special teams. “He is our best blocker on the O-Line and has always been at the top of our tackling chart each year,” Coach Michael Sloas said. “This year he has also played outside linebacker for us in some of our defensive schemes and excelled at that as well. He has even caught a TD pass in week one from his tight end position. But not only does he excel in athletics but in the classroom as well. He is loaded down with AP classes and maintains a high GPA along with very good ACT scores.”