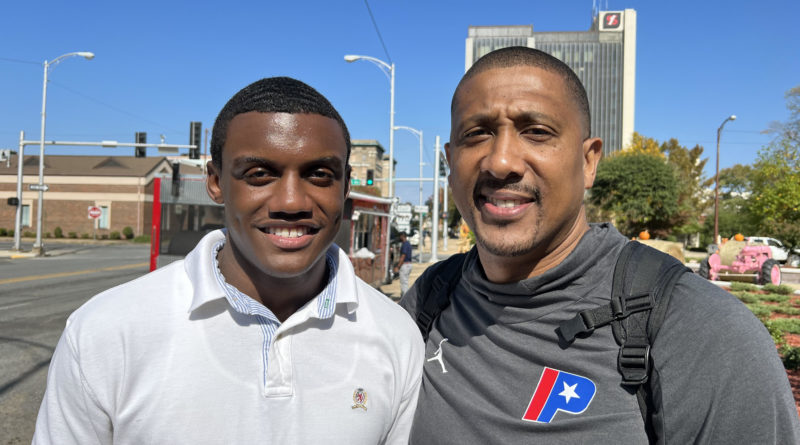 By Nate Olson | Photo by the Peacock Group

The King Cotton debuted in 1982 and enjoyed a 17-year run and featured many future college and NBA stars.

The stories I heard from old-timers revolved around memories of the Classic, including Russellville’s Corliss Williamson, who later starred at Arkansas and played in the NBA, going toe-to-toe with future NBA star Jason Kidd on ESPN, and the legend of Shabazz, who was arguably the state’s greatest prep athlete playing four sports and wowing all with a five-touchdown game against Texarkana in the Class AAAAA football state championship game in 1990.

There was no way I could ever turn back time to see Shabazz, even though I have been one of the few Arkansas journalists who has profiled him in recent years after he sought seclusion in Texas and lived a quiet but happy life. But with the rebirth of the Classic, I could witness that awesomeness, and it was indeed wonderful walking into the Pine Bluff Convention Center three years ago and watching high-level basketball games, where I covered so many state championship contests for the PBC.

My warm feeling goes way further than basketball, though. Unlike many in this state, I love Pine Bluff. Working in the city for five years, I found some of the best people I’ve encountered in 20 years of covering sports. People there love sports and support the athletes. Forget the headlines and the crime statistics, the warmth of the folks there is overwhelming. I appreciated it during my tenure at the newspaper and the time I spent working in corporate communications at Simmons Bank, which is headquartered in Pine Bluff and is a sponsor of the King Cotton Classic.

However, Simmons has done much more than that. During my stint at the bank, they began the GoForward Pine Bluff intuitive, which was a full-court press plan to revitalize the city in several different aspects, with the help of many community leaders. In a few years, major projects have been completed, blight has been cleaned up and the economy is seeing life breathed into it with new industry, with much more work and plans on the horizon.

And attractions and entertainment events, such as the King Cotton Classic, have begun or returned. The third installment of King Cotton 2.0 runs Dec. 27-29 at the Pine Bluff Convention Center. After my first experience, I wrote a column critiquing the event. Tournament director Samuel Glover might have listened, or we might be of like minds. Either is possible, but the fact that this year’s field features so many in-state high schools with high-profile players is magnificent.

That was one of my suggestions to add a major boost to attendance. After taking last year off due to COVID-19, Glover announced a star-studded field which includes in-state powers North Little Rock, Little Rock Parkview and Magnolia as well as local teams Pine Bluff, Watson Chapel and White Hall.

That means Arkansas commits Derrian Ford of Magnolia and Nick Smith of North Little Rock could play each other. Just those players along with Ke’el Ware, the Oregon commit at North Little Rock, with some of the other in-state players would be worth the price of admission. But Glover, a Pine Bluff native and former University of Arkansas track athlete, didn’t stop there.

The field of 16 includes some of the top teams from Texas, Tennessee, Missouri, Louisiana and beyond. Beaumont (Texas) United is ranked No. 23 in the SBLive National High School Boys Top 25 Rankings and joins North Little Rock, which is No. 10, on the the list. Beaumont was 31-0 last season and won the Class 5A Texas state championship.

Cane Ridge High School of Antioch, Tenn., finished as the runner-up in Class 3A last season and features five-star standout Brandon Miller, who is the No. 1-ranked player in the state.

There’s more, and for the first time since the early 1990s, a women’s field, which includes Watson Chapel and Sylvan Hills.

I expect this will be the best-attended tournament yet of the re-boot era, and I am happy for all involved. It’s events like this that show visitors what Glover and Markris and I already know — Pine Bluff is a great place full of wonderful people, and the best is yet to come.

For more information on the field and to buy tickets starting Nov. 15, go to KingCottonClassic.org.