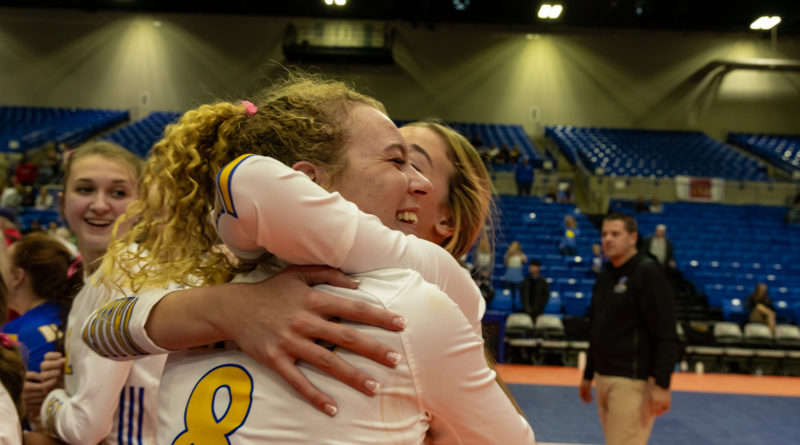 “I knew after winning the first two games that the third one was going to be a hard one because their backs were to the wall, and they weren’t going to give up. I think we had some jitters because we were up 2-0.

“This makes it too emotional knowing you got every bit out of everyone today.”

Trailing 14-7 in the third set, the Blazers went on a 10-3 run to tie it at 17-17 with Alexandra Gibson getting 2 kills, state tournament MVP Natalie Supine getting 2 of her 10 kills and Hadeden Lieblong also getting 2 kills.

“That third set, our backs were to the wall and I told them what we needed to do,” said Brookland Coach Nancy Rodriguez. “We came out a little tight in the first two sets and didn’t attack very well.

“Valley View showed what makes them so special. They are so well prepared.”

Supine, who had 10 kills, 3 blocks and hit .400 to win MVP honors, said. “I wouldn’t trade this for anything. This was special knowing we had to dig deep and had to put it all together with hard work. Winning doesn’t get old.”

“I wore a T-shirt that said, ‘family’ and I keep stressing that because we work so hard together, and we have great support from all of our fans and family members because we’re all in this together.”

Despite the loss, Rodriguez was pleased with the way her team advanced to the finals.

“For them to do what they did, this was a great year. We had three seniors, two juniors and one freshman. I’m super excited about our future especially when you see how we banded together and worked hard,” she said.