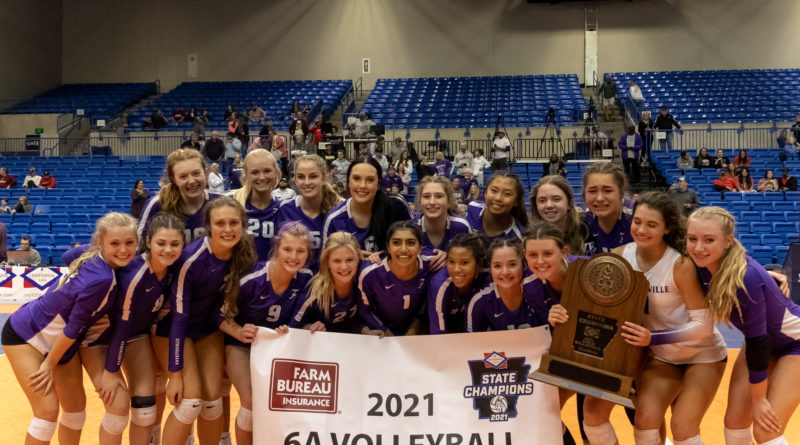 HOT SPRINGS — Springdale Har-Ber defeated Fayetteville twice during the regular season in a pair of matches that went five sets. On Saturday, in the Class 6A state championship match at Bank OZK Arena, Fayetteville (32-4) turned the tables on the Lady Wildcats (33-2) in a 25-17, 25-14, 28-26 victory, repeating as state champions.

“I feel like my kids came in here with a lot of energy,” said Fayetteville coach Jessica Phelan. “They came in here really confident and ready. I know in the locker room, it was like herding a bunch of cats because they had no fear. I was so proud of of them.”

Har-Ber coach Cassie Loyd, whose team was making its first appearance in the state final, felt her team didn’t look sharp until it was too late.

“I’m not sure,” Loyd said. “We had some good practices before and I thought our team was ready, but we came out playing not to lose and Fayetteville is rich in tradition and with Coach Phelan leading the way, they were going to be ready. It seemed like the experience factor showed.”

Fayetteville was led by state tournament MVP Kennedy Phelan, who had 42 assists and 14 digs. Brooke Rockwell had a match-high 15 kills and Madeline La Fata had 12 kills. Reagan Harp had 7 kills and Ashley Ruff had 15 digs.

“Kennedy has dreamed of coming here and winning a state championship,” said Jessica Phelan of her daughter, who has committed to playing at Florida State. “This is a big trophy for her.”

Kennedy Phelan said, “This is incredible because this is a great group of players I’ve played with for so long. This has been a dream season and today we made as few mistakes as possible.”

Har-Ber was led by Caylan Koons, who had 27 assists and 15 digs. Jordan Benford had nine kills. Katerine Cooper had 8 kills. Josie McCroskey had 13 digs.

Fayetteville controlled the first two sets, trailing 3-1 in the second set before going on a 6-1 run to seize control.

Trailing 20-18, Ella Weilert’s serve was long, bringing Har-Ber to 20-19. After a kill by Brooke Rockwell put Fayetteville up 21-19, Koons responded with a kill to make it 21-20. After Lily Sharp’s serve went out of bounds, giving Fayetteville a 22-20 lead, Kyla Clubb’s kill bounced off two Fayetteville players to close it to 22-21 before Benford’s kill tied it at 22-22.

Galatia Andrew’s serve went long, giving Fayetteville a 23-22 lead before La Fata’s attack went into the net to tie it at 23-23.

La Fata’s next attack went wide, putting Har-Ber up 24-23 and one point away from forcing a fourth set, but Regan Harp’s kill tied it at 24-24, forcing the winning team to have to score 26 points.

Quincy Schaffer’s ace got put the Lady Bulldogs up 25-24, one point away from the title before Kinleigh Hall’s kill tied it at 25-25. Benford was wide on her next attack putting Har-Ber down 26-25 before Hall’s next kill tied it at 26-26.

“We started playing Har-Ber volleyball in the third set after playing very timid in the first two. In the third set, we realized it was go time and played as a unit,” said Loyd.