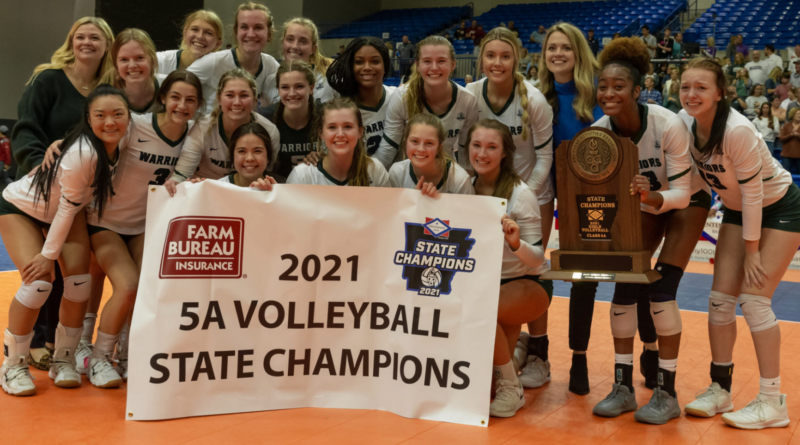 “That was stressful,” said Little Rock Christian coach Lacey Rowan. “My team knew it was going to be in a battle and was focused one point at a time.”

State championship MVP Harper Stokes said, “I had faith in my teammates the whole time. I knew would can make plays under pressure. We have a strong mental team and that is one of the best qualities we have.”

In the fourth game, where neither team led by more than two points, the Lady Warriors trailed 22-20 before Romani Thurman came up with a kill to make it 22-21. Jenna Molleston followed with an ace to tie the game at 22-22.

Benton quickly regained the lead when Kenzie Garrett’s side tip over the net put the score at 23-22, but moments later, Stokes and Thurman teamed up for a block to tie the game at 23-23.

Laci Bohannan’s attack was wide and Strokes came up with another block to give the Lady Warriors’ the fourth-set victory.

Thanks to two kills by Bohanann, Benton opened the fifth set with a 4-0 lead and would lead 7-3 before Little Rock Christan came back to tie it a 7-7 thanks to a kill by Thurman, a double hit by a Benton player, an attack by Henley Hooks that went out of bounds and one by Irelyn Flyyn that also sailed wide. Little Rock Christian would gain its first lead at 9-8 on a block by Stokes, pushed it to 11-8 when Bohannan’s attack went into the net, a kill by Isabella Elley.

Benton would close to 12-11 on kills by Flynn, Abigail Lagemann and Olivia McCallister before Hallie Martin had a kill, Benton’s Presley Pallette was blocked and an ace by Stokes to seal it.

“We rely a lot on our middle hitters to open things up for the outside,” said Rowan. “We have some amazing hitters.”

Benton Coach Michelle Shoppach said “We couldn’t hold the lead, They’d come back and do something great, but that’s volleyball at its highest level which is what we played today and unfortunately we couldn’t finish.

“Things didn’t go smoothly for us as they did earlier in the week, but our outside hitters kept swinging and if we had got a couple balls to fall, then things might have been different.

“I’m extremely pleased with the way we represented Benton. I never saw any give up in us.”