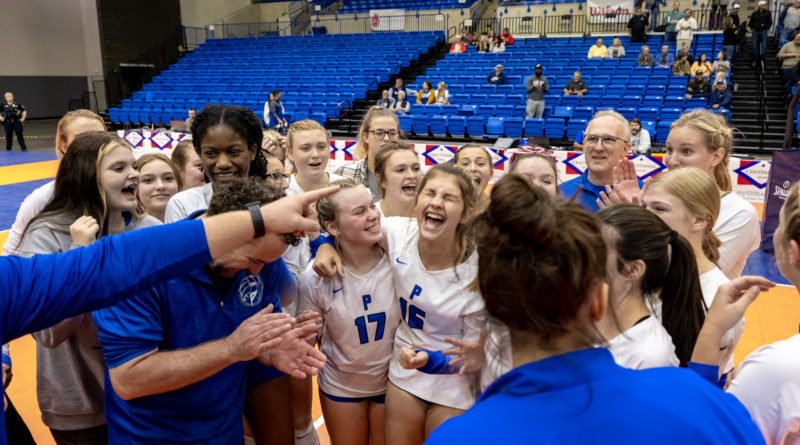 HOT SPRINGS — The Class 3A state volleyball championship proved to be a happy return from maternity leave for Paris volleyball coach Jordan Devine and a happy birthday for Alyssa Komp.

Devine, who missed the district tournament after giving birth to twins, returned to see her team win its first state title since 2018 and its fifth overall with a 25-23, 25-15, 25-21 state championship over defending champion Hackett on Saturday at Bank OZK Arena.

The title was a happy one for state tournament MVP Alyssa Komp, who was serenaded by the fans to “Happy Birthday.”

“I think the girls played great,” said Devine. “We beat [Hackett] in the district tournament, and we got it into our heads that we could do this.”

Devine missed that win but the happy mom was glad to be back to see the second win over Hackett in Hot Springs Saturday.

Komp finished with seven kills to earn most valuable player honors while Jacee Hart had 7 kills,3 aces and 15 digs.

“I’m really happy with this,” said Komp holding the MVP with the Birthday singing lingering in the background.

“This was a big win, and when we beat them in the district tournament, we knew we could do it. We hadn’t won a state title since my freshman year.”

The Lady Eagles won a close first game before taking control in the second game jumping out to a 7-2 lead before Hackett closed to 16-14 before going on an 8-0 run to put the second game away behind the serving of Jacee Hart.

While she was serving, Karsen Hart and Kasse Appleton had kills while Jacee Hart had an ace and Komp had a kill. After Hackett’s Madeline Freeman had a kill to close it to 24-15, a deflection made it 25-15.

“We played well all week and we came out with a lot of nerves,” Hackett coach Bridgett Freeman said.  “I would call time out and settle them down, and they would get rattled again. The kids tried, but we didn’t play as well as we normally do.”