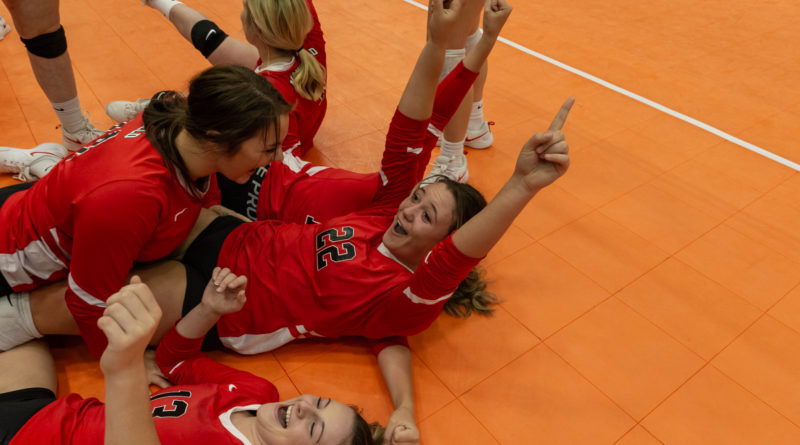 “I told them that it is not easy to repeat,” said Mansfield coach Kaylie Pyles. “You have to stay focused, motivated and humble, and we were able to do that tonight.”

Mansfield won a match in which each set got progressively close, defeating the Warriors for the fourth time this year.

In the second set, the Lady Tigers led 15-14 before outscoring the Lady Warriors 10-5 thanks to three attack errors by Life Way and a serve that went out of bounds.

In the third set, the match was tied 6-6 before Mansfield went on an 8-1 run highlighted by five consecutive aces by Skynn Harris that pushed the lead from 9-7 to 14-7.

At that point, Pyles called timeout and Mansfield put the match away with a kill by Madelen Jones and state tournament MVP Natalie Allison.

“I told them that we don’t need to relax. We need to get the ball to our hitters and set the ball for them,” Pyles said.

Allison said, “I’m very excited. We’ve been through a lot this season and to see everything come together is exciting. We’ve worked very hard and it’s nice to see everyone smiling.”

Pyles said, “Allison does a lot of sets, plays the front row, serves and digs. She does everything for us.”

Kelly, whose team made its first trip to the state finals, as a second-year member of the Arkansas Activities Association, was happy his team made it this far.

“We weren’t supposed to be here,” Kelly said. “Everyone said we wouldn’t get out of our conference and we couldn’t win at state. I couldn’t be more prouder of our girls and we look forward to seeing Mansfield again.”