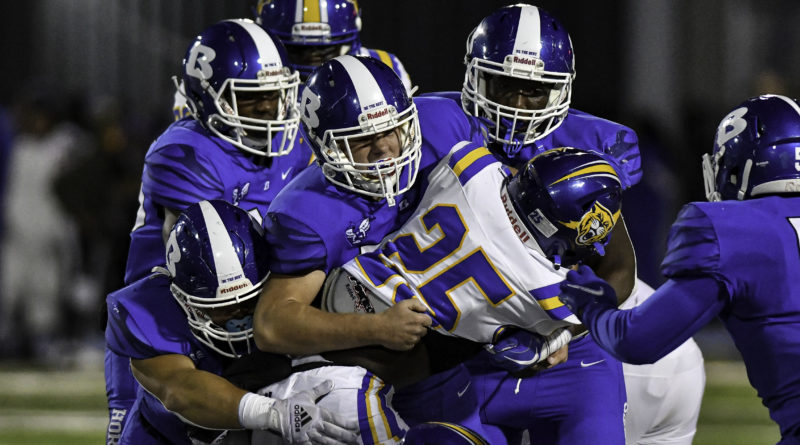 BRYANT — A goal-line stand at the end of the first half loomed large in No. 1 Bryant’s 24-12 victory over No. 3 North Little Rock at Hornet Stadium on Friday night.

After a Bryant punt, North Little Rock took over on the Hornets 45 with 1:10 left in the first half. Runs of 9 and 18 yards by Torrance Moore and runs of 6, 2 and 9 yards by Javonte Harris got the Charging Wildcats down to the Hornets 1 with 13 seconds left. With no timeouts, North Little Rock quarterback Malachi Gober spiked the ball to stop the clock. Gober then handed to Moore, who got stacked up for no gain causing the first half to end.

“It was,” said North Little Rock coach Randy Sandefur, whose team fell to 7-2 overall and 4-2 in the 7A-Central Conference. “If we score there, we have some momentum.”

Bryant coach Buck James, whose team is now 8-1 and 6-0, said, “That was a play where we were good and lucky. We stopped them and it turned out time ran out.”

The goal-line stand was one of two missed opportunities in the first half for the Charging Wildcats. On their first possession of the game, North Little Rock held the ball for eight plays marching from its 22 to the Bryant 19, where the Charging Wildcats ran a reverse to Johnny Lewis, who fumbled and the Hornets took over. Eight plays later, with six plays coming on the ground, Carson Burnett found Blake Everett over the middle on a crossing pattern for a 9-yard touchdown at the 4:41 mark. Stephen Fuller’s extra point was good, giving the Hornets a 7-0 lead.

“That was a turning point,” said James. “We came out of that and scored. Tonight was a night, where we got a lot of breaks.”

Sandefur said. “That was tough because you don’t plan on fumbling. We had the ball and some momentum and the ball didn’t bounce our way.”

North Little Rock needed three plays to get on the board with Gober finding Jiquori Stewart on a fly pattern for a 58-yard touchdown pass. A bad snap on the extra point kept the score at 7-6 at the 3:38 mark.

Bryant answered with a 13-play, 74-yard drive ending with James Martin scoring from a yard out at the 10:56 mark of the second quarter. Fuller’s kick made it 14-6.

The Hornets had a chance to extend the lead to 21-6, but a 79-yard touchdown pass from Burnett to Jordan Knox was called back on a offensive pass-interference penalty

Penalties were a big part of the game. The Hornets were flagged 12 times for 125 yards and North Little Rock was called for five times for 70 yards.

“There were a lot of penalties in the game, but part of that was you have two teams getting after each other,” James said.

Bryant opened the second half, keeping the ball for 10 plays before Fuller’s 45-yard field goal fell short at the 7:22 mark.

Three plays later, Gober was intercepted by Miguel Graham, who ran it back 16 yards to the North Little Rock 23. The drive stalled after three plays and Fuller came on for a 38-yard field goal, which he made at the 5:34 mark to put the Hornets up 17-6.

Bryant’s defense held North Little Rock to 253 yards and held Gober to 4-of-17 passing for 105 yards. Moore led the Charging Wildcats with 122 yards rushing on 20 carries.

The Hornets managed to 326 yards in offense with Burnett completing 12-of-29 passes for 170 yards and Mytorian Singleton catching 5 passes for 72 yards.

After a 28-yard North Little Rock punt and a personal foul on North Little Rock gave the Hornets the ball at Charging Wildcat 32, Burnett threw 18 yards to Singleton, setting up Burnett’s 18-yard touchdown run around the right side. Fuller’s kick was good and Bryant led 24-6 with 3:07 left in the third quarter.

“We knew this would going to be a tough game,” James said. “This has been a heck of a rivalry for the past six years and it feels good to win this game.”

Sandefur said. “This was a hard, fought game and they made a few more plays than we did.”

Bryant will meet Conway for the 7A-Central Championship while North Little Rock closes the regular season at Cabot.

“I hadn’t thought much about Conway, but we have to play well or they will do to us what they did to North Little Rock (referring to Conway’s 38-10 victory on Oct. 1),” said James.

Sandefur said, “We can’t win the conference championship, but we’re going to go to Cabot and try and end the regular season on a high note. We’re in the playoffs, and all of our goals are still in front of us. We want to be one of the last two teams in Arkansas playing.”