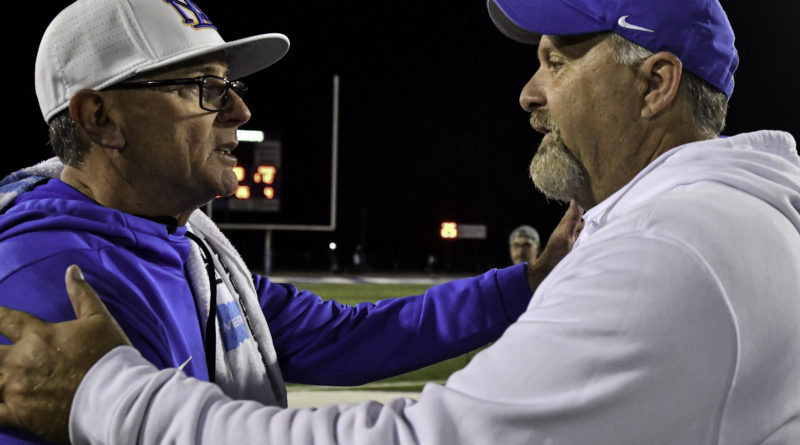 The Hornets had to work to put the Charging Wildcats away after leading 14-6 at halftime.

The Wampus Cats empty the bench in another blowout and get ready to host No. 1 Bryant next week for the 7A-Central Conference title.

The Charging Wildcats went toe-to-toe with the three-time defending champions but probably will always wonder what might have happened if they had scored on the 2nd-and-goal play on the 1-yard line as time ran out in the first half before they could get in.

The Bulldogs hand Heritage its 35th straight conference loss and now are a win over Springdale Har-Ber next week from securing an undefeated 7A-West Conference title.

The only thing that changed for Shiloh this week is it moved to its highest ranking of the season before yet another blowout win.

The Bruins clinch yet another 5A-Central Conference title with an easy win.

The Tigers get back to form this week after struggling to beat Rogers last week.

Even with 499 yards of offense, Lake Hamilton couldn’t get the one-and-a-half yards it needed to convert on a two-point conversion to win the game with just more than a minute to play.

The Panthers get a big, hard-fought win to keep themselves in contention for the third seed in the 7A-Central Conference.

The Panthers’ undersized safety, Cain Simmons, proves why he is one of the best secondary players regardless of class, stopping Lake Hamilton star running back Tevin Hughes on a two-point conversion attempt that clinched the win for the Panthers.

The Hurricane defense continues to lock down, and they aren’t threatened by the Bears as they inch closer to an undefeated 6A-East Conference title.

The Patriots hang on for a surprisingly difficult win against the Panthers, who haven’t won in 6A-West Conference play.

Another close loss to a highly ranked team which has to be frustrating, but the Grizzlies could still be a tough out in the 7A state playoffs.

The Yellowjackets roll as predicted and now face surprising undefeated Nettleton for the 5A-East Conference title.

The Bulldogs continue to get healthier and tune up for an important 6A-West Conference finale at home against Lake Hamilton next week.

The Warriors get well and hope to continue the momentum in the season finale next week against Watson Chapel and enter the playoffs as a No. 3 seed.

The Wildcats seemed to have the game in hand up 52-35 in the second half but had to hold on to beat the Lions.

The Eagles hold off the Devil Dogs to set up an undefeated showdown against Greenbrier to try to clinch their first conference title since 2003.

Like the Eagles, Greenbrier rolls past a lower-tier 5A-West opponent to set up the big Judge’s Cup game next week.

The Lumberjacks have mercy-ruled the past four 8-4A Conference opponents they have faced and will not play next week due to a forfeit by Helena Central and might not play in the playoffs until mid-November with a playoff bye.

The Senators’ defense locks down on a potent Panthers team on the road.

The Ricebirds pick up a decisive win against an upper-echelon Lonoke team on its way to a 2-4A Conference championship.

The Cardinals fly past the Blackhawks and can clinch the third seed in the 5A-West.

The Bears drop their second straight game and now are looking at the No. 3 seed in the 6A-East Conference.