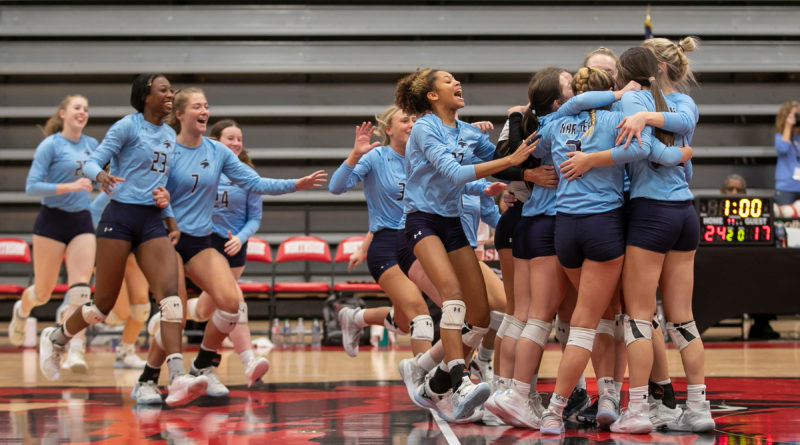 FORT SMITH — Of the 15 players listed on Springdale Har-Ber’s volleyball roster, 14 of them are seniors.

And with those seniors having fallen short each of the past three seasons in the semifinal round, they were determined to finally break through in Thursday’s 6A semifinal round against Fort Smith Southside.

The Lady Wildcats were able to do so. But there’s still one more order of business left.

Har-Ber broke open a pair of ties late in each of the opening two sets. The Lady Wildcats then took control early in the third set as they went on to a three-set sweep against the Lady Mavericks (25-22, 25-21, 25-17) at Northside High School’s brand-new arena.

“I feel like coming in, after the past three years and making it to the semis and losing them, we deserved this game since day one of off-season this year,” Har-Ber senior outside hitter Kyla Clubb said. “This was it, and if we didn’t push here, then that was going to be it for all 14 of us seniors.”

Har-Ber (33-1) will move on to the 6A state title match in Hot Springs and will take on 6A-West rival Fayetteville.

“It means everything in the world. … Just to see their growth and their passion and all the work they’ve put in this offseason since January has paid off and helped them get over that hump in the semifinal match is just really rewarding,” Har-Ber coach Cassie Loyd said.  “I feel very blessed to be their coach, and it’s just an awesome thing to be a part of.”

Southside, which had been state runner-up each of the past three seasons, returned to the semifinals despite graduating three college signees in Avery Fitzgerald (Mississippi State), Hannah Hogue (Arkansas) and Aleigha Johnson (Wright State).

Early on, bolstered by a raucous group of students who made the crosstown trip over to Northside, the Lady Mavericks played inspired.

Three kills from senior hitter Toree Tiffee staked them out to a 5-2 lead. Har-Ber went in front before Southside senior Olivia Melton’s kill tied things up at 8-all.

Har-Ber eventually took a 16-14 lead in the first set and after giving up the next four points, fought back to tie it at 18-all. But Har-Ber seniors Kinleigh Hall and Kaylynn Bennett delivered kills on each of the next two points, and the Lady Wildcats never looked back.

Har-Ber extended its lead to four, 24-20, on a kill from senior Clubb, who then had a kill on set point.

In the second set, Har-Ber opened up a five-point advantage, 19-14. But once again, Southside answered, this time reeling off five straight points to even the match at 19-all.

Hall untied it again with a kill to put her team in front to stay. On the next point, senior Maddux McCrackin served up an ace. Later in the set, another ace, this coming from Josie McCroskey, made it 24-20.

For the second straight set point, Clubb’s kill ended affairs as Har-Ber took a 2-0 lead in the match.

“I think we just stayed calm and played together and didn’t freak out,” Hall said. “I think we trusted each other and knew that we could win the sets, even though it was close.”

It was all Lady Wildcats in the third set as they scored the first three points and seven of the first eight. Har-Ber built a 13-4 lead on another kill from Hall, and Hall added a kill which gave the Lady Wildcats their biggest lead at 12 points, 22-10.

“Coming out into the third set, we all knew what we had to do and we just did it and that’s why the scores were what they were,” Clubb said.

On match point, senior setter Caylan Koons passed it to her teammate, Kat Cooper, who hit a dink shot that Southside wasn’t able to return.

“We’ve had our backs against the wall a lot this season, and the one thing we’ve done really well is just stay consistent and play Har-Ber volleyball regardless of the situation,” Loyd said. “In the quarterfinals (a three-set sweep Wednesday against Northside) we were down 10-17 in a set and just kept preaching to the kids, ‘Play Har-Ber volleyball, be good teammates, it’s never over.’

“I think that consistency has really got us to that point in the season where we’re at right now and really helped us to win this match (Thursday).”

Clubb finished with a team-high 14 kills, while Hall added 11 kills without making a single hitting error. Cooper was in double figures in kills as well with 10.

Coons also had 41 assists and three aces, and McCroskey finished with 22 digs.

Now that the Lady Wildcats have finally made it to Hot Springs, they’re still not quite satisfied until they can get one more win.

“We just need to keep being mentally tough and focus on the game in front of us and not on the outcome that can happen,” Hall said.