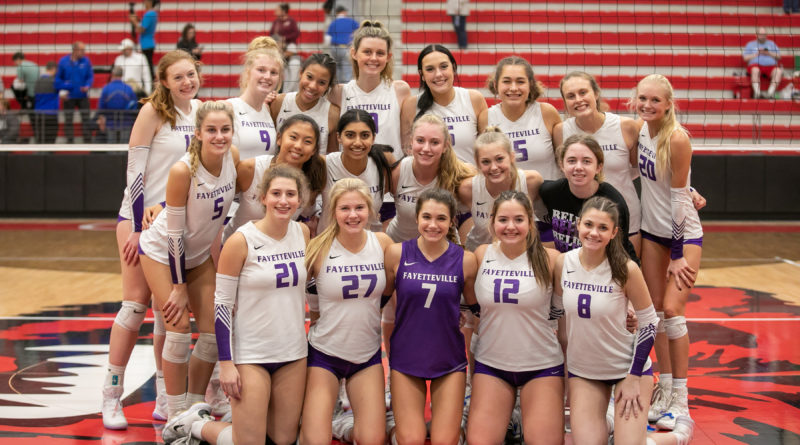 FORT SMITH — There were times during Thursday’s 6A volleyball semifinal match where Fayetteville was having a great degree of difficulty.

In the end, though, the Lady Bulldogs displayed their championship mettle and will get to go back to Hot Springs for the opportunity to repeat as 6A champions.

“Both teams just played really hard,” Fayetteville coach Jessica Phelan said. “At this point in the year, you’re going to have to make some plays, and I think both sides of the net, we had to earn our points, and I was happy that my team responded after dropping set two.

“We were able to get some momentum there at the end and stay aggressive. We’re happy to be heading to Hot Springs.”

That will be on Saturday, when the Lady Bulldogs (31-4) take on a familiar foe, 6A-West rival Springdale Har-Ber, at BankOZK Arena for the 6A championship. When the two teams played in the regular season, Har-Ber swept the conference home-and-home, though the Lady Wildcats needed five sets in both instances.

“Obviously, two really talented teams of kids, and we have a lot of respect for Har-Ber and their program and how hard their kids play,” Phelan said. “I think that it will be a great volleyball match for sure.”

Last season, Fayetteville claimed the 6A championship after beating another conference rival, Southside.

“It feels really great; we’re all really excited,” senior middle blocker Sophie Snodgrass said. “We’ve been working for this all year; we knew we’d get here, so we’re all just really, really excited to get to go back (to Hot Springs) this year.

In a tight opening set Thursday, Fayetteville was ahead by a point, 18-17, before getting some separation, running off six of the next seven points. Junior outside hitter Brooke Rockwell had a couple of kills, and Snodgrass was in on a pair of blocks.

Rockwell then clinched the first set with another kill.

But Conway – which rallied from a 2-0 deficit to beat Bentonville in five sets in Wednesday’s quarterfinals – answered in the second set, racing out to an 8-3 lead. Fayetteville got within a point (13-12) before the Lady Wampus Cats reeled off a 7-0 run, with senior Madison Holloway making some big plays up front.

Conway seemed to remain in control to start the third set as the Lady Wampus Cats jumped out to a 7-2 advantage. But Fayetteville responded with a 12-3 surge to move in front.

A kill from Rockwell followed by a block from Snodgrass helped give the Lady Bulldogs some breathing room, 19-14. Rockwell and Snodgrass then capped the set with consecutive kills.

Fayetteville scored the first six points in the fourth set, three coming on service aces from junior libero Ashley Ruff. But once again, Conway responded, scoring 13 of the next 19 points to take the lead.

The score was even at 15-all before the Lady Bulldogs put together one more pivotal surge, the surge that enabled them to return back to the “Spa City” to defend their championship.

A hitting error by Conway broke the tie, and consecutive kills by Rockwell and junior Madeline LaFata made it 18-15. Snodgrass had three more kills down the stretch while junior setter Kennedy Phelan served two aces, the latter for a 24-15 advantage.

“I think we kind of got in a little bit of a rut there in the middle, but we came back, played strong, played together and had some big points at the end there,” Snodgrass said. “We all played together.”

Rockwell led the team with 25 kills and added 12 digs. LaFata added 12 kills. Also for the Lady Bulldogs, Ruff recorded 33 digs to go along with her three aces in the fourth set, while Phelan had 53 assists and 10 digs as well as five blocks.