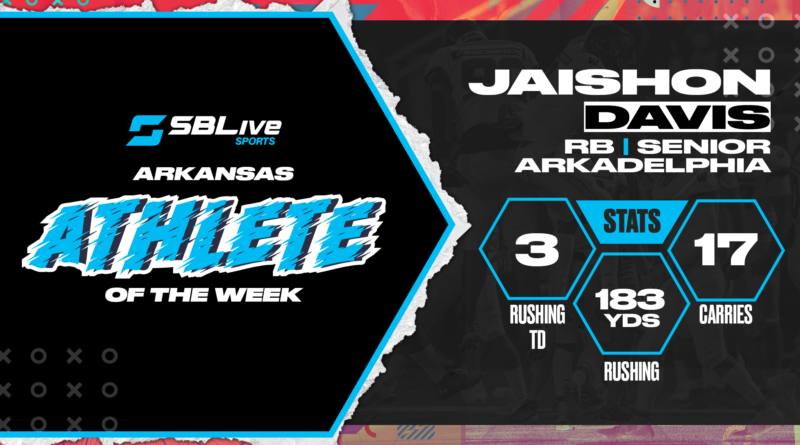 Congratulations to Arkadelphia running back Jaishon Davis for being voted SBLive’s Arkansas High School Athlete of the Week for Oct. 11-17!

Davis received 46.35% of the vote, beating out Benton’s Jack Woolbright who finished second with 33.35%. Hamburg’s Tracker Whited finished third with 8.6% and Camden Fairview’s Martavious Thomas finished fourth with 7.43%. There were over 31,000 votes tallied this week!

Hudson won the Bomber Invitational in Mountain Home in 15:47.50.

Eslick won the Lake Hamilton Invitational at Oaklawn Park in Hot Springs in 15:58.1.

Wasemiller finished second and was the highest finishing Arkansan in the Bomber Invitational in Mountain Home in 18:15.36.

Nachtigal won the Class 5A-6A division of the Prairie Grove Invitational in 19:10.96.

The senior picked off two passes, including a 49-yard touchdown return, and added a 34-yard fumble return that set up another touchdown, in the Bulldogs’ 42-34 victory over Bentonville.

Grant won the Class 5A-6A division of the Prairie Grove Invitational in 16:53.06.

The junior ran 24 times for 102 yards, caught seven passes for 52 yards, and returned a kickoff for a touchdown in the Wampus Cats’ 23-21 victory over Fort Smith Northside.

Wharton won the Class 1A-4A division of the Prairie Grove Invitational in 19:41.67.

The junior rushed nine times for 150 yards and a touchdown and led the defense with 8.5 tackles in the Lions’ 45-30 win over Helena-West Helena Central.

The junior had a 72-yard interception return that led to a touchdown and added a 60-yard kickoff return to set up another TD in the Panthers’ 52-23 win over Mountain Home.