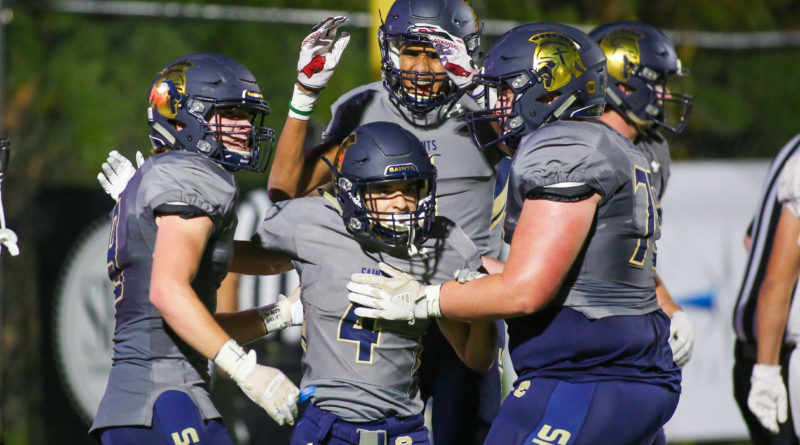 SPRINGDALE — What looked like a challenging matchup on paper quickly went off script in the first half of Friday night’s clash between the 4A-1 Conference’s top two teams at Champions Stadium.

Defending state champion Shiloh Christian played host to Elkins, as both teams came in with unblemished 4-0 conference records. But the Saints (7-1, 5-0) wasted little time in establishing themselves as the undisputed front-runners, rolling out to a 43-0 halftime lead, en route to a 50-0 victory.

“Last year, they jumped ahead of us 21-0, so our focus was on ourselves tonight, and making sure we started fast, making sure we did what we coach our guys to do,” Shiloh coach Jeff Conaway said, referring to last season’s 49-28 comeback victory in Elkins. “I thought we did that well in all three phases tonight.”

Saints junior quarterback Eli Wisdom showed what he could do on the ground and through the air, on the game’s opening drive. Wisdom had scrambles of 19 and 12 yards during the 10-play drive, before hitting Cooper Hutchinson with a 9-yard strike to make it 7-0.

After an Elkins punt, Wisdom capped off a 58-yard drive by connecting with Bodie Neal for a 12-yard touchdown. Three minutes later, it took just one play for Wisdom to hit Hutchinson again, for a 50-yard strike to make it 22-0 with 1:28 still remaining in the first quarter.

“I don’t think it could have gone any better for us in the first quarter — we were able to get stops, defensively, and move the football well, offensively,” Conaway said. “Our receivers did a good job or creating some separation and Eli was putting the ball on the money, and our run game was clicking. I think any team is dangerous when those things are working, so I’m just proud of the way our guys started.”

Wisdom threw his fourth touchdown pass early in the second quarter, hitting Kahlil Mobley from four yards out to extend the lead to 29.

“It all started in practice this week,” said Wisdom, who only played in the first half, but managed to complete 12 of 17 passes for 291 yards. “We had one of our better weeks of practice, we came in focused, and we brought that intensity out here on the field tonight.”

Wisdom set up the next score midway through the quarter with another 50-yard strike to Hutchinson. But it was Ben Baker who broke loose for a 28-yard run to the Elks’ 1-yard line, before getting into the end zone on the following play.

Sophomore Bo Williams completed the first-half scoring with a 4-yard run to make it 43-0.

“Our defensive staff did a great job of mixing it up,” Conaway said. “We made it very difficult for them to run. Then when they tried to pass, we had some exotic pressures that I thought worked really well. We were able to pressure their quarterback and our secondary did a good job of attaching to their receivers.”

The staunch Shiloh defense, led by Arkansas Razorback linebacker commit Kaden Henley, actually held Elkins to just 55 totals yards in the first half, including only 10 on the ground.

“Elkins is a good team, but we just came out tonight and out-executed them in all phases,” Henley said. “We knew coming in that it was going to be a conference-championship type of game, but we had two great practices coming in and felt we were ready for the challenge. Coach (Jacob) Gill and our coaching staff put in a great defensive game plan, and we just went out there and tried to exceed their expectations, which I think we did.”

After Cameron Arellano’s 19-yard run capped the score midway through the third period, and interception by Hutchinson thwarted Elkins’ most promising drive.

Although Elkins (7-1, 4-1) was outgained in total offense, 461-133, the Elks did get a productive second-half effort from Colby Campbell, who racked up 54 yards rushing on 12 attempts.

“They are a very good team, with a first-year coach who has been able to do a lot with what he has,” Conaway said, praising the efforts of Elkins new coach Zach Watson and his staff. “They are doing a great job at Elkins, and I’m sure they will only get better. Champions Stadium is a tough place to come into for any team, and I thought our guys upheld their end as far as the homefield advantage.”

Shiloh’s lone loss this season came at the hands of out-of-state foe Sand Springs (Okla.) Page, 40-33, in week 2. But Conaway knows the importance of keeping his squad focused on the process.

“We just try to stay focused on the process of coming out every day, trying your hardest to get better and stay focused,” he said. “Our guys were really focused on this game, and we need to continue that process.”

The Saints will travel to Gravette next Friday night, while Elkins hosts Gentry.