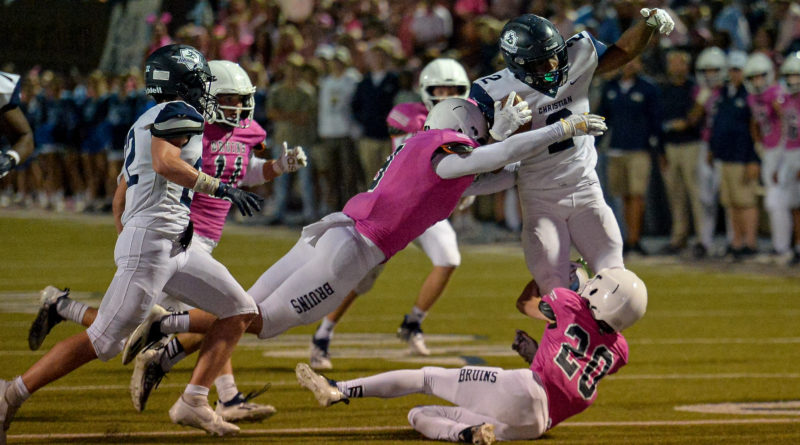 “I’m proud of my kids tonight,” said Pulaski Academy coach Anthony Lucas. “This is a big rivalry and this always gets our kids going.”

Little Rock Christian had 15 first downs, 284 yards in total offense, turned the ball over four times and reached the Bruins 22, 1, 29 in the first half, but came away no points each time.

Little Rock Christian Coach Eric Cohu said, “Pulaski Academy came out really strong and we didn’t. The big thing is they executed and we didn’t.”

The Bruins opened the game needing three plays to go 71 yards with Fiser completing a screen pass for 50 yards to McKinney. Two plays later, he threw 16 yards to Jordan for the game’s first touchdown. Fiser threw to McKinney for the two-point conversion and the Bruins led 8-0.

After recovering the onside kick, the Bruins needed 47 yards to get into the end zone with Fiser throwing 35 yards to Charlie Barker to set up a 17-yard scoring pass to McKinney at the 10:31 mark. The two-point conversion was no good and the Bruins led 14-0.

Christian’s first possession ended in disaster when Hunt Harrison leaped in the air and intercepted a screen pass by Walker White, giving the Bruins a first down at the Christian 47. After a 30-yard run by Himon, two plays later, Himon carried 17 yards into the end zone. The conversion was no good and the Bruins led 20-0 at the 9:23 mark.

“Joe had a shoulder injury last week, but he worked hard to get ready to play this week and wasn’t going to miss this game,” Lucas said.

Christian reached the Bruins 22 before White’s pass to White’s pass to Cooper was incomplete. Nine plays later, Himon scored from 25 yards out when he broke several tackles at the 2:33 mark. Himon took a direct snap on the two-point conversion and went up the middle to make it 28-0.

Little Rock Christian reached the Pulaski Academy 1 at the 10:53 mark of the second quarter before Dyer-Jones was stacked up at the goal line, giving the ball back to the Bruins.

“You have to finish drives against a team like Pulaski Academy,” Cohu said. “Even on the goal line.”

After Trey Howard intercepted Fiser and gave the Warriors the ball at its 37, the Warriors finally got on the board when White capped off a three-play drive, which featured a 36-yard pass from White to Cooper when White scored from three yards out. Wyatt Thomas’ kick was good and it was 28-7.

After a 75-yard screen pass was nullified because of offsetting penalties, Himon went 75 yards around the left side at the 7:34 mark. Vaughn Seelicke’s extra point was good, making it 35-7.

After Beau Miller recovered Brian Gittens’ fumble on the following kickoff, Jordan took a shovel pass from Fiser and scored from five yards out at the 4:59 mark. Seelicke’s kick made it 42-7.

“That shovel pass is a big part of our offense and we do a lot of things off of that.”

After White was sacked when the Warriors reached the Bruins’ 29, Pulaski Academy needed three plays go 61 yards with Himon covering the final 53 with six seconds left in the half. Seelick’s kick made it 49-7.

Little Rock Christian added an 81-yard touchdown pass from White to Cooper on the first play of the second half. Thomas’ kick made it 49-14.

The Bruins answered with a 10-play, 51-yard drive with Fiser throwing 26 yards over the middle to Jordan with 5:32 left in the third quarter. Seelicke’s kick made it 56-14.

Miller closed out the scoring with a 25-yard interception return with 5:03 left in the game. Seelicke’s kick Mae it 63-14.

“The main thing is we need to focus on the next two weeks and finish strong against Watson Chapel and Jacksonville and get things corrected,” Cohu said.