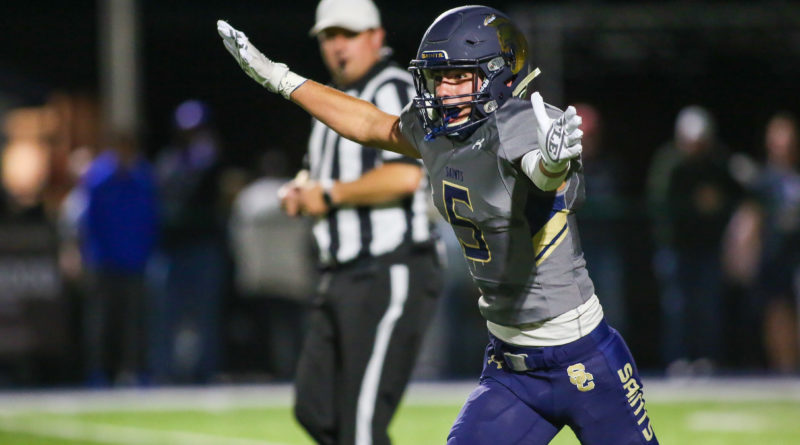 The Hornets will have to wait another week to be tested as an anticipated matchup with Cabot yielded no drama.

The Wampus Cats have no problem with Little Rock Central and face another struggling foe in Little Rock Catholic before the regular-season finale with Bryant.

The Charging Wildcats hold off the pesky Grizzlies to set up a big game at Bryant next week with hope of still sharing a 7A-Central Conference title.

The Panthers drop their second loss to a conference heavyweight in No. 1 Bryant and could drop as low as third in the playoff seedings.

The Bulldogs have outscored opponents 88-16 in the third quarter, and that trend continued Friday night as the Purple Dogs pulled away in the 122nd meeting of ‘The Battle of the Bulldogs.’

Saints junior quarterback Eli Wisdom passed for 295 yards in the first half as SC built a 43-0 halftime lead.

The Bruins made a statement by drilling west Little Rock rival LRCA and secured a win at halftime with a 49-7 lead.

The Tigers hold off an improving Mountaineers team after suffering their first conference loss last week.

One last tuneup before hosting Benton in a huge game in Garland County next Friday.

The Panthers trailed by 12 in the fourth quarter but senior transfer quarterback Stran Smith engineered two big scoring drives to keep the Panthers perfect in the 6A-West with a showdown at Lake Hamilton coming next Friday.

The Grizzlies put up another good fight against a highly ranked team but can’t pull out the win and now look likely to be a No. 4 seed in the 7A-Central Conference.

The Warriors were down 21-0 early in the first quarter and never recovered and have now been outscored 188-69 in their past three games with PA.

The Patriots are trying to finish on a three-game win streak to stay in contention for a second or third playoff spot.

The Bulldogs had the Panthers on the ropes but couldn’t pull off the upset and now could drop to a No. 4 playoff seed.

The Yellowjackets are mowing down lesser competition as a showdown with Nettleton awaits in Week 10.

The Bulldogs most likely clinched the No. 2 seed in the 5A-Central Conference with the easy win.

The Eagles are on a collision course with undefeated Greenbrier in Week 10 for the 5A-West Conference title.

The Cardinals’ defense couldn’t contain the potent Panthers offense and now will most likely be a No. 3 seed in the Class 5A playoffs.

The Panthers’ blowout was fueled by senior quarterback Cooper Wilcox, who totaled 240 yards passing and a touchdown and 75 yards rushing and two scores.

The Bears couldn’t contain the Wildcats’ potent offense and now could fall to as low as the No. 3 seed in the 6A-East Conference standings.

The Lumberjacks ran all over the Billies with senior running back Cedric Calbert totaling more than 100 yards rushing and two touchdowns.

The Senators run past Bauxite and now face Ashdown next week in a game that has lost some of its luster as the Panthers were upset Friday night.

The Ricebirds’ offense has scored 40 or more points the past four games as the team looks to lock up a 2-4A Conference title.