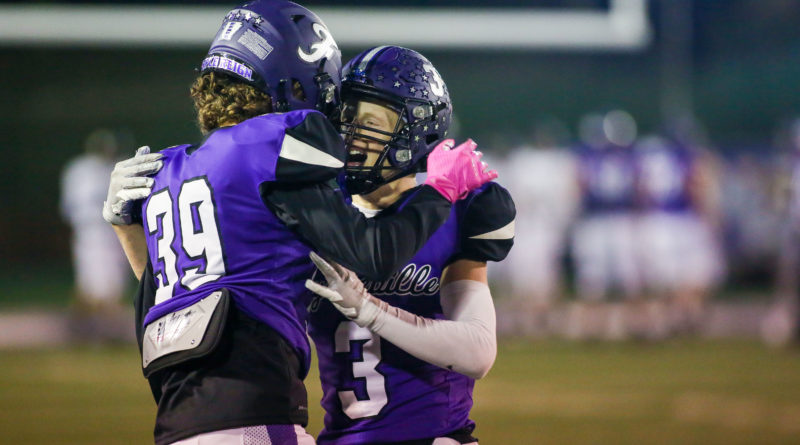 Fayetteville beat Bentonville last week to move into the Top 5. Other than that, only one other team in the Top 25 lost. This week’s slate has many big games with ranked teams, so there could be some movement next week.

The Hornets begin the gauntlet of three 7A-Central Conference title contenders with a tough game at No. 4 Cabot on Friday night.

The Wampus Cats sit atop the 7A-Central standings undefeated along with Bryant and play two less-challenging games (including Little Rock Central this week) before locking up with the Hornets in the regular-season finale.

The Charging Wildcats must beat a Fort Smith Northside team, which had Conway on the ropes last week, to have any chance of sharing a conference title.

The Panthers haven’t lost at home this season and would love to keep that streak intact as they keep hopes of sharing a conference crown alive.

The Bulldogs’ three-game march to the 7A-West title begins with Springdale this week.

The Saints haven’t lost to Elkins (6-0) since 1993, but after falling behind by 21 points last year, only to win by 21, it’s a sure bet the Elks have their attention this go-around.

The Bruins can take a big step toward locking up another 5A-Central Conference crown with a win over west Little Rock rival Little Rock Christian — a rematch of the past three years’ Class 5A state title games, in which the Bruins are 2-1.

The Tigers have little chance at winning a 7A-West Conference title after losing to Fayetteville last week, but they will be favored to win out and make a deep playoff run.

Lake Hamilton won’t have any problem with Van Buren, which has lost starting quarterback Bryce Perkins for the season, this week as it prepares for a home showdown with Benton next week.

The Panthers begin a tough back-to-back stretch with Greenwood at home this week and Lake Hamilton on the road next week with the 6A-West title up for grabs.

If the Hurricane can get though Searcy, which has shown flashes of brilliance, this week, they will play at Sylvan Hills next week for the 5A-East crown in what could be one of the marquee games of the year.

The Warriors are looking to snap a three-game losing streak to Pulaski Academy after losing in the Class 5A State Championship game in 2019 and a sweep last year in the regular season and the title game — both by significant margins.

The Grizzlies must beat North Little Rock on Friday to hold a spot in the upper echelon of the 7A-Central.

After running the gauntlet of the 6A-West elite, the Patriots feasted on a struggling Van Buren team last week and Thursday night host 3-4 Russellville.

The Bulldogs got quarterback Hunter Houston back last week but have lost starting running back Jake Glover with a season-ending ankle injury, making a game at Benton on Friday even tougher.

The Yellowjackets will face Paragould this week and Forrest City next week before meeting Nettleton for the 5A-East Conference title.

The Bulldogs hope to keep the No. 2 seed in the 5A-Central Conference with a win over Maumelle. Maumelle’s 3-5 record is deceiving.

The Wildcats hope to hand Sylvan Hills its first league loss and cement itself as the No. 2 seed in the 6A-East.

The Eagles should take care of 5A-West foes Alma and Morrilton the next two weeks, setting up a showdown with Greenbrier in two weeks.

The Cardinals need to beat Greenbrier to stay in the hunt for a shared 5A-West Conference title.

The Panthers have the home-field advantage against the inexperienced, but dangerous, Cardinals this week as they hope to do their part to set up a showdown with Vilonia in two weeks.

A dangerous El Dorado squad stands in the Bears’ way of setting up a big game with 6A-East Conference title game implications with Jonesboro next week.

The Lumberjacks face rival Monticello and take one step closer to another 8-4A Conference title.

The Senators shouldn’t be challenged by Bauxite this week but could face their toughest test of the year, other than the opening loss to Pulaski Academy, at undefeated Ashdown next week.

Two weeks ago, the game at Little Rock Mills this week looked like a big one, but after the Comets lost two straight and with star running back Jabrae Shaw still nursing an ankle injury, the matchup has lost some of its luster.