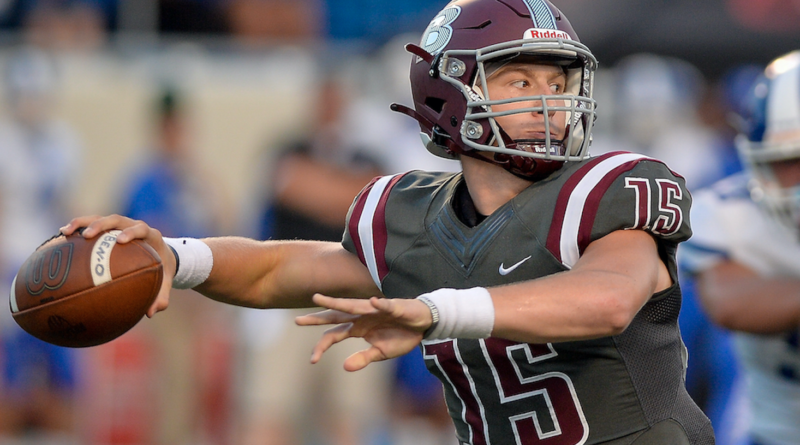 Over the next few weeks, we’ll be taking a position-by-position look at some of the top players in Arkansas high school football. This list focuses on the quarterbacks.

There are hundreds of standout football players in Arkansas and these lists are not intended to be comprehensive. Use the comments section to discuss the other signal-callers worthy of fans’ attention in 2021.

Smith was a backup each of the past two seasons on the Wildcats’ back-to-back 3A state championship teams. Now he’s taken over as the starter and has completed 126-of-176 passes for a 71.6 percent completion rate so far this season while throwing for 13 touchdowns. He has also rushed for 210 yards and six touchdowns. “His ability to run the ball so effectively is something we believe will benefit him coming down the final stretch of the season,” Harding Academy coach Neil Evans said.

Forrester is in his first season to start for the Mustangs, taking over a team that has won at least 10 games over the past two seasons. So far in 2021, he has completed 67 percent of his passes for 787 yards and 13 TDs while adding 575 yards on the ground and seven TDs. He has offers from, among others, Arkansas-Monticello and Northeastern (Okla.) State. “Very proud of Cade and how this season has worked out so far for him,” Hoxie coach Tom Sears said. “Ultimate team player. … He will also now have an opportunity to play beyond high school. He is a tremendous competitor.”

An All-State quarterback his sophomore year, Scott is helping lead the Tigers in strong position for the 3A-1 conference title. He currently leads the team in rushing with 221 yards on 44 carries with six TDs but has been able to air it out. He has thrown for 776 yards and four TDs. “Brandon is a winner and one of the best athletes I have ever coached,” Charleston coach Ricky May said. “He is even a better young man who coaches K-2 flag football and mentors a younger player. He currently owns a 4.1 GPA.”

Though the Mavericks have struggled at the outset of 2021, Sorg remains a bright spot in his second season as the team’s starting signal caller. He has already thrown for more than 1,230 yards with 13 TDs. “This is his first year in a new offensive system, and he’s a multi-sport athlete,” Southside coach Kim Dameron said of Sorg, who recently committed to play baseball at Oklahoma.

In his first season as a starter, Gunter has completed 56 percent of his passes and has nine touchdowns while adding three more rushing TDs. “Ethan is a smart player that really understands the game,” Nashville coach Mike Volarvich said. “He comes to work every day looking to get better and wanting to be coached. He wants to be the best QB that he can be.”

Baker was an All-State running back a season ago before shifting to quarterback in the offseason. He also starts at inside linebacker. Baker still has a propensity to run the ball, having gained 957 yards on 118 carries through five games along with 15 touchdowns. He has also thrown for 228 yards and a pair of TDs. “Connor is a very competitive kid,” Pocahontas assistant coach Cannon Davis said. “He really wants to be the best that he can be and works like that everyday. … Offensively, he runs the ball very hard and is very shifty with a good burst for his size.”

Whitten takes over at quarterback for the Badgers after focusing on defense his sophomore season. He has thrown for nearly 1,330 yards and 16 touchdowns. “He has a big arm and can make plays with his legs also; he’s just a strong runner,” Arkadelphia coach Trey Schucker said.

Smith has completed 61 percent of his passes this season through the Panthers’ first six games (95-of-155). He also has 1,615 yards and 18 TDs without throwing an interception in that span. “He’s a dual-threat QB, and he has been really good with the ball this year,” Benton coach Brad Harris said. “He does a good job of extending plays when the pocket breaks down and is always looking to throw the ball, he can make plays with his legs and is a very good leader on the field.”

Omolo has already posted some impressive numbers in his first season to start behind center. He has completed 102-of-172 passes for 1,509 yards and 15 TDs. Omolo has added 183 yards rushing and two TDs. “Donovyn is extremely athletic with a really good arm,” Conway assistant coach Mark Kelley said. “He has also done a really good job protecting the football all year.”

Catsavis took over as the Grizzlies’ starting quarterback late in the 2020 season after moving over from receiver. He’s maintained the starting position this season, having thrown for 935 yards and 11 TDs. “He’s done a good job; he’s been here every day, worked hard and has spent a lot of time with (Northside offensive coordinator Greg) Kendrick,” Northside coach Mike Flair said. “He knows the offense and knows what we want. … He’s very effective throwing the ball and he’s very effective with his feet.”

Vanzant is making the Cardinals’ offense go in the team’s first season under coach J.R. Eldridge. So far, Vanzant has completed 66 percent of his passes (98-of-148) for 1,233 yards and 15 TDs. “Cameron is a good leader with a high football IQ,” Eldridge said. “He has taken command of our offense and will continue to get better. He is very coachable and has a competitor’s mentality.”

An All-State selection last season, Jones returns behind center for the Eagles. In 2020, despite the Eagles playing only eight games due to COVID-19, he threw for 1,411 yards and 13 TDs while rushing for 1,007 yards and 15 TDs. Jones has followed that up this season with more than 1,000 yards passing and 11 TDs, along with 570 yards rushing and five TDs, including a 91-yard touchdown run. “Tyrique ran a 4.4 and vertical jumped 38 at every camp he went to last summer. … He is a ball player,” Crossett coach Shawn Jackson said.

Cleveland saw limited action for the Senators last season, throwing for nearly 150 yards. He’s taken over as the full-time quarterback this season determined to lead Robinson to a 4A title. So far, Cleveland has completed 65-of-92 passes for 1,264 yards and 13 TDs, five of those coming in a recent game against perennial power Nashville.

White, who also plays safety for the Patriots, recently committed to play at Ole Miss. He’s a threat to run and pass the ball at quarterback, having gained 376 yards on the ground with six TDs. In the Patriots’ first four games, which included a win against defending 6A champion Greenwood, White threw for nearly 440 yards and four TDs.

Trusty, who transferred to Alma from nearby Greenwood in the offseason, has made an immediate impact with his new squad. Through the Airedales’ first five games, Trusty has thrown for 1,083 yards and eight TDs on 70-of-117 completions while adding 178 rushing yards and a TD. “Joe has tremendous arm strength and running capabilities,” Alma coach Rusty Bush said.

A season ago, Fiser threw for 2,761 yards and 38 touchdowns for the eventual Class 5A state champions. Already this season, he has completed 99-of-183 passes for 1,611 yards and 21 TDs. “He has a high IQ on football, and he’s good both in and out of the pocket,” PA coach Anthony Lucas said. “Charlie also has a strong arm and what I love about him the most is that he’s a great kid both on and off of the field.”

Wisdom was an All-State selection last year, throwing for more than 2,100 yards and 23 TDs while running for nearly 1,500 yards, scoring 24 TDs. He was also named the MVP of the 4A championship game. Wisdom began this season by throwing for 256 yards and three TDs while adding two rushing TDs in a win against Pea Ridge. He also threw for 306 yards and four TDs while adding a rushing TD in a win against Berryville, and in a recent win at Prairie Grove, Wisdom rushed for 112 yards and three TDs.

White was named the starting quarterback in the spring with hopes of taking the Warriors to the next step, a season after falling in the 5A state championship game. He’s completed 68-of-128 passes for 1,042 yards and 10 touchdowns. “Walker has done a great job of making plays for us,” Little Rock Christian coach Eric Cohu said. “He is a superior athlete that is getting recruited by several major colleges.”

A season ago, Talley threw for 1,752 yards and 14 TDs and added 627 yards and 13 TDs rushing in earning All-State honors. Already this season, Talley has completed 98-of-161 attempts for 1,454 yards and 12 TDs along with 644 rushing yards on 93 carries with 14 TDs. “He is playing amazing this year,” Siloam Springs coach Brandon Craig said. “Also, he is an outstanding student that takes AP classes and has a 35 on the ACT.”

Plumlee, who also plays basketball and baseball, saw limited action on the gridiron as a junior, throwing for 165 yards. He’s definitely increased on those numbers in 2021, passing for 1,165 yards on 77-of-127 attempts and 15 touchdowns.

Rester accounted for more than 1,000 yards of total offense last season and is building on those numbers in 2021. Already, he has thrown for 1,556 yards on 79-of-122 completions with 19 TDs to go along with 266 yards rushing and three TDs. “Sharmon is the most dynamic playmaker in Arkansas high school football,” El Dorado coach Steven Jones said. “He is locked in and continuing to put up video game numbers. Nobody plays with more focus.”

Myers is back for his third season as the Eagles’ starting signal-caller. He saw limited action as a junior, playing in only six games due to a thumb injury, but before that was able to throw for 903 yards and five TDs. Myers has already thrown for nearly 1,700 yards and 24 touchdowns this season while receiving interest from several Division I schools.

Scarlett is a returning All-State player, having passed for 796 yards and seven TDs while rushing for 888 yards and 13 TDs as a junior. He’s already received attention from various Division II schools statewide, as well as nearby Arkansas State. Scarlett has nearly identical passing and rushing yards as a senior this far, passing for 588 yards and 10 TDs while rushing for 555 yards and six TDs. “He is a dual threat QB who can hurt you with his legs or arm,” Nettleton coach Steven Hampton said. “He is a team captain and a leader of our team.”

Wright’s father, Dan Wright, is a former Major League Baseball pitcher, notably with the Chicago White Sox. Drew Wright brings an arm of his own, albeit in a different sport, though he does pitch for the Bentonville baseball team. For the Tiger football team, Wright has completed 64-of-105 passes for 877 yards and nine TDs. “Drew is a very smart QB who has phenomenal work ethic and is a student of the game,” Bentonville coach Jody Grant said. “He has a big arm and can make every throw.”

Watts returns as the Eagles’ signal-caller after throwing for more than 2,000 yards and 40 touchdowns as a junior. Through his team’s first six games in 2021, Watts has completed 80 percent of his passes (51-of-64) for 893 yards and 12 TDs, throwing TD passes to six different receivers, while rushing for 97 yards and three TDs. “Because our first five games were all mercy rules, he hasn’t had many attempts,” Paris coach Jeff Weaver said. “He is capable of carrying us with his arm if we need him to.”