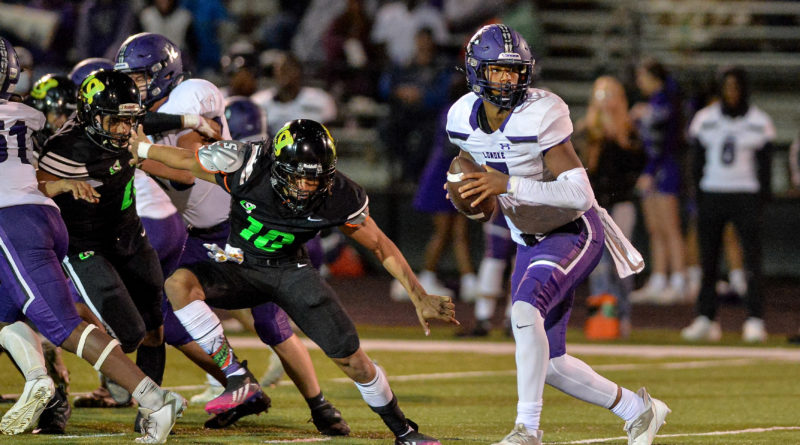 The sophomore quarterback rushed for 173 yards and three touchdowns on 21 carries and completed 7 of 14 passes for 85 yards and a touchdown in leading the Jackrabbits.

“He played really well tonight,” said Lonoke coach Harry Wright. “He’s got all the talent in the world.”

“I thought our defense played extremely well,” Wright said “They had some long runs early on, but we settled down and to get those stops on fourth down. I think they went 1-for-4 on fourth down and that was big for us.”

Spencer Pepper rushed for 48 yards on 11 carries and Chaston Dockery caught 2 passes for 69 including a 39-yard touchdown.

“It was hard because we had to re-adjust without him in there, but I was not pleased with our performance,” said Mills Coach Cortez Lee.

Lee, who saw his team get turned away on downs at the Lonoke 18 and 29 in the first half, was not happy after Mills’ first possession when the Comets punted, recovered a fumble by the Lonoke returner at the Lonoke 42, only to see the officials change their mind and have Mills re kick after an inadvertent whistle.

“That first series, we punted, they fumbled and we got the ball and their coach complains, and then they take it away from us,” Lee said. “I don’t know where I’ve seen that before, but they outplayed us the entire night.”

The Jackrabbits, on their second possession, marched from midfield to the Mills’ 18 in six plays before two incomplete passes by Allen ended the drive at the 5:05 mark of the first quarter.

After Mills was forced to punt, Lonoke needed eight plays to reach the end zone, covering 53 yards in 1:14 and culminating with Allen going up the middle from five yards out at the 1:14 mark. Tom Boatright’s kick was good, making it 7-0 Lonoke.

Mills responded with a nine-play drive, going from its 34 to the Lonoke 29 before two passes by Achilles Ringo, intended for Cody Nelson and Anton Pierce, fell incomplete.

Lonoke responded with a 12-play, 71-yard drive, highlighted by a 19- and 22-yard runs by Allen and overcame two penalties before Allen scored from five yards out at the 6:08 mark. Boatright’s kick made it 14-0.

Mills came back with an eight-play drive, marching from its 33 to the Lonoke 21 before Ringo’s pass to Nelson was incomplete on fourth and five at the 3:18 mark.

Lonoke answered with Allen handling the ball on five of six plays, including completions of 15 yards to Spencer Pepper and a 39 yard deflected pass to Chaston Dockery down the middle of the field at the 1:34 mark for the touchdown. Boatright’s kick was good, making it 21-0.

Mills got on the board with 3:15 left in the third quarter. One play after Allen fumbled the shotgun snap and was dropped for an 11-yard loss at the Lonoke 43, Daniel Brown Jr., went around the right side for a 43-yard touchdown. The two-point conversion was no good and Lonoke led 21-6.

Lonoke answered with a seven-play, 75-yard drive with Allen going 42 yards up the middle on fourth and you with eight seconds left in the third quarter. Boatright’s kick made it 28-6.

After Mills was stopped on its 44 with 9:23 left in the game, Mills marched 54 yards in nine plays — all on the ground — with Pepper scoring from five yards out at the 2:42 mark. Boatright’s kick was good, setting the final margin.

“I challenge our kids all week to get better. I want us to be peaking when we go into the playoffs.” Wright said.

Lee, whose team has suffered consecutive losses, said “I just want us to finish strong.”