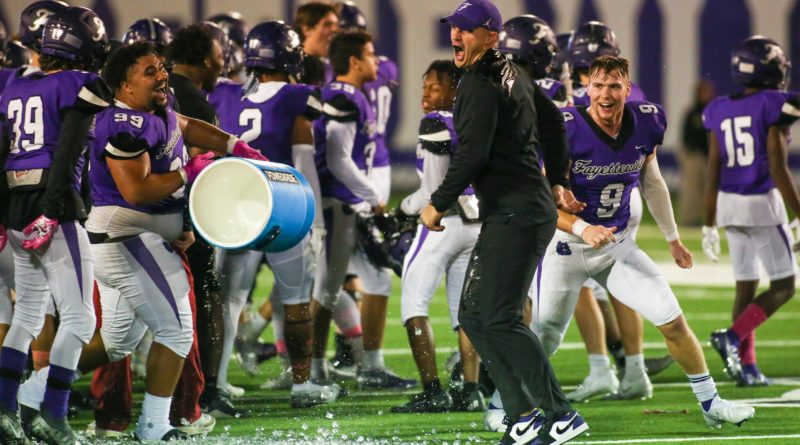 In a shootout that went back-and-forth for the majority of the game, Fayetteville (5-2, 4-0) went on a 21-0 run midway through the third quarter, keyed by senior Jaxon Taylor’s 49-yard interception return for a touchdown, to give the Bulldogs their first lead, 35-31, with six minutes to play in the third.

“The numbers didn’t like us coming in, but, at some point in time, the numbers have to change,” said Dick, now in his second season at the helm. “Our kids bought in to what we did this summer, with the work they put in, and just came out and executed.”

It was the first time in 16 years that Fayetteville had beaten Bentonville in the regular season, dating back to Nov. 4, 2005, when the Bulldogs beat the Tigers, 49-30. That streak, of course, includes all five seasons that Fayetteville ended up hoisting the state championship trophy (2007, ‘11, ‘12, ‘15, and ’16). Throughout that time, Fayetteville holds a 5-2 advantage in the playoffs.

“Oh, my gosh, it feels amazing,” said Taylor. “Bentonville had beaten us every game since I’ve been here, so just to go out there and beat them my senior year is absolutely amazing.”

Bentonville (5-2, 3-1) got off to a quick start, moving the ball 80 yards in five plays on the opening drive. Quarterback Drew Wright put the Tigers up 7-0 with a 41-yard strike to Chas Nimrod less than two minutes into the game.

The Tigers then looked to take complete control after Jackson Hutchens picked off Bladen Fike’s first pass of the game and returned it 30 yards into Fayetteville territory. Wright needed just one play to hit Cooper Smith for a 40-yard hookup to extend the lead to 14 with 8:12 still remaining in the opening quarter. Smith finished the game with six catches for 109 yards.

The Bulldogs turned it over on downs to end their second possession at the Tigers 34. But on Bentonville’s first play of the ensuing drive, the Tigers fumbled, and Taylor scooped it up and returned it to the 1-yard-line. Sophomore running back Omar Murray proceeded to blast in for Fayetteville’s first points.

Bentonville responded with a 12-play scoring drive to extend the lead to 21-7 on Josh Ficklin’s 5-yard run.

Fayetteville kept the proverbial track meet going with a 61-yard drive that ended on Fike’s 16-yard pass to Jalen Blackburn to cut the lead to 21-14 early in the second quarter.

“I talked to our guys before the game about just believing,” Dick said. “If you look back at the history of this game between these two teams, one team has usually started out fast, and the other team has to always come back. Our guys just bought in and kept playing, and it was awesome.”

Receiver Isaiah Sategna, rated as the No. 1 high school prospect in the state, did not have a catch in the first half, yet still managed to flex his muscles with a 68-yard end around touchdown run. The speedster hit the jets and simply blew past the entire Tiger defense, to tie the score at 21-21 with three minutes left in the half.

“It was a little frustrating not being able to catch any passes in the first half, but at the same time, we were still putting up points, my teammates were getting open, so I really couldn’t complain,” said Sategna, who has verbally committed to play at Oregon next year.

A 61-yard run by Ficklin allowed Bentonville to punch it in before the intermission, as quarterback Drew Wright did the honors with a 1-yard keeper to put the Tigers up 28-21.

“We made some adjustments at the half,” Dick said. “Our defensive staff is just awesome, and our players just came out and executed.”

Bentonville opened the second-half scoring with a 37-yard field goal by Liam Mulligan, before the Fayetteville began to take control.

Fike helped cut the Tigers’ lead to three when he hit Lach McKinney on a 27-yard scoring strike. Then on the third play of Bentonville’s next drive, Taylor’s Pick-6 interception swung the momentum heavily in Fayetteville’s favor.

“I just came out tonight with a personal mindset, because I didn’t play too good against them last year,” Taylor said. “I probably watched more film this week than I have in my entire life, then I just went out there and did what my coaches told me to do. It was my first time seeing the end zone since I’ve been here, so it just feels great to be able to do that, and help our team get the win.”

A 15-yard sack by Fayetteville’s Brooks Young thwarted a Bentonville drive early in the fourth quarter, while also forcing Wright from the game with an injury. That led to another Bulldog touchdown, as Fike capped off a seven-play drive with a 9-yard toss to Dylan Kittell to up the Fayetteville lead to 42-31. Fike finished 16 of 22 for 218 yards.

Bentonville added a 37-yard field goal with 1:21 remaining, but the Tigers’ onside went out of bounds, allowing Fayetteville to run out the clock.

The Bulldogs edged the Tigers in total offensive yardage, 406-405.

“That was just an outstanding high school football game, and our guys just played their tails off,” Dick said. “This was just a great night for all of our staff, all of our kids, the fans, and just all of Fayetteville High School. This game just builds our confidence even more.”

Fayetteville will travel to play Springdale High next Friday, while Bentonville travels to face Rogers High.