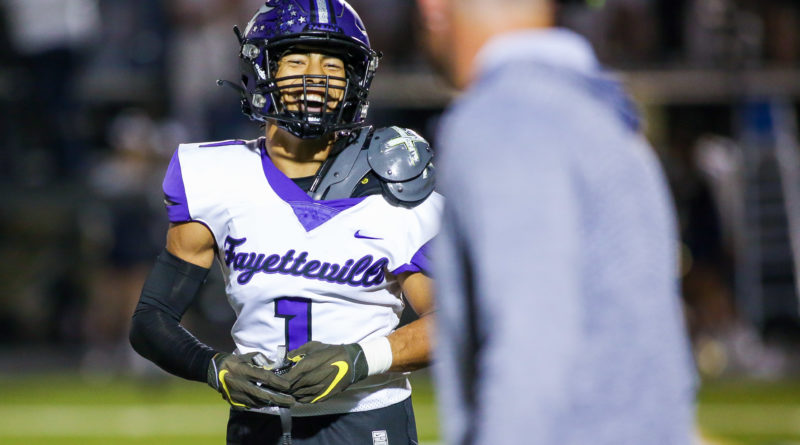 The Week 7 slate is headlined by Fayetteville and 7A-West Conference power Bentonville meeting to decide the conference title and Conway looking for its third straight win over an SBLive Arkansas Top 25 team when it travels to Fort Smith Northside.

Below are the Top 10 games to watch in Arkansas this week.

The Wampus Cats, the No. 2 team in the SBLive Top 25 power rankings and winners of five straight games, roll over to Fort Smith to play the No. 12-ranked Grizzlies in a showdown with conference title implications.

Northside, with a conference-opening loss to Bryant, has slim hopes of a league title but could be in the mix if it wins out but still must play Cabot and North Little Rock after Friday night’s tilt.

Conway, on the other hand, has already blitzed conference title contenders North Little Rock and Cabot in successive weeks and with a road win Friday wouldn’t be tested again until the regular-season finale at Bryant.

Conway is explosive offensively with sophomore quarterback Donovyn Omolo coming into his own and senior wide receiver Manny Smith, who lit up Cabot for nearly 150 yards receiving, and running back Boogie Carr, who ran for more than 100 yards last week.

The Grizzlies like to keep the ball on the ground with the one-two punch of senior running backs Sundquist Church and Ty Massey.

Conway’s defense is plus-21 in turnover margin and had little trouble limiting North Little Rock and Cabot.

Nettleton is one of the state’s surprise teams, owning a 6-0 record and a real chance at winning a 5A-East Conference championship with games against rival Valley View and powerhouse Wynne remaining the final two weeks of the season.

Nettleton senior quarterback Cameron Scarlett is one of the most underrated signal-callers in the state and can hurt defenses with his arm and feet. Classmate Koby Bradley is a force at running back, churning out three first-half touchdowns last week in a 49-0 win at Paragould.

Nettleton has won 8 of the past 13 meetings, but the Eagles pulled out a 28-21 win in 2020. GCT is trying to stay in the playoff hunt after losing a 17-14 heartbreaker to Brookland last week.

The Tigers roll into Fayetteville on a 35-game conference winning streak and with a win will be in line to capture their 15th 7A-West Conference crown in 16 seasons.

No. 5 Bentoville hasn’t lost since Week 1, when Conway forced six turnovers to win a week after the Wampus Cats lost to Fayetteville.

The Purple Dogs feature one of the most potent passing games in the state with senior quarterback Bladen Fike, who is the state’s leading passer, and classmate receiver Isaiah Sategna, a University of Oregon commit. Sategna has gone over 200 yards in a game receiving twice this season and totaled 198 last week.

Tigers junior running back Josh Ficklin is becoming one of the best backs in the state. Senior baseball standout Drew Wright has become a capable trigger man for the offense and connects regularly with University of Tennessee wideout commit Chas Nimrod.

This should be a good game, and you won’t find a better collection of Division I talent on an Arkansas prep football field this season.

The winner of this game will have a leg up in the 6-3A Conference title race. The Wildcats have reeled off five wins in a row after losing to bitter rival Fordyce in the opener and are 3-0 in league play. Junior running back Isaac Gray leads a formidable rushing attack, totaling 201 yards on the ground in a 62-26 blowout of Smackover last week, and sophomore Treyvione Wainwright (31-yard TD last week) also contributes.

Sophomore QB Owen Morrison orchestrates the offense and completed 2 of his 3 passes for TDs last week for 31 and 51 yards.

McGehee (6-0, 3-0) is potent offensively with senior quarterback Sam Polite at the controls. He ran for 74 yards and a touchdown in a 36-12 win against Camden Harmony Grove last week. Polite threw only three passes but all went for TDs to classmate A.J. Jordan. Senior running back Jody Easter leads the rushing attack and totaled 92 yards and a touchdown last week.

This could be a bit of a trap game for the No. 10 Panthers, winners of five straight. After overcoming a fourth-quarter deficit to beat Parkview last week, 30-23, Benton makes the long drive north to face an improving Bombers club. Mountain Home lost some close games early but hammered a short-handed Van Buren team 40-15 last week.

The Bombers’ defense forced four turnovers and held the Pointers to -31 yards rushing.

Benton offers a much stiffer test, though, with senior quarterback Stran Smith, who has become one of the best signal-callers in the state, and classmate wide receiver Cameron Harris, who holds Division I offers in football and basketball. The running back duo of senior Casey Johnson and junior Brandon Johnson has also proven to be lethal for opposing defenses.

The Panthers defense has also been salty during this five-game run, giving up just over 17 points per game, and limited the Patriots offense, including an interception on the final drive of the game, but gave up 16 points on special teams miscues.

Ultra-talented El Dorado still has a chance to earn the 6A-East Conference title despite a road loss to conference leader Jonesboro the opening week of the conference season. Marion still hopes for at least a No. 2 or No. 3 playoff seed.

The Patriots ride standout senior running back Cam Anderson, who ran for 227 yards and two touchdowns in a 37-25 win against Searcy last week.

Just a few weeks ago, the Goblins looked like one of the best teams in Class 5A, but a narrow loss to Farmington and then a 45-21 loss to Greenbrier last week has Harrison reeling.

They have no time to wallow in the misery as they travel to No. 19 Vilonia, which is surprisingly 6-0.

The Eagles, who haven’t won a conference title since 2003, ride the arm of Division I quarterback prospect Austin Myers. Myers has passed for 12 touchdowns in just the past two weeks, and he was 22 for 25 for 319 yards in a 35-0 whipping at Pear Ridge last week. Classmate Kannon Bartlett totaled 201 yards receiving and three touchdowns in the win.

The Goblins racked up more than 300 yards in the loss last week but committed three turnovers. If they can clean up the mistakes, Harrison, winner of three straight conference titles, is capable of handing the Eagles their first loss.

Both of these teams are surprises and looked to be on a collision course to tangle in an undefeated showdown Friday, but both squads were knocked off last week — Lonoke in overtime by Southside and Mills by Clinton.

Still, the Jackrabbits and Comets have plenty to play for with the 2-4A title still up for grabs, and both teams still have a matchup with league-leading Stuttgart remaining.

Mills junior running back Jebrae Shaw has helped ignite the Mills resurgence. An all-conference quarterback at Watson Chapel a season ago, he has already eclipsed the 1,000-yard mark for Mills lining up at running back.

Sophomore Achiles Ringo, who saw playing time last year as a freshman late in the season, has also starred for Mills.

Mills must shore up its defense, which gave up 475 rushing yards last week.

Mena tries to take a step to securing its second straight 4-4A Conference title with a win. Last fall, the Bearcats converted on a Hail Mary at the horn to defeat the Hillbillies and won their first conference title in 24 years.

Mena has outscored conference opponents the past three weeks 123-51. A blowout win against Dover last week was fueled by senior Austin Rose’s three TD passes. Classmate Jaden Felix ran for 73 yards and a score in the win.

The Hillbillies’ offense is also surging with wins over Dardanelle and Dover the past two weeks by a combined 97-31. Senior QB Landon Wright, who was 4 for 5 passing for 86 yards and two TDs in the first half last week, has totaled 322 yards and four touchdowns passing and 309 yards and three scores rushing.

Ozark had a bye last week.

This interesting nonconference matchup in the middle of the season pits one of Class 2A’s juggernauts against a 4A program which includes a nearly 300-mile roundtrip bus ride for the Redbugs.

The two-time defending champions are on pace for another conference title after ripping rival Junction City 42-6 last Friday.

Fordyce welcomed back senior quarterback/linebacker Trey Merritt, who injured his ankle in Week Zero in a win against rival Rison. Merritt hasn’t played since but contributed six tackles, including three for loss, in the win against the Dragons. He will be counted on heavily against the Sand Lizards.

Dardanelle is led by junior quarterback Drew Vega, who hit Logan Crowe on a touchdown pass with eight seconds left to beat Pottsville 27-24 last week. Vegan also ran for two touchdowns and passed for another.