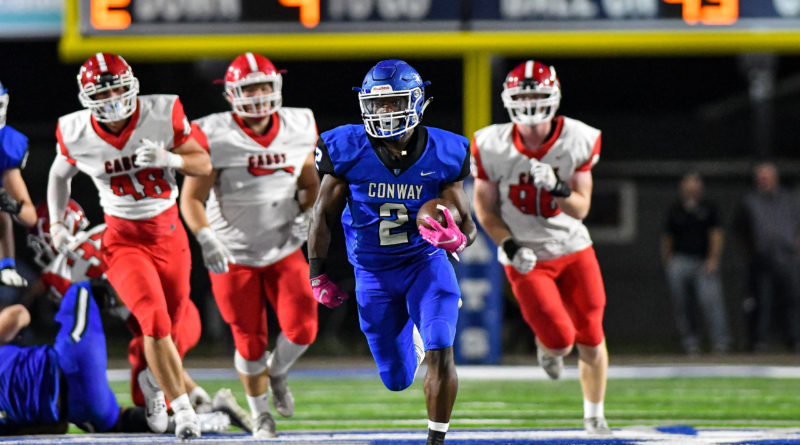 The Hornets will be heavily favored again this week against Little Rock Southwest, which hasn’t won a game on the field in two seasons of existence, and then begin a three-week stretch against teams contending for the 7A-Central Conference crown.

The Charging Wildcats righted the ship against Little Rock Southwest last Friday and now get winless Little Rock Catholic to feast on.

The Panthers never got going in their showdown at Conway but get a break this week at winless Little Rock Central.

The Tigers have played all of their big games at home this season until this week, when they make the quick trip down I-49 to face No. 8 Fayetteville, most likely for the 7A-West Conference title.

After taking care of Prairie Grove, the one team that might have had a shot at competing with them, 42-14, the Saints can probably name their score the final four games of the regular season.

White Hall challenged the Bruins for a half; now the tough task of facing another stout defense on the road with Maumelle on Friday night.

Since the offseason, pundits have proclaimed the Bulldogs a comeback team for 2021, and they can prove it this week with a win against No. 5 Bentonville and take a step toward sealing the 7A-West Conference title.

The Wolves will be heavily favored the next two weeks at Siloam Springs and at home against Van Buren, respectively, but end the season with 6A-West title contenders Benton (home) and Greenwood (road).

The Panthers make the long trip to face improving Mountain Home this week and then have a showdown at home with Greenwood next week.

The Hurricane sit atop the 6A-East and will enjoy a third straight game against the lesser competition of the league with West Memphis before taking a step back up with a game at Searcy next week.

The Grizzlies look for an upset of No. 2 Conway when the Wampus Cats visit Fort Smith on Friday night.

The Warriors enjoy a bye this week to prepare for a showdown at rival Pulaski Academy next week.

The Patriots went 1-2 against 6A-West heavyweights, including at Lake Hamilton and Benton, and now enjoy the softer part of the conference slate.

A game at improving Russellville is dangerous with a showdown at Benton lurking next week.

Normally, playing at rival Batesville would be a marquee game, but with the Pioneers enduring a tough season, the Yellowjackets most likely won’t be tested in 5A-East Conference play until a regular-season finale at Nettleton.

The Bulldogs travel just down the road to rival Watson Chapel and should get back on the winning track with a tougher league game against Maumelle next week.

The Wildcats will be favored to take care of Marion this week, but a game at Sylvan Hills, which is undefeated in 6A-East Conference play, is waiting next week.

The home game with Harrison on Friday loomed much larger before Top 25 newcomer Greenbrier blasted the Goblins last week.

The Cardinals travel to Clarksville this week with a showdown with No. 21 Greenbrier looming next week.

The Panthers make their Top 25 debut after staying perfect with a surprising 45-21 blowout at previously ranked Harrison last week.

After a loss to Maumelle in the season opener, the Bears have won five straight. After a tilt with conference bottom dweller Sheridan this week, they will play conference contenders El Dorado and Jonesboro back-to-back.

The Lumberjacks have played the meat of the 8-4A Conference schedule and should cruise to the conference title with the only slight challenge maybe a home game with Monticello next week.

The Senators go for their sixth straight win at Malvern on Friday.

The Ricebirds should be leery of Clinton (3-3) after it knocked off previously unbeaten Mills last Friday.