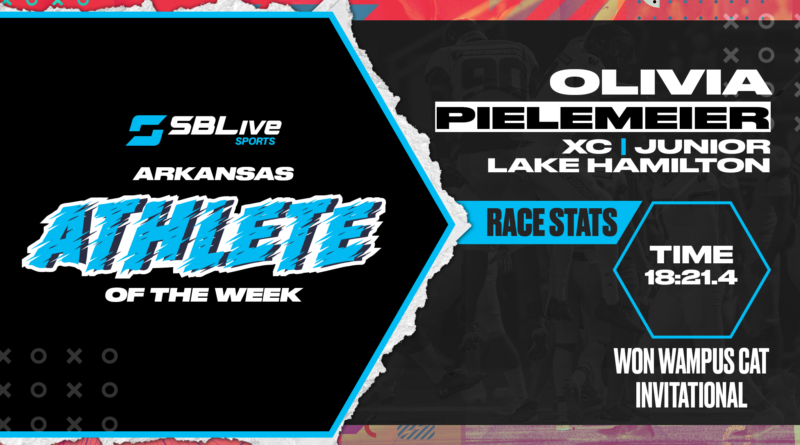 The junior won the Wampus Cat Invitational in Conway in 18:21.4.

Pielemeier received 44.94% of the vote, beating out Greenwood’s Paige Andrews who finished second with 18.49%. El Dorado’s Kamron Bibby finished third with 17.69% and Pulaski Academy’s Anna Kate Nichols finished fourth with 12.52%. There were over 226,000 votes tallied this week!

Kilcrease won the Class 6A state title by shooting a 136 over the 36-hole tournament, including a 64 in the final round at the Lost Springs Golf & Athletic Club in Rogers.

Garcia won the Wampus Cat Invitational in Conway in 15:57.9.

Nichols won the Class 4A state title by shooting a 67 at Sage Meadows Country Club in Jonesboro.

Hester won the Class 5A state title by shooting a 76 at Glenwood Country Club.

Dew finished 22nd and was the highest-finishing Arkansan at the Chile Pepper Festival Callente Division in Fayetteville in 15:43.80.

Galindo finished 16th and was the highest-finishing Arkansan at the Chile Pepper Festival Callente Division in Fayetteville in 18:44.80.

Cain won the Class 3A state title at Glenwood Country Club with a 76, helping the Lady Lions win their fourth consecutive state title.

Dunsworth won the Cabin Creek Run in Lamar in 18:33.90 and finished seventh and was the top Arkansan in the Chile Pepper Open Division in Fayetteville in 17:14.40.

Andrews finished second and was the highest-finishing Arkansan at the Chile Pepper Festival open division in Fayetteville in 20:35.60.

The senior ran for 221 yards and 5 touchdowns in the Cobras’ 54-21 victory over Nashville.

Sanchez won the Scrapper invitational in Nashville in 18:17.11.

The senior threw 6 touchdown passes and 260 yards  in the first half in the Bulldogs’ 48-13 rout over Rogers.

Webb won the Class 2A state title by shooting an 83 at Turkey Mountain Golf Course in Horseshoe Bend.