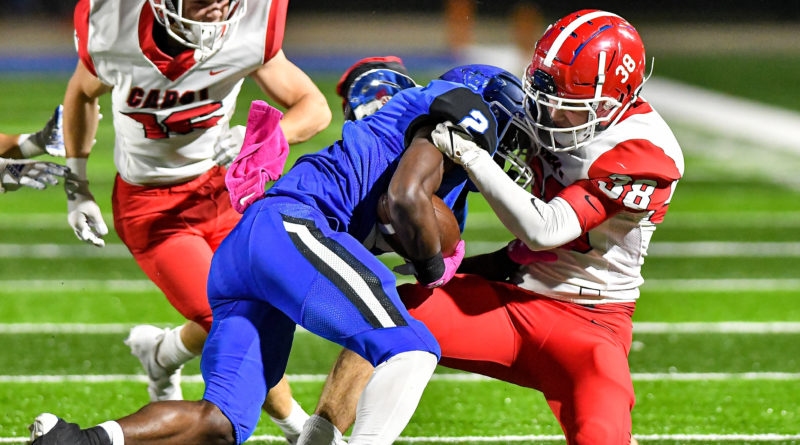 Here is how the Top 25 teams in Arkansas fared this week.

The Hornets have won three straight games easily since falling to Longview, Texas, the final game of the nonconference season.

The Panthers found themselves in unfamiliar territory down big in the first half as they have led at halftime of all five of their wins this season.

For the second week in a row, the Wampus Cats, who racked up 574 yards of offense, bury a league frontrunner. They now await a showdown with Bryant in a few weeks in the regular-season finale.

The Charging Wildcats have a get-well game after a crushing loss to Conway last week.

The Tigers prepare for their biggest challenge of the season next week playing at Fayetteville, which is also unbeaten in 7A-West play.

Amazingly, a 28-point loss will be the closest any 1-4A Conference team comes to the Saints.

The Bruins outscore the Bulldogs 42-7 in the second half against a defensive unit that had given up 23 points all season.

The Bulldogs are 3-0 in the 7A-West and can take control of the league with a win in a home showdown with Bentonville next week.

The Wolves might have experienced a hangover after a big win against Little Rock Parkview last week, as they trailed the Cyclones but rebounded to escape with the win.

The Panthers hold on despite letting the Patriots back in the game by committing three special teams gaffes in the third quarter — giving up a safety on a punt, a free kick touchdown return and a touchdown on a fake punt.

The Hurricane move to 3-0 in 6A-East Conference play after finishing a tough nonconference slate 1-2.

The Grizzlies turn in back-to-back wins after opening the conference season with a home loss to Bryant.

The Patriots’ drive that could have tied the score late ended on an interception in the end zone.

The Bulldogs have rebounded from a conference-opening loss to Parkview and are lurking with a chance to still win a conference title.

The Bulldogs were tied with PA 21-21 at halftime but couldn’t contain the Bruins’ high-octane offense in the second half.

The Warriors bounce back from their first loss last week to trounce the Badgers and score more points this week than they had the previous two weeks combined.

The Yellowjackets pass a big test to take a step closer to the 5A-East Conference championship.

The Wildcats have scored 108 points the past two weeks in lopsided wins.

The Wolverines can’t ride the momentum of a 40-0 win against Springdale last week.

The Eagles look to be on a collision course with Greenbrier for a 5A-West Conference title.

The Cardinals get back on track after their first loss of the year last week with the shutout of the Devil Dogs.

One of the shockers of the night was the Goblins falling behind 45-0 at Crooked Creek, all but ending any chance of winning a conference title.

The Lumberjacks blew open a close game to once again go over the 50-point mark.

Are the Senators the team that can go score for score with Shiloh Christian?

For the second straight week, the Ricebirds are not tested after a tussle in 2-4A Conference opener against Batesville Southside.