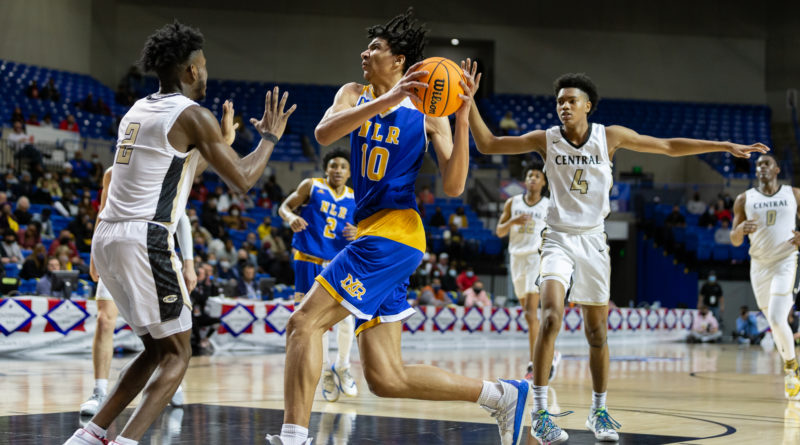 Smith, who has played the past two seasons at Sylvan Hills, received scholarship offers from some of the major programs in the country before narrowing his choices to Arkansas, Alabama, Auburn and the University of Arkansas at Pine Bluff.

He chose Arkansas much to the delight of a crowd estimated at around 300 supporters gathered at a local fitness club in west Little Rock.

And while Smith, the No. 6-ranked prospect according to ESPN, is the highest-rated recruit in Arkansas, he isn’t the only one making the state stand out amongst the crowd. Oregon commit and Smith’s teammate at North Little Rock, Kel’el Ware, is ranked No. 39 by ESPN. Magnolia’s Derrian Ford is 68th and Morrilton’s Joseph Pinion is 93rd — two of Smith’s future teammates at Arkansas.

That’s not bad for a small, rural state. It’s even better when you consider that Arkansas natives and former Hogs Bobby Portis, Isaiah Joe and Moses Moody are currently on NBA rosters, and Portis played a significant role in the Milwaukee Bucks’ NBA title run.

North Little Rock native Moody, who was ranked No. 45 by ESPN in the class of 2020, was taken No. 14 in the 2021 NBA draft after just one year at Arkansas — a trend that Smith, Ford and Pinion, no doubt, would love to repeat. Moody is the only Hogs one-and-done player in school history and just the second in the state, after Bentonville alum Malik Monk was taken No. 11 in the 2017 NBA draft by Charlotte after one season at Kentucky.

Moody’s former teammates at Arkansas also dominated the ESPN’s Top 100 in 2020. K.K. Robinson attended Bryant until moving to prep school as a senior, and he was ranked No. 83. Jacksonville’s Davonte Davis, who will be counted on to lead the Hogs after a monster NCAA Tournament performance, was 89th in the class, and Hogs big man Jaylin Williams, a Fort Smith Northside alum, was 94th.

That doesn’t count all of the other Division I players who either signed in 2020 or will sign in 2022. Or former Little Rock Central guard Bryson Warren, who announced he was transferring to a prep school in Branson, Mo., only to later decide to sign with Overtime Elite, a new professional league for players not yet eligible for the NBA. Warren would have likely been near the top of the 2023 ESPN rankings.

The point is, Arkansas is producing some big-time basketball talent consistently. There have been flashes. In the 1990s, Little Rock Parkview was loaded with talent, including future NBA players Derek Fisher and Quincy Lewis. And from a Razorback perspective, Russellville’s Corliss Williamson was one of the top players in the country when he signed with the Hogs in 1992, as was Little Rock Central’s Joe Johnson when he signed in 1999. Both went on to enjoy long NBA careers.

All of those events led to the current state of hoops where those kinds of players are being developed every year. Right now, a sixth-grader in Little Rock is trying to be a little better than Smith and in a small Delta town, a junior high schooler is looking to carry his team to a state title and national recognition like Ford has done at Magnolia.

The work ethic of players such as Warren and Smith’s early-morning extra workouts and Ford’s weight room work ethic isn’t going unnoticed by younger players, who will continue this trend.

After some hits and misses, it looks like basketball recruiting will stay hot for two main reasons. One, the Little Rock metro area is officially a basketball Mecca. While football once reigned supreme in the Little Rock School District, only Little Rock Parkview is enjoying a measure of football success currently. The rest of the LRSD programs are struggling, and Little Rock Hall moved to eight-man football because of low numbers. Kids growing up in Little Rock dream of playing basketball now.

The second is the Hogs. As the influx of talent has grown, third-year Arkansas coach Eric Musselman has used that to his advantage and engineered an Elite 8 run on The Hill last season. The more Arkansas wins, the more in-state players are going to want to develop and play in Fayetteville.

Jonesboro coach Wes Swift has coached prep basketball in Arkansas for 28 years and has won six state championships, including four at Jonesboro during his current 13-year stint at the school. He also has been actively involved with AAU basketball and has a good pulse on the talent pool statewide.

He said that with Warren leaving high school after his sophomore season, the 2023 class in Arkansas won’t be star-studded, but the ’24 class will receive ESPN Top 100 recognition.

“I think it has been moving in that direction for the last decade with the rise of social media with getting the names out there,” Swift said. “There are a bunch of people trying to promote (basketball in Arkansas). I get calls from coaches all the time telling me how under-recruited the state is. They are calling checking on if this kid or that kid is getting recruited by other schools.”

Swift, who is active in the Arkansas Basketball Coaches’ Association, said major college coaches such as UConn women’s coach Geno Auriemma in the past and Oklahoma’s Porter Moser and Texas’ Chris Beard this year appear at the organization’s annual coaches’ clinic for free because they want to establish relationships with Arkansas prep coaches and tap into the talent pool.

Swift also said top Arkansas AAU programs such as the Arkansas Wings, Arkansas Hawks and The Woodz Elite have raised the state’s basketball profile over the past 20 years.

Smith’s commitment last week is a sign of things to come. The state’s prep basketball scene is as prominent as it has ever been, and in the next decade Arkansas talent is going to make a major impact on major college basketball and the NBA.