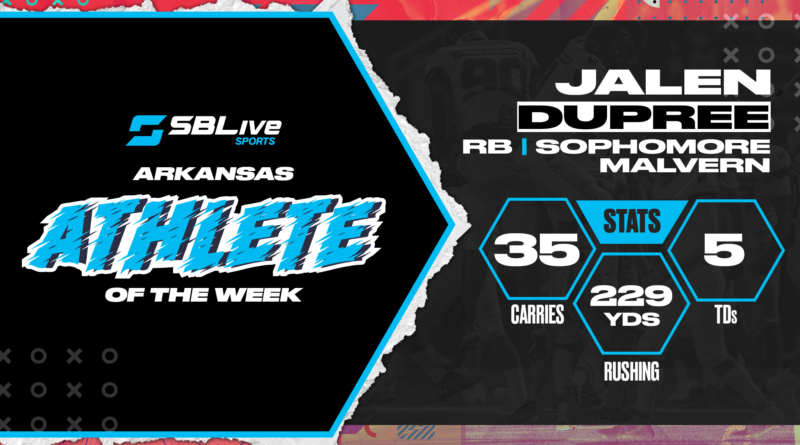 Congratulations to Malvern running back Jalen Dupree for being voted SBLive’s Arkansas High School Athlete of the Week for Sep. 20-26!

The sophomore rushed for 229 yards and 35 carries and scored five touchdowns in a 40-20 victory over Bauxite.

Webb earned medalist honors in the 5A-West girls golf tournament at Greystone Country Club in Cabot with a 75.

Westphal finished fourth and was the highest-finishing Arkansan at the Frank Horton Invitational in Memphis in 15:48.70.

The senior Arkansas Razorbacks commit had 33 carries for 268 yards, averaging 8.1 yards per carry, and 5 touchdowns, in the Patriots’ 48-28 win over Greenwood on Thursday night.

Pielemeier won the Class 5A division at the Cyclone Invitational in Russellville in 19:05.2.

Elia won the 5A-South Conference tournament with a 69 at Glenwood Country Club.

Both players shared medalist honors at the 5A-South Conference tournament with a 76 at Glenwood Country Club.

Drew won the Lakeside Rams Invitational in Hot Springs in 15:54.00.

Johnson rushed for 245 yards and 6 touchdowns in 24 carries in a 41-3 victory over Sheridan.

Chambers earned medalist honors in the 5A-West boys golf tournament with a 68.

Rittenburg finished fifth and was the highest-finishing Arkansan in the Frank Horton Invitational in Memphis in 19:15.9.

Reilley earned medalist honors with a 78 in the Class 1A District 2 Tournament at The Course on Turkey Mountain in Horseshoe Bend.

Rodgers won the Class 1A-4A division at the Cyclone Invitational in Russellville in 19:19.3.

McCain won the Class 5A division of the Cyclone Invitational in Russellville in 16:15.5.

Eslick won the University of the Ozarks Invitational in 16:09.90.

Swindle won the Class 6A division at the Cyclone Invitational in Russellville in 19:30.0.

Ranier scored five touchdowns Friday night in a 61-41 victory over Pocahontas. He caught 6 passes for 144 yards and 3 touchdowns. He ran for another touchdown returned a kickoff 89 yards for a touchdown.