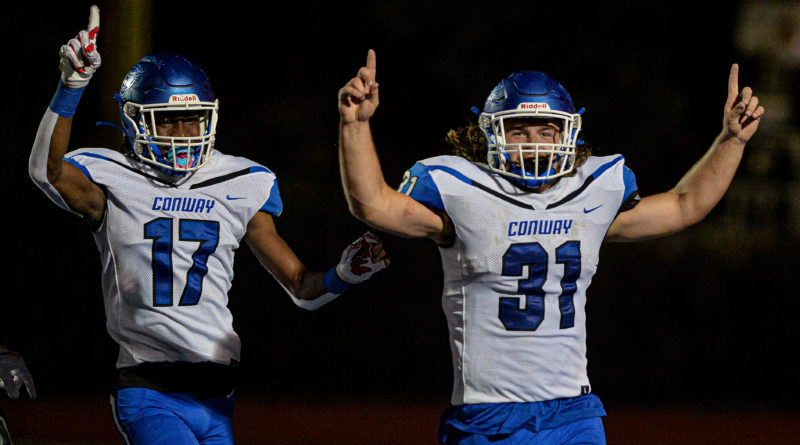 NORTH LITTLE ROCK — The matchup between the No. 2 and No. 4 teams in SBLive’s Arkansas rankings quickly turned into a mismatch.

“Anytime you can come on the road and get a win like this, that’s special,” said Conway coach Keith Fimple. “Our kids were prepared and made some big plays.”

North Little Rock coach Randy Sandefur took the blame for his team’s loss: “You can put the blame on me for this one. I didn’t have them well prepared.

“Even before the turnovers, it seemed like they punched us in the face, and we didn’t respond. I saw the look in their eyes, and that was disturbing.”

North Little Rock’s Malachi Gober completed 17-of-33 passes for 176 yards and was intercepted twice. He also was held to 28 yards on 8 rushes and fumbled twice. Torrance Moore led the Charging Wildcats with 48 yards rushing on 15 carries. North Little Rock had 285 yards in total offense and 22 first downs, but were done  in by the turnovers and 5 penalties for 50 yards.

The Charging Wildcats’ first drive of the game set the tone as they marched from their 22 to its 44 in seven plays before Trey Roberts intercepted Gober on a tipped pass.

From there, the Wampus Cats, using a no-huddle offense, marched 58 yards in 8 plays with Omolo throwing 11 yards to Boudreaux in the end zone at the 6:45 mark. Adrian Mejia’s extra point was good and the Wampus Cats led 7-0.

North Little Rock came back with its best drive of the half, marching from its 24 to the Conway 4 before a false start penalty pushed them back five yards. After Gober was stopped following a five-yard gain, Devin Jackson came on for a 21-yard field goal at the 37.1 second mark to get the Charging Wildcats to 7-3.

Conway responded with a 64-yard drive in eight plays with Carr handling the ball on the last three plays, including an 8-yard touchdown at the 10:50 mark of the second quarter. Mejia’s kick was good and the Wampus Cats led 14-3.

“Boogie’s been such a good player for us the past two years, and he had some great blocking tonight,” Fimple said.

After an exchange of punts, Gober was intercepted by Garrett Sanders who ran it back 25 arounds around the left side at the 6:53 mark. Mejia’s kick was good, making it 21-3

North Little Rock appeared to regain some momentum, reaching the Conway 7 in five plays before Gober was hit hard and missed two plays. His backup, Davian Vayson, fumbled the snap and lost 11 yards on the play. One play later, Gober came back, ran to the left side and fumbled.

After a 67-yard run by Carr gave the Wampus Cats the ball at the North Little Rock 15, two plays later, Omolo threw 11 yards to Manny Smith on the left side at the 1:50 mark. Mejia’s kick was good and Conway led 28-3.

Mejia added a 28-yard field goal with 6:04 left in the game which set the Arkansas Activities Association’s running clock into motion. Gober scored on a 10-yard run with 39.9 seconds left to set the final margin.

“In this conference, you like to defend your home and steal one on the road and this is a big conference win tonight. There are no off weeks in the 7A-Central,” Fimple said.

“Let’s give a lot of credit to Conway. Hopefully, we’ll meet up again in the playoffs. They didn’t do anything we didn’t expect. We just weren’t ready to respond.”