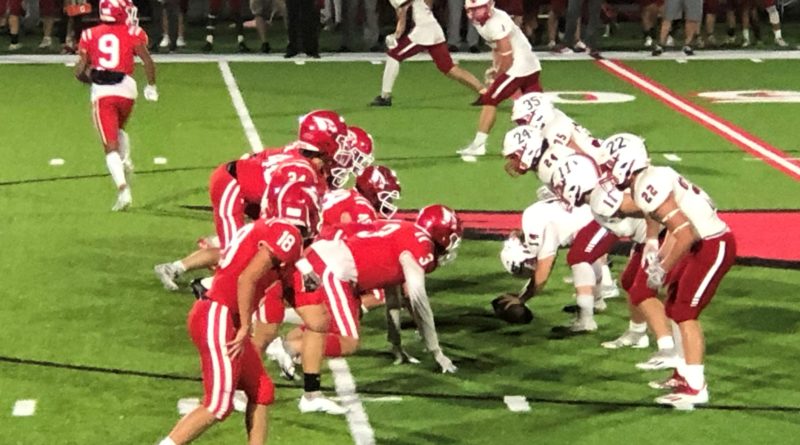 The impact of the contest loomed large for conference supremacy as both teams entered undefeated. But the Eagles crashed the party early, rolling out to a 21-0 first-quarter lead, en route to an emphatic 57-28 victory.

“Fortunately, I am surrounded by a great team around me, so I just had to get those guys the ball,” Myers said. “My line gave me all the time I needed, and we were just able to take what they were giving us and make some plays. But my teammates deserve the credit.”

Farmington sophomore quarterback Cameron Vanzant held his own, with 410 yards and three touchdowns through the air, completing 29 of 45 passes. But the Cardinals were held to zero yards rushing on 21 carries. They were out-gained 622-410 in total yardage.

“Their quarterback is really able to extend plays, and they threw some shots on us that we couldn’t handle,” Vilonia coach Todd Langrell said. “Farmington is an up-and-coming program, and Coach (J.R.) Eldridge has his guys coming together.”

The Eagles opened the game with a 10-play, 75-yard drive that ended with a Myers 27-yard pass over the middle to Jack Vines.

After Farmington turned the ball over on downs at the Vilonia 23, the Eagles engineered an 11-play drive that was capped by a 5-yard scoring strike to Jamison Hinsley, who finished with 13 catches for 212 yards.

When the Cardinals were forced to punt after a three-play possession, the Eagles took immediate advantage, as Kannon Bartlett took a swing pass from Myers and broke loose down the right sideline for a 72-yard TD that gave Vilonia a 21-0 lead with 44 seconds remaining in the opening stanza. Bartlett had 10 catches in the contest for 184 yards and three TDs.

“Our team has the capability of being explosive, then if people play soft on us, we have the capabilities to throw some hitches – and we did that at times tonight,” Langrell said. “And our skill guys are able to take some of those for 60-plus yards.”

After the Eagles went up 28-0 on another Bartlett touchdown catch and run, Farmington finally got on the board when Vanzant connected with Lawson Devault, who outjumped the Eagle defenders in the end zone. The extra point attempt failed, but the Cardinals were able to get the ball back, allowing Luis Zavala to boot a 32-yard field goal as the half ended, to cut the lead to 28-9.

The teams exchanged touchdown passes early in the third quarter, as Myers hit Seth Kirk from 31-yards out, then Vanzant hooked up with Peyton Funk on a 38-yard score.

Vanzant hit Funk again, when the speedy receiver beat the defense over the top for a 48-yard touchdown with 4:57 remaining in the third quarter, to make it 35-22.

Myers then threw touchdowns on two of the next three drives to put the game away, hitting Bartlett — who cut back three times through the Farmington defense for a 47-yard jaunt – then finding Kirk once again on a 28-yard route down the left sideline.

Farmington added a late touchdown on a 1-yard Myles Harvey run. Then Kirk finished things off for Vilonia with a 52-yard run to paydirt.

“It’s just a great team win for us, because our defense played well and our offense did what we needed them to do all night long,” Langrell said. “I can’t say enough about Austin (Myers) and the job he did, but the offensive line did an outstanding job of protection to give him the time to throw.”