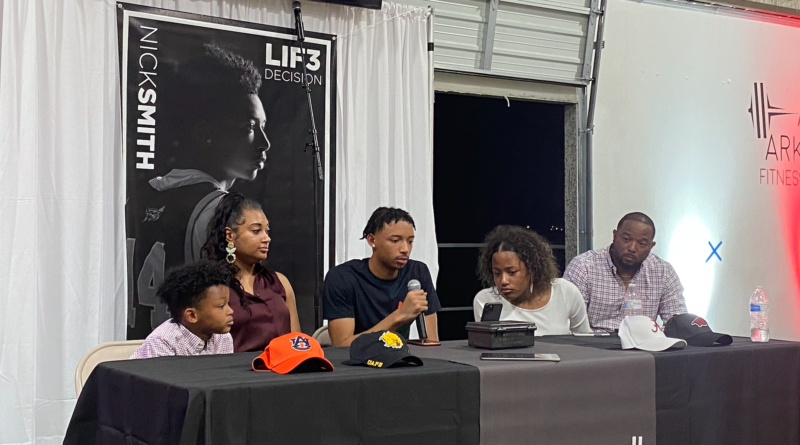 Smith, 6-5, 185 pounds, and the No. 6-ranked player in ESPN’s 2022 Top 100, gave an oral commitment to Arkansas at the Arkansas Fitness Athletic Center, which was broadcast on Instagram Live with Paul Biancardi, the national recruiting director for ESPN, conducting the streaming interview. The Arkansas Fitness Athletic Center is where former Razorback Moses Moody, who was taken 14th overall by the Golden State Warriors in the 2021 NBA Draft, made his announcement.

Smith had Arkansas among his final four which included SEC rivals Auburn and Arkansas and in-state school Arkansas-Pine Bluff.

Smith becomes the highest-ranked player in the 12-year history of ESPN’s database to sign with the Razorbacks.

Smith averaged 21.3 points, 3 rebounds and 3 steals per game as a sophomore for Sylvan Hills, and he averaged 25 points, 5 rebounds and 4 assists as a junior.

Smith led the Brad Beal Elite AAU team to a 6-2 record and the finals of Peach Jam while averaging 18.6 points, 3 rebounds and 3 assists per game.

At 8:04 p.m., Smith, sitting at a table with family members, pulled out a cardinal and white hat from underneath the table that said Pigs on it and said he planned on going to college at Arkansas. At that point, the crowd at the Arkansas Fitness Athletic Center, estimated about 300 people, started calling the Hogs.

When asked by Biancardi why he chose Arkansas, Smith cited the system by third-year coach Eric Musselman, the fact Musselman had been in the NBA for nine years with five teams and was the head coach of the Warriors for two years and one year with Sacramento, and a relationship the two established since Smith’s sophomore year.

“When I went up there, I liked the culture and liked what Coach Musselman is trying to do,” Smith said. “He has a lot of NBA experience and he kept talking about that.”

It didn’t hurt that Musselman, in his second year at Arkansas, led the Razorbacks to a 25-7 record and a trip to the NCAA Elite Eight before losing to eventual national champion Baylor.

“If you know Coach Muss, he is a competitor and he doesn’t like to lose,” Smith said. “The season they had was a big deal.”

Smith also said Musselman made a home visit recently and Smith told him to save the No. 3 jersey for him. Musselman, according to Smith, must have hugged him about 12 times.

While Moody did use the Arkansas Fitness Athletic Center two years ago to make his announcement, Smith said the big reason for using it was he established a relationship with the people there and that other places had COVID-19 restrictions in place when it came to the number of people they could have in the building.

“I didn’t know how many people would be able to come out,” Smith said.

“My expectations are to go in there and win,” Smith said.

Having made his college decision, Smith said he’s glad to put that behind him.

“There was one word and that’s stressful,” Smith said. “It took a lot of time away from me and my family.

“I learned a lot about making big decisions and making decisions that seem right for me and my family.”

Smith said he hopes to persuade Walsh and Black to join him in Fayetteville.