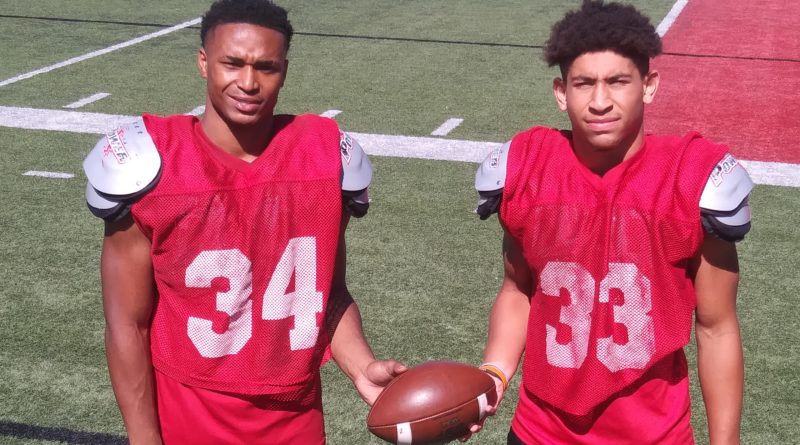 FORT SMITH — Near the end of last season, Northside football coach Mike Falleur had the luxury of having three running backs at his disposal.

But in the offseason, Falleur decided to let two of those backs — seniors Ty Massey and Sundquist Church — carry the load while moving the third, fellow senior Seth Fields, to defense full time, playing linebacker.

“We’ve been doing this ever since we were young, so just getting the opportunity for us to play with one another, it’s always great, it’s just second nature,” Church said.

Thus far, Falleur’s gamble is paying off, as Massey and Church have evolved into a potent duo carrying the Grizzlies’ ground game. The two have accounted for 91 percent of Northside’s 1,025 rushing yards through the team’s first three games.

“It was great, because me and Sundquist, we had always grown up playing football together, so I just feel like it was normal to us,” Massey said. “We know what we need to do, we know how to do it and just help each other out.”

Both Massey and Church added they haven’t been surprised by their contributions to Northside’s ground game.

“I feel like our (offensive) linemen have been helping us out really good,” Massey said. “They want to run the ball and they want to help us out as much as they can.

“They just come out and work every practice and just try to help us and just do their jobs.”

The two made an instant impact in Northside’s season opener Aug. 26 against crosstown rival Southside. Both carried the ball 22 times, with Church gaining 137 yards and Massey 124, as the Grizzlies pulled away in the second half for a 31-16 win.

They kept it going two weeks later against defending 6A state champion Greenwood, as the two combined to rush for 295 yards, with Massey adding two touchdowns, in the Grizzlies’ 29-20 win.

Last week, as Northside clawed back from a 20-7 first-quarter deficit, they ended up rushing for 450 yards.

“It starts in practice,” Church said. “The level of focus and maturity of getting ready for the game, it starts Monday and not the day we actually play, so I feel like we did a pretty good job of locking in and all coming together understanding we have one goal and once we understood that, we had a great outcome.”

Massey showed glimpses of his talent as a junior, as he rushed for nearly 1,000 yards.

“I’m more like a physical, downhill, try to create space type of back,” he said. “I just try to find the holes and accelerate, and just run over people.

“I wanted to get in the weight room more, like get outside and do more drills on my quickness and my lateral drills, just try to help myself out for the summer and the season.”

Massey also has the bloodlines.

His father is Chris Massey, who starred in high school at Spiro, Okla., just across the border from Fort Smith. Chris Massey went on to play defensive back and was a return specialist for Oklahoma State in the early 2000s.

“I heard a lot of stories about him, but I really haven’t seen him play, so I can’t really tell you what he did or what he didn’t do, but I heard he was a great player and he really helps me out on the football field,” Ty Massey said.

While Ty cites his father as a huge influence, the younger Massey also preferred to try to make a name on his own accord.

Church actually didn’t play football when he first got to Northside, having sat out his sophomore year as he preferred to play basketball instead. But he had second thoughts about resuming football, which he had played at an early age before concentrating on basketball.

“Just seeing my brothers out there having fun and really just missing it because football was something of a passion; I had been playing it since I was little and just taking the time off just really showed how much I missed it and I can’t really stay far from it,” Church said.

He emerged down the stretch in the 2020 season, notably in the Grizzlies’ regular-season finale, as he opened the scoring with a first-quarter touchdown as Northside went on to a 45-0 win against Little Rock Southwest.

“I like being shifty, I like seeing the holes and then if a player is in front of me, I’m going to hit them; I’m a hit-first type of player,” Church said.

Church also extensively prepared all offseason knowing he was going to get some more carries.

“I wanted to get stronger and faster,” he said. “(Assistant coach Curtis) Curry had speed training for all of us to get faster and quicker, and I can say that helped my game tremendously.”

And should opposing teams key more on the duo, the Grizzlies have other ways to get things done offensively. Senior quarterback Walker Catsavis threw for 291 yards and three touchdowns, two coming in the final two minutes, in last week’s win.

“I’ve grown up playing against (Church and Massey) my whole life and finally getting to be on the same team with them is like a dream come true,” Catsavis said. “Everyone knows the offense runs through them quite a bit, and so really how they go is how we go, too, so they’re just as important as I am to this offense.”

The duo of Massey and Church hope to produce more big numbers as the Grizzlies (3-0) start 7A-Central play. But their first conference game presents a huge test, as three-time defending 7A champion Bryant (2-1) comes to Mayo-Thompson Stadium on Friday night.

“Last year was definitely a learning phase, like just getting everything down (due to COVID-19 as well as learning the system implemented by then-first year offensive coordinator Greg Kendrick), so it was really a process leading into this year,” Church said. “That just really made us into who we are now.”