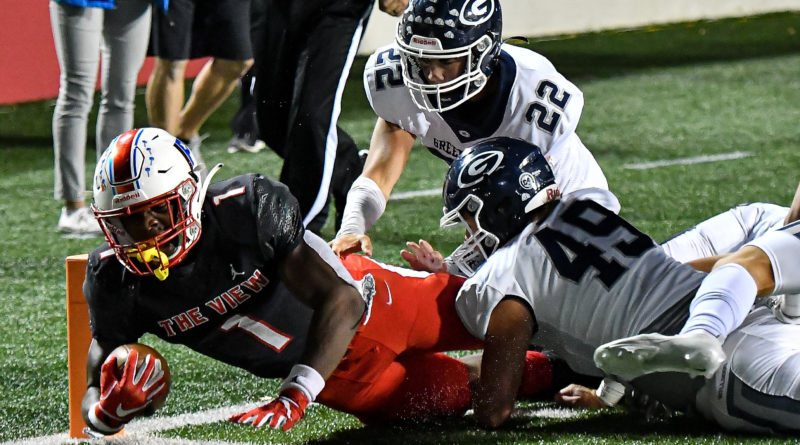 LITTLE ROCK — James Jointer showed the fans at War Memorial Stadium why he has given the University of Arkansas an oral commitment.

Jointer, the senior running back for Little Rock Parkview, rushed for 270 yards on 31 carries with five touchdowns, lifting the Patriots (4-0, 1-0 6A-West) to a 48-28 conference-opening victory on Thursday night over Greenwood (2-2, 0-1), the defending Class 6A state champion.

“First of all, I want to thank my offensive line,” Jointer said. “Our quarterback (Jaylin White) was a little banged up (with a sore leg) and I put it on my shoulders tonight to do whatever it took to help us win.

“I’m not shocked by what we did. We were underdogs and we were looking forward to meeting them last year but didn’t get to play because of COVID. More than likely, we will see them again.”

As a team, the the Patriots rushed for 361 yards on 52 attempts and had 21 first downs.

“That is a good team, and they made us look bad,” Greenwood coach Chris Young said. “Jointer is a very physical back. I know we had some people lined up a few times, and he ran through them.”

Greenwood, which was coming off a bye week, was without quarterback Hunter Houston, running back Javon Williamson and defensive linemen Landon Kilgore and Tyler Crossno, who were all injured.

Sophomore Slade Dean filled in at quarterback and completed 14 of 30 passes for 277 yards with three touchdowns. LJ Robins led the Bulldogs with nine catches for 183 yards and one touchdown. Jake Glover led the Bulldogs in rushing with 123 yards on 15 carries.

“Parkview has all the ability in the world, and they just flew around us and look like an all-star team,” Young said. “This was a tough night because we put our sophomore quarterback in a tough situation.

“We’ve got to go back to work and need to be concerned about ourselves and not about Parkview.”

The Patriots didn’t take long in taking the lead when Willie Eackles returned the opening kickoff 95 yards for a touchdown. Tavion Haney’s kick was no good, leaving the Patriots up 6-0.

Greenwood quickly responded when Glover ran 63 yards over the left side to give the Bulldogs first-and-goal at the Patriots 5-yard line. Two plays later, Dean threw five yards to Aiden Kennon in the right side of the end zone. Ben Moy’s kick gave the Bulldogs a 7-6 lead.

Parkview came back with a seven-play, 66-yard drive that saw Jaylin White throw 21 yards to Jointer, giving the Patriots a first down at the Bulldogs’ 24. Two plays later, Jointer scored from 21 yards. Haney’s kick was good and the Patriots were up 13-7.

The Bulldogs took a 14-13 lead with 4:08 left in the first quarter on a 1-yard run by Dylan Tucker and Moy added the extra point. The touchdown was set up on an 80-yard pass play from Dean to Robins, who made several moves on Greenwood defenders to get down to the 1 before he was tackled.

With 7:51 left in the second quarter, Glover fumbled and Xavier Branch recovered at the Bulldogs 17. After a false-start penalty, Jointer ran 22 yards around the left side. Haney’s kick was good and the Patriots led 20-14.

With 3:04 left in the first half and the Bulldogs facing fourth-and-five at the 50, punter Noah Jantzen was tackled for an 11-yard loss when he tried to run to the right side. Jointer carried the ball on the last four plays with a 19-yard run setting up a 2-yard touchdown run with 44 seconds left in the half. Haney’s kick made it 27-14.

Greenwood needed two plays to close to 27-21 when Dean found Robins for a 55-yard touchdown 40 seconds into the third quarter, with Moy adding the extra point.

The Patriots responded with a six-play, 65-yard drive with Jointer scoring from 37 yards at the 8:26 mark. Haney’s kick was good and the Patriots led 34-21.

After Parkview was turned away on downs at the 50-yard line, the Patriots needed four plays to get in the end zone with Jointer’s 31-yard run setting up a 13-yard score with 5:54 left.

Greenwood added one last touchdown on a 5-yard pass from Dean to Luke Brewer with 4:16 left to set the final margin.

“I was part of Greenwood’s first state championship team in 2000, and I know they weren’t going to be getting caught in the hoopla of playing in War Memorial Stadium since they’ve been here so many times,” Bolding said. “This is a big win, and we’re going to enjoy it, but we’re a blue-collar team that clocks in and clocks out at work and keep our focus.”