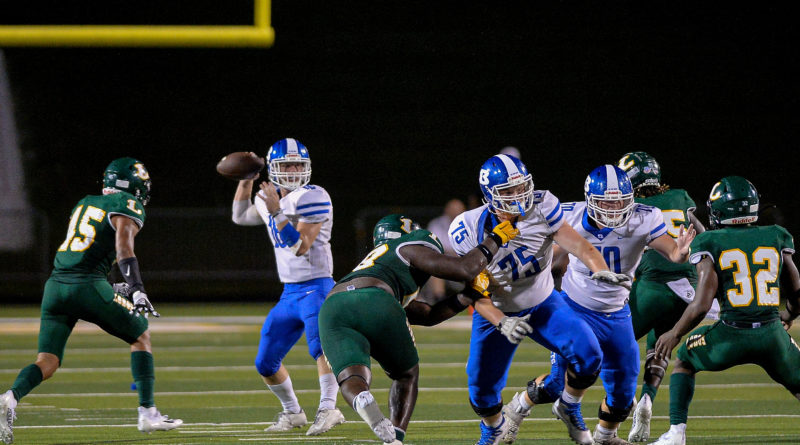 The Week 4 slate was lighter with several of the Top 25 teams enjoying a bye week, so there weren’t many changes. Bryant did lose 24-21 at Texas juggernaut Longview but remains atop the rankings.

Little Rock Catholic drops out after losing its third straight and Little Rock Parkview makes its debut at No. 20 after finishing the nonconference slate undefeated.

After a 24-21 road loss to Texas power Longiview, the Hornets stay at No. 1 but face a tough test at surging Fort Smith Northside on Friday to begin 7A-Central Conference play.

The Charging Wildcats should stay undefeated with a 7A-Central opener against struggling Little Rock Central, but next week they will travel to Conway for a big showdown of Top 5 teams.

The Wampus Cats get a 7A-Central tune-up with Little Rock Southwest this week before the big road showdown with North Little Rock next week.

The Tigers enter their 7A-West Conference opener at 0-3 Springdale Har-Ber riding a 32-game league win streak and are gunning for their 15th conference title in the past 16 years.

The last time the Saints lost to Sand Springs (Okla.) Page they ran the table on their way to the Class 4A state championship. History could repeat itself this season.

After a 68-24 loss at Lipscomb (Tenn.) Academy two weeks ago, the Bruins look to get back on track with a 5A-Central home opener against Watson Chapel .

After Fort Smith Northside ended their 16-game win streak two weeks ago, the Bulldogs travel to take on undefeated Little Rock Parkview in one of the games of the week.

Even with two nonconference losses, pundits continue to like the Purple Dogs to contend in the 7A-West, and an opener at Bentonville West will be a good measuring stick.

The Wolves make the long trip to Mountain Home and Siloam Springs this week and next, but they should cruise to easy wins.

The Warriors cruised through the nonconference slate but on Friday host a dangerous Maumelle team, which could easily be undefeated.

The Grizzlies have gotten off to a fast start, and if they beat Bryant at home this week, they go from ‘surprise team’ to title contender.

The Wolverines could make a major statement by knocking off highly regarded Fayetteville at home in the 7A-West Conference opener for both teams.

The Panthers, fresh off a shellacking of Little Rock Catholic, host a Russellville squad that is much improved from a season ago.

The Wildcats have turned heads with their athleticism in the nonconference season, especially with a strong performance at Cabot, but they face the tall task of beginning the 6A-East Conference slate at Jonesboro in a game that could decide the conference title.

The Wildcats are in danger of starting 0-4 for the second straight season despite having one of the more explosive offenses in Class 7A.

The Hurricane played back-to-back nonconference road games against Cabot and Conway and now must open the 6A-East Conference slate with El Dorado, but the good news for Jonesboro is the game is in Craighead County.

The Yellowjackets open 5A-East Conference play with a home tilt against Brookland, which nearly started the season 3-0 but lost narrowly to Rivercrst last week.

The Patriots make their Top 25 debut after blowing out Pine Bluff to start 3-0 and could make a big statement in Class 6A with a home game against defending Class 6A champion Greenwood on Thursday night.

The Lumberjacks begin their quest for a 8-4A Conference title with a home tilt against Crossett, which might be their toughest test of the season.

The Wildcats finish the four-game nonconference slate against Briarcrest (Tenn.), which beat them last season, 63-28.

After a blowout at Warren two weeks ago, the Ricebirds will try to regroup against Southside in the 2-4A Conference opener.

The Redbugs stay at No. 25 despite the lopsided loss to Class 4A Monticello and now start 8-2A Conference play against Clarendon and University of Arkansas do-everything commit Quincey McAdoo.