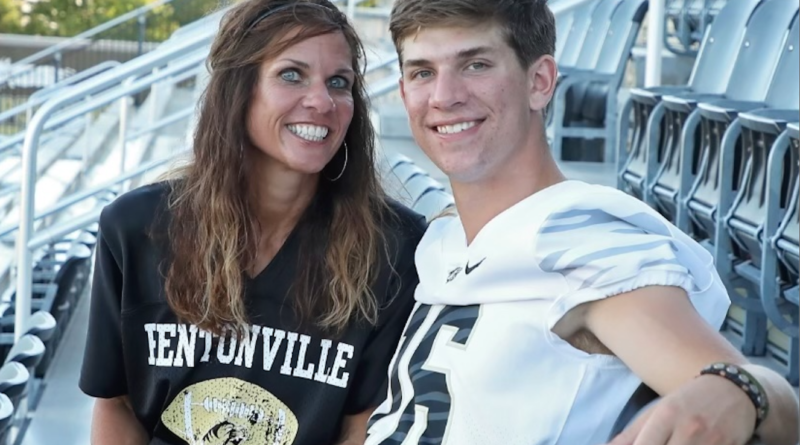 Bentonville senior quarterback Drew Wright has company when he settles into his Sunday evening routine of watching game film in the family living room.

Wright scouts the opponent with help from his dad, Dan, a former University of Arkansas and MLB pitcher, and his mom, Robin, a former all-state basketball player at Bentonville and a letterman on the UA women’s basketball and softball teams in the mid-1990s.

Robin was a standout Tigers athlete long before Drew came along making his presence felt on the baseball and football fields. In addition to starring on the hardwood, she ran track and cross country and played softball.

She walked on the University of Arkansas women’s basketball team and started one game in two seasons. Former Hogs coach Gary Blair introduced Robin to new UA softball coach Carrie Dever-Boaz, who was establishing the program. Dever-Boaz promised to turn Robin, who only played slow-pitch softball at BHS, into “a slapper” and she played three seasons under the new coach.

It was at Arkansas where she met Dan. The couple married and Dan began a pro baseball career that eventually took him to the Chicago White Sox, where he spent four seasons before arm surgeries ended his career as he tried to come back with the Seattle Mariners in 2006. When Dan’s career ended, he became a scout. He currently is an advance scout scouring MLB ballparks for talent for the Philadelphia Phillies.

“We laugh because once we got married, baseball has been a part of our lives, and we have never had a 12 full months together,” Robin said. “During the COVID year (when the MLB season was postponed in 2020), he was at home, and he enjoyed it. It was extremely hard for him to go back on the road.”

Dan makes it home most Friday nights to see Drew and the Tigers (2-1), but his schedule of being on the road from April until November (when fall leagues end) has made it so Robin, an insurance agent, was more involved in Drew’s sports activities as he grew up, getting him to games and practices. She even coached Drew’s fist year of baseball in the machine pitch division.

“We have a fun and awesome relationship,” she said. “We have a close bond with sports.”

Drew’s varsity baseball career has come along quicker with the Tigers as he has started at first base and pitched since his sophomore season. He received playing time on the football field last season but got his first start in the Tigers’ opener last month — a big 43-30 win against Kansas City-area power Liberty North, which is ranked No. 3 in the SBLive Missouri Top 25.

“First of all, I am thrilled he is getting a chance to be out there,” Robin said. “He has worked so hard and is playing with the teammates he has played with since he was a little boy. From a momma’s standpoint, I get a little emotional and tear up a little bit seeing them all out there together. I am just so proud of him. He is excited to be out there, and all of the kids have worked so hard through the years. It is neat to see.”

She might have gotten a little emotional, but she held it together enough to record every snap Drew took in that game with her phone — as she will continue to do all season. Even though he will watch film of the game later, he likes to watch the clips immediately after the game. She carefully records and doesn’t cheer.

“When the defense comes on the field, I am a fan and yell and cheer,” she said. “I do the same thing with baseball. As soon as the game is over, he is in his truck (watching the clips).”

Not only is Drew a standout athlete but he is also an honor student. Robin was the same and earned a masters degree in business at Arkansas while coaching softball at her alma mater for a year in an interim role as she finished. Drew has opportunities to play basketball or football at Hendrix College in Conway, but he is undecided on what sport he will play or what program he will choose.

“Drew told (Bentonville baseball coach Todd Abbott) this summer that he wants to play a sport in college and isn’t ready to hang it up, so he will play whichever sport he gets an opportunity to play in college.”

Robin adds that junior college is also an option.

For now, the couple is just soaking up the time they have left with their only child at home. And that means sitting beside him on the remaining Sunday nights of football season, helping him to hopefully direct a Tigers state championship run with the 7A-West Conference season beginning against Springdale Har-Ber on Friday night.

“I am one of the most competitive people you will meet, and he knows I will push him,” Robin said. “He knows you have to study to be prepared and work your butt off. He’s done that. He knows we are big believers in that and don’t like excuses. He sees his mistakes (on film) and works hard to correct them.”