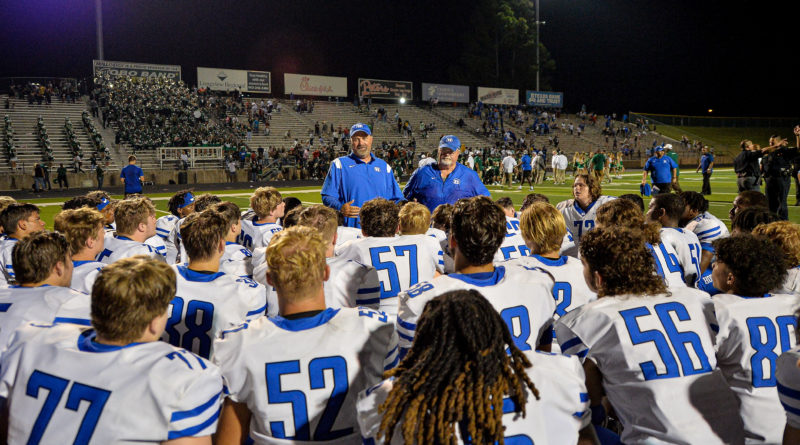 Bryant’s win streak came to an end at 32 games Friday night with a 24-21 loss to Longview.

Jalen Hale recovered a fumble by quarterback Jordan Allen with 1:00 left in the third quarter to put the Lobos up 17-14 and caught a 20-yard pass from Allen with 5:20 left in the game which put the Lobos up 24-14 to seal the victory. Hale is one of the top receivers in the country with scholarship offers from Alabama, Arkansas and Oklahoma, among many others.

Bryant added a 24-yard touchdown pass on the final play of the game from Carson Burnett to Robert Hendrix to set the final score.

The loss is the first for the Hornets (2-1), the three-time defending Class 7A state champion, since a loss to North Little Rock in the 2018 regular season. Longview is now 3-1 on the season.

“I thought we played hard, but I don’t think we played very smart,” said Bryant coach Buck James. “When you play a team like this caliber, in this environment, it’s the little things that make a difference and we didn’t make some plays. We gave up a cheap touchdown before half because we didn’t make the play, and they got one on a jump ball.

“We just didn’t make the plays we needed to make. When you play in a big-time game, you’ve got to be a big-time player.”

The Hornets were held to 54 yards rushing on 27 attempts with Chris Gannaway leading the way with 48 yards on 15 carries. Quarterback Carson Burnett was held to six yards on 12 carries with four sacks. He completed 15 of 28 passes for 238 yards with two touchdowns and one interception.

Mytorian Singleton led the Hornets with five catches for 76 yards and a touchdown.

Longview was led by Jarrett Lewis, who rushed for 135 yards on 18 carries as the Lobos rushed for 216 yards on 52 attempts and held the ball for 14 more plays (69-55). Allen came off the bench in the third quarter to spark the comeback by completing 3 of 4 passes for 36 yards and rushing for 29 yards on seven carries. Hale caught two passes for 86 yards with both going for touchdowns.

Trailing 10-7 at the half, the Hornets took advantage of a fumble by Allen on his first play of the game, at the Longview 6 at the 3:50 mark of the third quarter. Two plays later, Burnett went up the middle on a keeper from five yards and Stephen Fuller added the extra point to put the Hornets up 14-10.

After a short kickoff, coupled with a 20-yard return by Longview’s Amarian Hamilton and an offside penalty by the Hornets that gave the Lobos a first down at their 46, Longview needed six plays to get into the end zone. Lewis ran 29 yards to give the Lobos a first down at the Hornets’ 14. After a nine-yard run by Allen and an incomplete pass, Allen went up the middle but fumbled the ball at the goal line. Hale recovered the ball to give the Lobos at 17-14 lead after Michael Fields added the extra point with a minute left in the third quarter.

Three plays later, Burnett was intercepted by Willie Nelson at the 11:52 mark of the fourth quarter, giving the Lobos the ball at the Hornets 48. Longview put together a 10-play drive that featured two fourth-down conversions, with Allen picking up a first down on fourth-and-one and his second one coming when he found Hale on a jump ball in the right corner of the end zone with 5:20 left. Fields’ kick made it 24-14.

Longview took a 10-7 halftime lead thanks to a 66-yard pass from Joshua Thomas to Hale with 39.4 seconds left in the second quarter.

Taking over at their 12 with 1:33 remaining in the first half, the Lobos converted a third-and-nine from their 13 on a 21-yard run by Thomas. One play later, Thomas, who completed 4 of 12 passes in the first half for 99 yards, threw a pass down the middle of the field. Hale out-leaped Bryant defensive back Joshua Rice, who had a chance to intercept the ball. Hale outran the Hornets defense to the end zone and Fields made the extra point to make it 10-7.

Bryant took a 7-3 lead at 4:10 of the second quarter when Burnett found Alec Humphreys for 43 yards on third-and-12 which gave the Hornets a first down at the Longview 25. One play later, Burnett found Singleton in the end zone for a 25-yard touchdown pass. Fuller’s extra point was good and the Hornets had a brief 7-3 lead.

“It’s a big game against a championship-caliber opponent. This is the equivalent of playing North Little Rock or Cabot,” James said. “We’re going to have to go to Conway and have to go to Cabot. It’s going to be the same environment there and we’re going to have to make plays. That’s what we didn’t do tonight. We just didn’t make the plays in the situation that it called for and that’s the difference between winning and losing.”