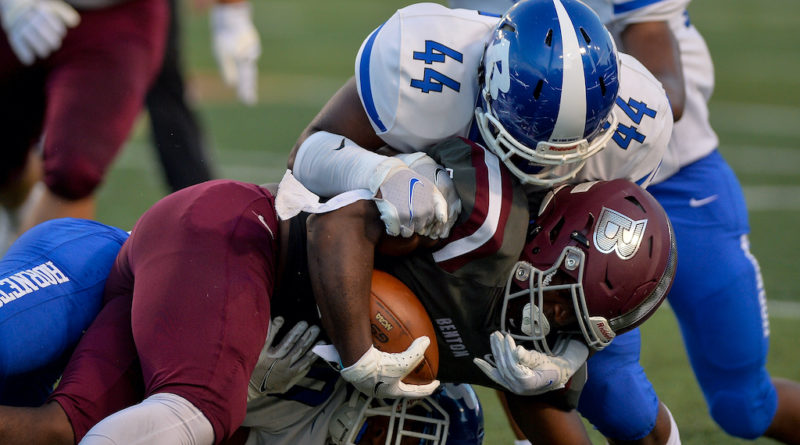 This week’s slate isn’t as packed with as many great games since it is the fourth playing date with the addition of Week Zero games. However, a few games stand out, including two big ones that involve out-of-state powers.

The Hornets play one of the toughest nonconference games in the Buck James era, traveling to play the tradition-rich Lobos.

Longview, which played for a Class 6A state title in 2018, was 9-3 last season. Denton Ryan, the eventual Class 5A Division I state champion, ended Longview’s season with a 27-9 win Dec. 26 in a regional semifinal.

Ryan pasted Longview in the 2021 season opener, but the Lobos have enjoyed two blowout wins since. Coach John King is 190-41 in his 18th season.

Bryant, which rides a 32-game winning streak, has surrendered one touchdown and committed one turnover in lopsided wins against Bryant and Marion.

The Tulsa-area team was the only squad to knock off the Saints last fall. The Class 6A-II Sandites held on to beat SC 27-26 on their way to a 7-5 finish that culminated in the second round of the playoffs.

The Sandites are 2-0 this season and No. 8 in the SBLive Oklahoma Top 25 rankings.

Shiloh Christian, a Class 4A program, is ranked No. 6 after walloping Pear Ridge in Week Zero and outlasting another Oklahoma power, Poteau, on the road in Week 1.

Sand Springs handed Shiloh its only loss in the past year. If the Saints prevail, they might not lose this season on their way to a second straight state title.

The Grizzlies are one of the surprise teams to start the season with a decisive win against cross-town rival Greenwood and then a 29-20 victory at then-No. 3 ranked Greenwood. The Grizzlies are big and tough in both trenches, and Sundquist Church and Ty Massey are making names for themselves as elite running backs.

The Wildcats are in danger of starting 0-4 for the second straight season if they can t beat Northside — and with Bentonville looming in the 7A-West Conference opener next week. The Wildcats’ offense is potent. Led by quarterback Luke Buchanan, it averages 458 yards total and close to 300 yards passing through two games.

The Panthers regrouped after an off week to hammer Little Rock Southwest last week. Catholic is the third straight 7A-Central opponent for Benton.

The Rockets are 0-2 after a lopsided loss at Jonesboro to start the season and then a three-overtime setback to Nolan (Fort Worth) Catholic.

Benton has tremendous offensive firepower with Monticelllo transfer quarterback Stran Smith, who has big-play receiver Cam Harris at his disposal.

The Hornets are one of the surprise teams in the state after blowing out Junction City 39-0 and losing narrowly to Fordyce 22-20 last week.

The Owls are one of the top teams in Class 3A, and the Eagles are the same in Class 4A. The Owls, who played in the Class 3A title game a season ago, are fresh off a 47-22 win against DeWitt in which fullback Channing Woodson piled up 163 yards and two touchdowns. Jody Easter ran for nearly 90 yards in a 54-7 crushing of Dumas in the opener.

Crossett counters with its own potent offensive attack, led by explosive quarterback Tyrique Jones, who has passed for 173 yards and leads the team in rushing with 195 yards.

The Tigers (2-0) haven’t defeated the Hillbillies since 2017 but are playing well to start the season, including a 35-14 win against Class 4A Pottsville last week. Ozark is trying to rebound from a 35-14 loss to Class 3A rival Booneville last week.

The Rams have won three of the past five meetings against their former conference foe and are searching for their first win after playing 6A opponents Lake Hamilton and Sheridan.

Both teams are paced by star quarterbacks. Senior Lakeside signal-caller Sam Mills has completed 50 percent of his passes for close to 300 yards. Malvern junior Cedric Simmons has passed for 235 yards and rushed for 161.

One of these teams will get its first win Friday night. Mountain Home has been close, losing narrowly to 5A foes Harrison and Nettleton. Both hope a win here will help jump-start their beginning to conference play next week. Batesville held on for a 49-45 win last season.

There is excitement in the air at Brookland with the Bearcats starting 2-0 with narrow wins against Gosnell and Jonesboro Westside. However, tradition-rich Rivercrest (the team’s upset bid of Valley View last week fell just short) will offer a much larger challenge than the other two opponents.