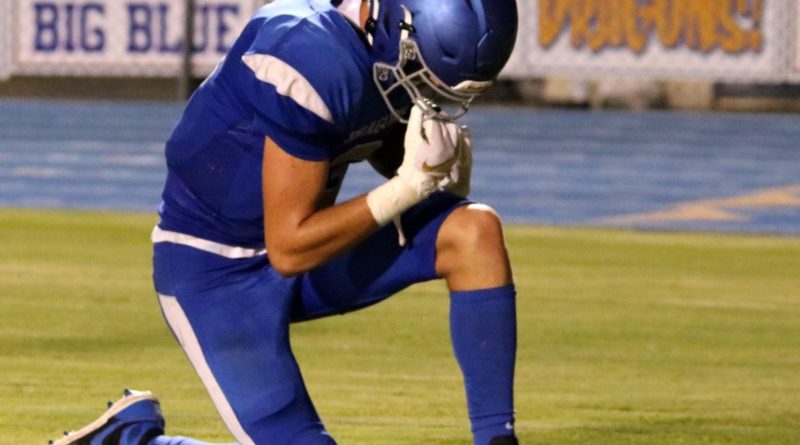 Dax Courtney is convinced he will return quickly from a recent season-ending knee injury. You know why? Because he’s been there and done that.

Courtney, a Clarendon High School senior, played at DeWitt High School the past two seasons. He dislocated his knee and tore a tendon last fall with the Dragons, but he was able to play through the injury. He had surgery on the knee in January, and the University of Arkansas tight end commit was completely recovered by this summer.

He tore his ACL in the other knee in the Lions’ season opener at Barton. He underwent surgery Thursday afternoon.

On a FaceTime call Monday, Courtney was surprisingly perky for a teenager facing his second major surgery in a year knowing his senior football season is over and the start of his college football career could be delayed. Positivity worked for him before, and he’s choosing that same outlook the second time.

“I don’t think (the injury) is something that is going to end it,” Courtney said. “I think it is only going to make me better in the long run. Right now, I am just trying to keep my faith and stay tied into the game and keep my upper body strong since I can’t do much with my lower body right now and get into recovery the best I can.”

As expected, Courtney, who has also starred in basketball and baseball in high school, was more melancholy the night of the injury. He texted his father, Mark, Clarendon’s first-year coach, after the game expressing disappointment that he wouldn’t be able to play for his dad his senior year.

“It’s weird because I have probably felt worse for some of my other players that were injured during their senior year,” said Mark Courtney, who had stints as a head coach at EPC, Dumas and DeWitt. “I had two (former players) that I know of that tore ACLs their senior year. That is it for them. With Dax, I know he has a future ahead of him.

“The biggest thing that bothered Dax about it was that he had played his last game with me. When I read the text the next morning, that kind of hit hard a little bit, but I told him that we have played a lot of sports together — more than most dad/son combos in the country. We have done baseball, we have done football, we’ve done basketball, and we’ve done a little discus throwing. We have had our run, and I couldn’t be prouder of him or my older (son) on how they carry themselves.”

Still, Mark Courtney acknowledged, “It hurts because it is his senior year, and we are fixing to do something special here at Clarendon this year.”

But two weeks later, the focus has moved to surgery and rehab.

Mark Courtney said the first rehab process went well and the biggest problem his son had was working too hard, prompting the surgeon and physical therapist to scale back his routine.

“I do probably push myself too hard,” Courtney said. “People always ask me about my (light weight), and my weight is because … it isn’t because I don’t eat. It’s because I do a lot of stuff — like, constantly. I’m always working out.”

His other focus during this time will be supporting his new Lions teammates, who have a chance to make a deep Class 2A playoff run. He has bonded quickly with the team, especially fellow Razorbacks wide receiver recruit Quincey McAdoo.

“It’s nothing but the best for those guys — they welcomed me with open arms,” Courtney said. “And we have put in a lot of work together. Once you do that with some people, you form a bond that is more like a brotherhood rather than just teammates. At this point, I can’t play and help on the field, so what I am trying to do is stay in dad’s ear the whole time, trying to tell him what I think they should do.”

Before the injury, Mark Courtney said the plan was to have his son, who is 6-foot-6, report for fall camp at 225 pounds. That is about 15 pounds less than he weighs now. The UA strength staff said they thought Courtney could pack on another 15 or more pounds to get to 240 next year and eventually weigh 250.

Courtney, who has been clocked with a 4.7-second 40-yard dash time, also looks forward to shaving a tenth or two off that time once he is healthy and under the direction of the UA staff.

The injury might have put a wrench in the weight-gain plan, but he still has hopes he can put some weight on before he reports.

When Courtney does fully heal, he’ll once again have a greater appreciation for being able to play football with more determination to make a splash at Arkansas.

“It is going to be interesting to see because it’s the second knee in two years,” Mark Courtney said. “It’s gong to be fun to watch, actually. Obviously, I am not glad it happened, I wanted him to play for me, but after seeing what he did before, I know he will be back and competing hard. He has so much passion.”