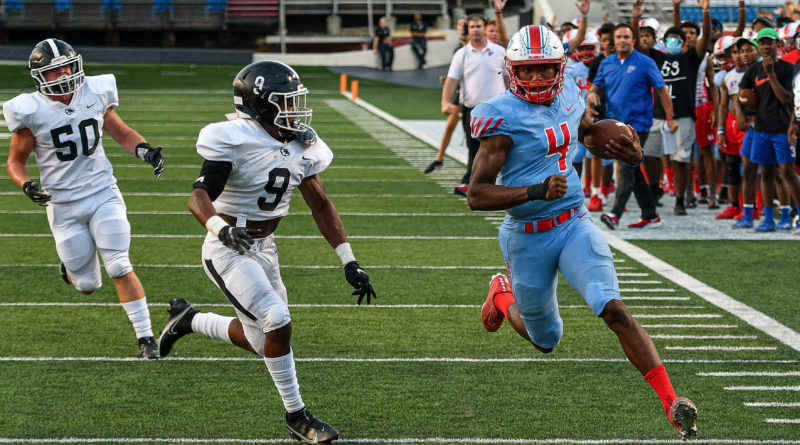 By Jeff Halpern I Photos by Jimmy Jones

White, the Patriots’ senior quarterback, rushed for 277 yards on 20 carries with two touchdowns as Parkview (2-0) remained undefeated. White Hall fell to 2-1 on the season in a matchup featuring brothers as head coaches: Brad Bolding at Parkview and Bobby Bolding at White Hall.

“We put it all on [White] tonight,” Brad Bolding said. “He’s one of those guys who you want carrying the ball when the game is on the line and tonight, it was very physical because they hit him a lot.”

Bobby Bolding said, “We fought them on every play, but we were outmanned tonight. Offensively, they just whipped us.”

The Patriots ran for 320 yards and had 18 first downs, overcoming seven penalties for 85 yards and two interceptions by White in the first half. In addition, they had four possessions in which they got inside the White Hall 20 and came away with no points.

Despite holding White Hall to 224 yards, including 183 yards rushing, the Patriots didn’t have the win sealed until Bulldogs senior quarterback Matthew Martinez was stopped a yard short of converting a fourth-and-two at the Patriots 49 with 25 seconds left.

“We had some playmakers come up and make some plays on that drive,” Brad Bolding said.

Bobby Bolding said, “We couldn’t finish a lot of drives. We didn’t have time to drop back and pass and had to throw a lot of quick passes.”

Martinez finished 7 of 20 for 41 yards and one interception. Zaire Green led the Bulldogs with 104 yards rushing on 16 carries.

White ran 19 yards for a touchdown at the 6:51 mark of the first quarter after the Patriots took over on the White Hall 23 following a 31-yard punt by White Hall’s Caleb Taylor two plays earlier. Tavion Henry’s extra point was no good.

Parkview needed two plays to re-take the lead when White ran 68 yards around the right side. Henry’s kick was good and the Patriots lead 13-7 with 5:12 left in the first quarter.

After a White Hall punt, the Patriots kept the ball for 16 plays marching from their 7 to the White Hall 12 before two passes from White to Parker Perry and Hunter Austin on third and fourth down fell incomplete, ending the drive at the 8:41 mark of the second quarter.

White Hall answered with its time-consuming drive, marching from its 12 to the Parkview 8 in 16 plays, converting three third downs and picking up two first downs on a penalties. After Martinez threw incomplete to Weston, Barnes came on and converted a 25-yard field goal with 2:27 left in the second quarter to make it 13-10.

After White Hall punted back to Parkview with 27 seconds left in the half, White threw 20 yards to Austin at the White Hall 19 before he was intercepted by Weston with 8 seconds left.

White Hall reached the Parkview 32 in five plays to start the second half before Martinez’s pass to Jordan Jackson fell incomplete at the 8:35 mark.

Parkview responded by marching from its 32 to the White Hall 10 in eight plays before White fumbled the snap on third-and-two and was held to one yard on fourth-and-two.

After that, the next five possessions featured four punts and one interception by Parkview’s Trent Bennett.

White Hall was plagued by poor field position as it started three drives in the second half from its 9, 11 and 1.

“It seemed like we had a long field all night,” Bobby Bolding said.

Parkview looked to ice the game when it marched from its 6 to the White Hall 24 in six plays thanks to 29- and 27-yard runs by White before a holding penalty pushed the Patriots back to the White Hall 36 with 1:56 left. Two plays later, Haney punted the ball to the White Hall 14 before Braylon Johnson returned it 14 yards to the White Hall 24. Martinez completed 4 of 7 passes on the drive to the Parkview 49 before his run around the left end came up a yard short.

Both Boldings had different viewpoints of facing each other.

Brad Bolding said of playing his brother, “This is a typical game because we’re so similar offensively and defensive and we’re both fundamentally solid.”

Bobby Bolding said, “It hasn’t mattered a lot since we first played in 2003 when I was at Stuttgart and he was at Mayflower. I get kind of tired of the talk because we both do this for the kids.”