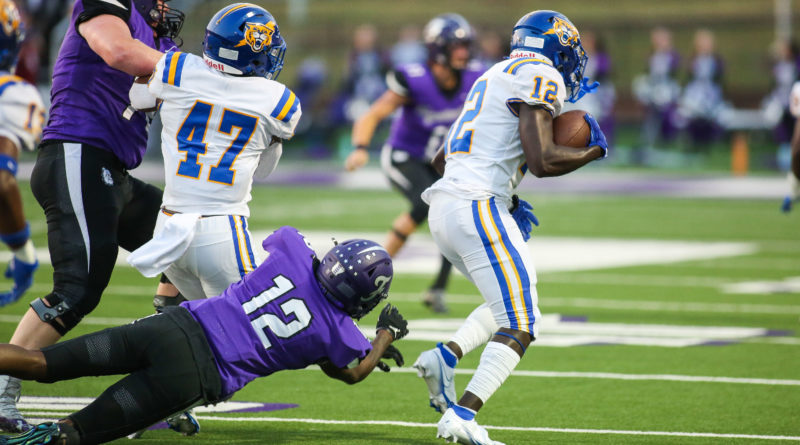 FAYETTEVILLE – As expected, the heavyweight battle between 7A-West power Fayetteville and its nemesis North Little Rock, from the stacked 7A-Central, lived up to its billing Friday night at HarmonField. But with the expectations of offensive fireworks, it was the two defenses that stole the show in the Charging Wildcats’ 14-7 victory.

The game was still in doubt with two minutes to play, when North Little Rock put it all on the line and decided to go for it on 4th-and-1 from its own 24. The Wildcats’ hopes rested in the legs of 185-pound junior tailback Torrance Moore, who took the handoff to the right side and squirted off tackle for a a six-yard gain – and a back-breaking first down for the Bulldogs.

“There was no doubt about it, that we were going for it,” said first-year North Little Rock head coach Randy Sandefur. “We did not come up here to lose at the last second, or come up here to tie, we came up here to win a football game. Our offensive line just stuck their hand in the ground and got after it, and out running back was able to make the play.

“And I had all the confidence in the world that if we didn’t make it our defense was going to go out there and stop them from scoring.”

Moore rushed for 91 yards on 27 carries, but none more important than his game-clinching first down.

“The only thing that was going through my mind was, ‘We got to get this, because if we don’t, the game could go their way’,” said an elated Moore after the game. “This is a big win for us. They got a couple of D-I guys, so we were expected to lose, but we came out here and played our hardest. I think we just played harder tonight.”

“That game could have gone either way, so I’m just glad we’re on this side of it,” Sandefur added. “Being able to go on the road and win is big, playing in a hostile environment. And beating that caliber of a football team, who is well-coached, is big. Fayetteville is going to win a lot of football games this year.”

The Bulldogs looked to deliver the first blow on their opening drive of the game. After forcing a three-and-out on North Little Rock’s first possession, Fayetteville marched down to the Wildcats’ 11. But just as the Bulldog ball carrier was about to reach the goal line, the ball was knocked loose and went through the back of the end zone for a touchback.

“I think we just refused to break on defense,” Sandefur said. “No matter how many times we had to go back out there and play defense, we were going to go do it.”

Matter of fact, it was the Wildcat defense that put the first point on the board, when defensive back Josh Thrower picked off a Bulldog pass and rambled 63 yards for a touchdown with 2:52 left in the first quarter.

After holding Fayetteville on three plays again, North Little Rock needed just five plays to drive the ball 48 yards and extend the lead. Quarterback Malachi Gober hit Moore for a 17-yard scoring strike to make it 14-0 with 18 second left in the opening quarter. Gober completed 8 of 25 passes in the game for 97 yards.

The Fayetteville defense was stellar throughout the game, and the offense began to roll late in the first half. The Bulldogs mounted an 8-play drive that went 83 yards, including four straight completions from quarterback Bladen Fike, who hit a leaping Isaiah Sategna for a 21-yard TD with 1:19 on the clock.

Fike was just 16 of 43 in the game, but threw for 226 yards. Sategna, the top-rated player in the state, caught four passes for 69 yards and had a number of throws just out of his reach. Ironically, fellow receiver Jalen Blackburn had the exact same, four catches for 69 yards, while Dylan Kittell caught four  for 68 yards.

The Bulldogs ran for just 21 yards on 20 carries.

“I think when you go back and look at it, a lot of the things offensively were on us, not making some of those contested catches that we had been making and some of the releases, alignments, and just some of those little things that we needed to do,” Fayetteville coach Casey Dick said. “Hats off to them, because they did a great job and have a very athletic team, but a lot of that was self-inflicted on us.”

The Bulldogs opened the second half with a steady, 10-play drive, but missed a 34-yard field goal to come away empty. On their next possession, a muffed punt-snap gave North Little Rock the ball at the Fayetteville 40.

But a 15-yard sack by Kaiden Turner kept the Wildcats from taking advantage, as the drive fizzled.

“I know we did not play well offensively,” Sandefur said. “We are a work in progress, and we are going to be so good, here before long.”

Defensive back Jaxon Taylor gave the Bulldogs glowing hope midway through the fourth quarter, when he picked off a Wildcat pass and ran it back to the near midfield. They drove the ball deep into Wildcats territory, but after a holding penalty and false start, they turned the ball over on downs at the North Little Rock 15 with 4:09 remaining in the game.

The Wildcats rushed for three first downs to melt the clock away.

“I’m proud of the way our kids competed, from start to finish,” said Dick, the former Arkansas Razorbacks quarterback. “We win or lose as a family, so we’ll just have to go back to the drawing board and get some things fixed, and get them ready to go again next week. There’s a lot we can learn from this game, and those things will make us better for later on in the year.”

Fayetteville is off next week, then travels to Bentonville West on Sept. 24. North Little Rock travels to West Memphis next Friday night.