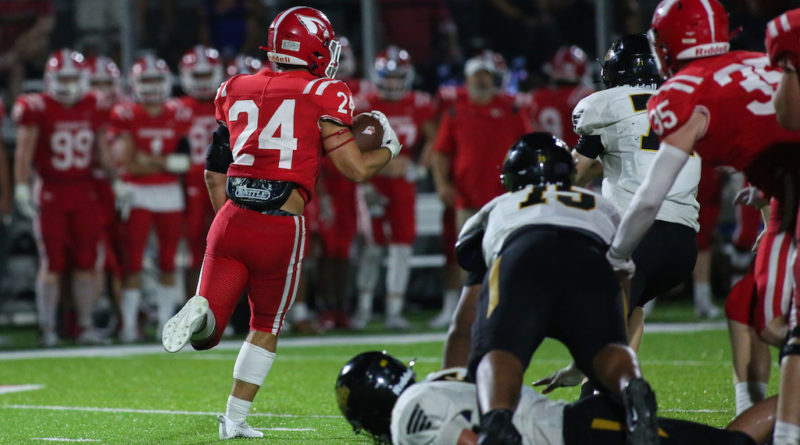 As we begin the third playing week of the high school football season, some teams will wrap up their nonconference slate enjoying a bye before the conference season begins in two weeks, others will wrap up next week. Week 2 features several interesting matchups with Top-10 rankings and others involving powers from other states. See 10 games to watch below.

Fayetteville has been the trendy pick among pundits as the ‘comeback team’ of 2021 and many of those have not looked as highly at North Little Rock, which has appeared in the past five Class 7A state championship games.

The Charging Wildcats are coming off a decisive win against Springdale Har-Ber, and Fayetteville is fresh off a 48-42 loss at Owasso, Okla., the No. 1-ranked team in SBLive’s Oklahoma Top 25 poll.

In a contrast of styles with NLR’s running game, which featured nine ball carriers last week, and Fayetteville’s potent passing game, this matchup could paint a clearer picture on which team is a contender.

This game features two of the top teams in Class 4A and could be a preview of a playoff or even a state championship game.

So far, Stuttgart (2-0) is enjoying a better nonconference start, coming off a 35-14 win against Star City last week. Stuttgart led 21-14 at halftime before puling away in the second half. Warren only trailed Class 5A White Hall 7-0 in the third quarter before losing 35-0. Warren committed four turnovers in the game.

Rest-assured, veteran Warren coach Bo Hembree will have those mistakes corrected and a playoff-type atmosphere could help the Lumberjacks, who have won 11 of the past 13 meetings between the teams since 2000.

For the third straight season, PA travels to the Nashville area to take on a Tennessee prep power (Ravenwood High School the past two seasons). Lipscomb, which is coached by former NFL quarterback and television analyst Trent Dilfer, is the No. 1-ranked team in Class AA in Tennessee and scored nearly 140 points in its first two games, with last week’s game forfeited.

The Bruins have scored more than 50 points in their first two games, including a 63-39 win against Madison (Miss.) Ridgeland Academy last week, so the scoreboard could get a major workout.

The last loss the Saints endured was a year ago to the Sandites. Shiloh will try to avenge that loss in Springdale on Friday night.

The Saints (2-0) fought off another Oklahoma program, Poteau, last week. If Shiloh wins this game, it’s a safe bet the team won’t be tested until the Class 4A state playoffs and maybe not even then.

The Tigers once again welcome another Kanas City metro football power to Northwest Arkansas after holding off Liberty North two weeks ago.

Rockhurst is down on its luck for a slim opening-week loss to perennial power Raymore-Peculiar and a 24-23 setback to Park Hill last week.

Bentonville is fresh off a 55-41 loss against Conway in which it lost four turnovers.

BHS will look to cut back its mistakes and tighten up its defense against a Rockhurst program which doesn’t start the season 0-3 very often.

Dubbed the ‘Bolding Bowl’ as it features brother coaches Bobby (White Hall) and Brad (Parkview). The game is intriguing because of the matchup between brothers but also because the teams are often good, which is the case here.

White Hall hasn’t given up a point in two wins against Sheridan and Warren.

Pakview, which is loaded with Division I talent including senior running back James Jointer, an Arkansas commit, and senior safety Jaylon White, who has been offered by Arkansas and others, slammed Little Rock Southwest 47-0 last week.

Parkview’s firepower will be a good test for a White Hall defense that has been untouchable thus far.

Conway pulled off one of the biggest wins of the young season last week, upsetting Bentonville after losing at Fayetteville the week before. The Wampus Cats were opportunistic, forcing four turnovers in the game.

The Hurricane lost at Cabot last week, stymied by Cabot’s depth. However, Jonesboro hopes its quick-strike offense can keep the team in the game longer with another 7A-Central heavyweight this week.

El Dorado hung on to beat Class 5A rival Camden Fairview last Thursday on a red-zone stand to win the game.

Cabot’s depth has prevailed the past two games and should again this week.

The Panthers try to move to 3-0 after routing perennial power Batesville 43-7 last week.

Arkadelphia endued a lopsided loss to Camden Fairview two weeks ago but rebounded with a blowout of Hot Springs last week.

Greenbrier is trying to avenge a 35-28 loss to Arkadelphia last season.

The Panthers’ high-octane offense is engineered by versatile quarterback Cooper Wilcox, who passed for 90 yards and a touchdown last week and is averaging almost 10 yards per carry.

Class 3A Harmony Grove made a major statement with a 39-0 win against Junction City, Fordyce’s fellow 8-2A member, two weeks ago. Fordyce, the two-time defending Class 2A state champion, won this game last fall, 62-13. It appears the Hornets are much improved, and this game will be another test to determine how much. Fordyce will most likely be without senior quarterback Tre Merrit, who was injured in the season-opening win against Rison.