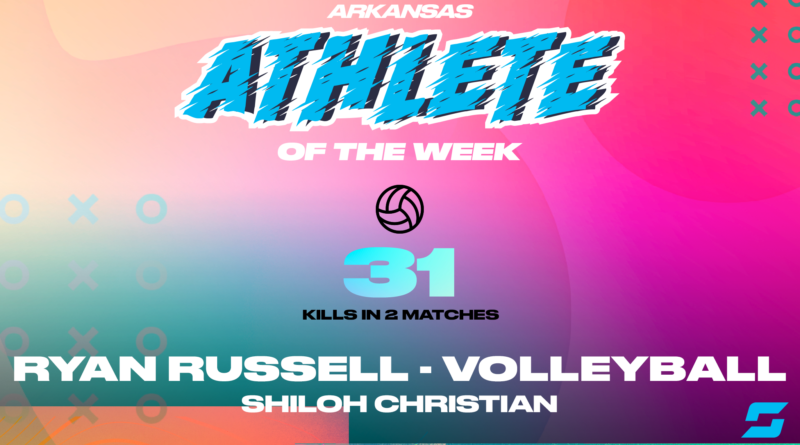 The senior rightside hitter had 31 kills in matches against Hackett and Lavaca on Saturday in the Alma Tournament.

Russell received 41% of the vote, beating out Bentonville’s Trinity Hamilton who finished second with 27.16%. Bentonville’s Drew Wright finished third with 10.77% and Siloam Springs’ Hunter Talley finished fourth with 7.32%. There were over 53,000 votes tallied this week!

Bonanno had 51 digs in matches against Hackett and Lavaca on Saturday in the Alma Tournament.

The new starting quarterback for the defending Class 6A state champion Bulldogs completed 26-of-33 passes for 381 yards and 2 touchdowns in the Bulldogs’ 63-21 victory over Muskogee, Okla.

Fiser, making his first start for the defending Class 5A champion Bruins, completed 17-of-28 passes for 345 yards and 5 touchdowns in 60-27 victory over Pulaski Robinson.

Talley completed 23-of-35 passes for 263 yards and three TDs and rushed for 100 yards and three more TDs in a 51-40 loss to Rogers. He also had seven tackles on defense.

Burnett completed 12-of-14 passes for 227 yard and  2 touchdowns and rushed for 42 yards to lead the three-time defending Class 7A state champions to a 42-3 victory over Benton.

Shepherd rushed for 402 yards on 15 carries with 6 touchdowns in a 51-40 victory over Siloam Springs.

Kattich rushed for 194 yards and 1 touchdown on 21 attempts in a 42-20 victory over Berryville.

Dyer-Jones rushed for 187 yards and 4 touchdowns on 18 carries in a 41-8 victory over Little Rock Central.

Henry caught 5 passes for 123 yards and 2 touchdowns in a 36-24 victory over Springdale.

Creighton had 109 assists in matches against Hackett and Lavaca on Saturday in the Alma Tournament.

Tiffee had 17 kills, 21 digs, 2 blocks and 2 aces as the Lady Mavericks survived a five-set test at Paris.

Melton recorded 17 kills and 12 digs along with 2 blocks and 3 aces at Paris.

Hamilton 42 kills and 34 digs in matches vs. Greenbrier and Springdale Har-Ber on Saturday in the Early Bird Tournament.

Simpson had 59 assists in matches vs. Greenbrier and Springdale Har-Ber on Saturday in the Early Bird Tournament.