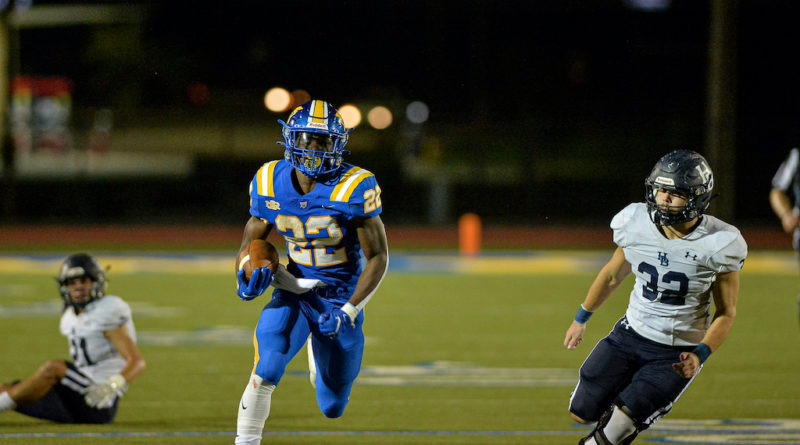 By Jeff Halpern I Photos by Jimmy Jones

Receiving the ball first in the third quarter, the Charging Wildcats quickly put the game out of reach.

“If they had scored there, we would have been behind,” said first-year North Little Rock coach Randy Sandefur. “But we managed to come out and take a two-score lead and that put the pressure on them.

“They were pushing us around in the first half, and in the second half, our offensive line got after them. We made a few adjustments, and they did what we asked them to do.”

Har-Ber coach Chris Wood, whose team committed four turnovers —including three lost fumbles —said that turned out to be the big difference in the game.

“Our first turnover led to seven points. Our second one led to a field goal and the third one could have given us the lead at halftime,” Wood said. “We had four turnovers at McKinney (Texas) and felt like we left 21 points on the field. After that, it seemed like they settled down and out-executed us.”

The Charging Wildcats needed four plays to march 75 yards when the second half began. The drive ended with Malachi Gober completing a 31-yard touchdown pass to Felix Wade on a slant route. Devin Jackson’s extra point made it 31-21 at the 9:52 mark.

Har-Ber marched from its 20 to the North Little Rock 36 in five plays before Luke Buchanan’s pass to Peyton McKee fell incomplete at the 8:25 mark.

Har-Ber’s next drive lasted seven plays before Buchanan’s pass on fourth-and-1 at its 39 was tipped, falling incomplete. Four plays later, Jiquori Stewart took a pitch and scored from six yards out. Jackson’s kick made it 45-21.

After a 20-yard punt gave North Little Rock possession at midfield, Moore went around the right side from five yards out at the 1:24 mark. Jackson’s extra point made it 52-21.

A 21-yard punt gave North Little Rock the ball at its 40 and after a 25-yard run by Javonte Harris, Gober found Johnny Lewis behind two defenders in the end zone for a 35-yard touchdown pass with 11:52 left. The extra point was no good, but the Charging Wildcats had put the running clock into motion for the remainder of the game.

“That third quarter was a learning lesson,” Wood said. “In the first half, they did a nice job of throwing the ball, but in the third quarter, it was like they settled down and ran right after us.”

North Little Rock took to a 7-0 lead at the 9:01 mark of the first quarter when Moore scored from three yards out and Jackson made the extra point.

Har-Ber came back six plays later on a 22-yard run by Brewer to tie it at 7-7 after Fleming added the extra point.

Five plays later, Har-Ber responded on a 59-yard pass from Buchanan to Drue McClendon at the 2:01 mark to tie the score at 14-14 after Fleming’s kick.

Har-Ber took its only lead — 21-17— of the game on a six-yard pass from Buchanan to Luke Adams at the 5:56 mark of the second quarter after Fleming’s kick.

Davian Vayson scored on a three-yard run to put North Little Rock up 24-21 after Jackson’s kick.

The Charging Wildcats had 310 yards rushing on 36 attempts.

“For a guy who had a handful of snaps last year, what Malachi has done is pretty amazing,” Sandefur said. “He’s a real cool customer and he does a good job of not forcing anything.

“We’ve got some good dudes on offense. We try to make things simple for them.”

Har-Ber finished with 436 yards, with Buchanan completing 17 of 34 passes for 259 yards with two touchdowns and one interception. He rushed for 61 yards on 11 carries. McClendon led the Wildcats with three catches for 101 yards and one touchdown. McKee had 10 catches for 95 yards. Brewer led Har-Ber with 64 yards rushing on 16 carries and one touchdown.

“You can see why the only team they’ve lost to in the past two years is Bryant,” Wood said. “They are very physical and got after us.”